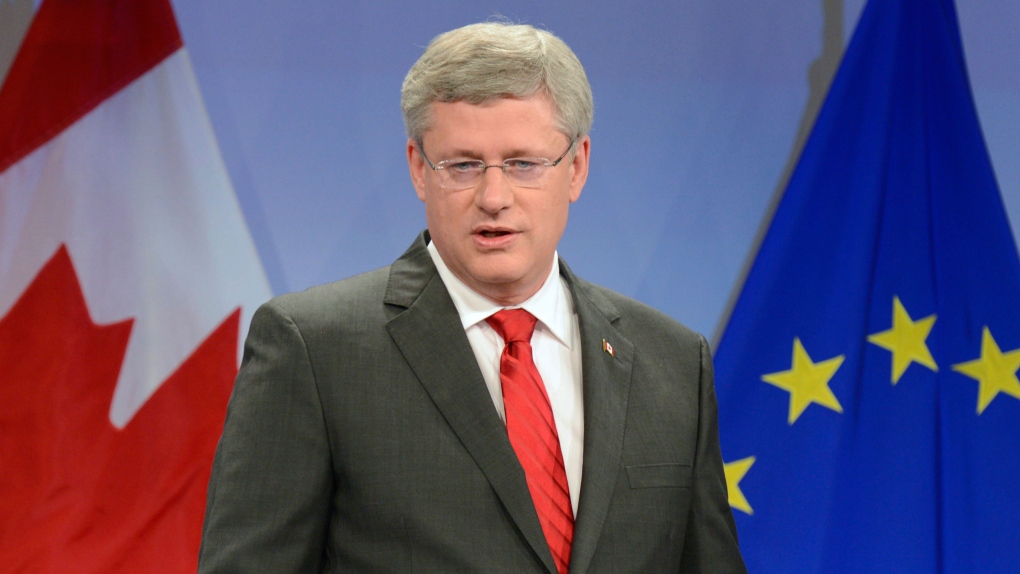 Prime Minister Stephen Harper speaks as he announces a free-trade agreement between Canada and Europe during a press conference in Brussels on Friday Oct. 18, 2013. (Adrian Wyld / THE CANADIAN PRESS)

The vast majority of Canadians support the landmark free-trade agreement with the European Union, according to a new poll.

The Ipsos Reid poll conducted for CTV News asked respondents if they're supportive of the deal, which Prime Minister Stephen Harper has boasted as the "most important" free-trade agreement Canada has ever signed.

The deal -- which is expected to take 18 to 24 months to fully ratify -- is intended to improve the exchange of goods, services, investment and labour between Canada and the 28-member European Union.

According to the Harper government, the far-ranging deal will give Canada access to the EU's hundreds of millions of consumers and trillions of dollars in yearly consumer activity.

However, internal documents obtained recently by The Canadian Press show that European exporters expect to make great inroads to the Canadian market as a result of the deal, suggesting the EU felt it won more concessions than it was expecting.

The deal has already caused some concern for Canada’s dairy farmers, who will face more competition.

The poll found support for the free-trade deal is strongest in British Columbia at 89 per cent, followed by Atlantic Canada at 88 per cent. Support was weakest in Saskatchewan and Manitoba, with only seven in 10 (72%) respondents offering approval.

Meanwhile, Conservative ministers Ed Fast and Maxime Bernier will be in Quebec -- home to 13,000 dairy farmers -- on Monday to highlight the benefits of the Canada-EU agreement for that province.