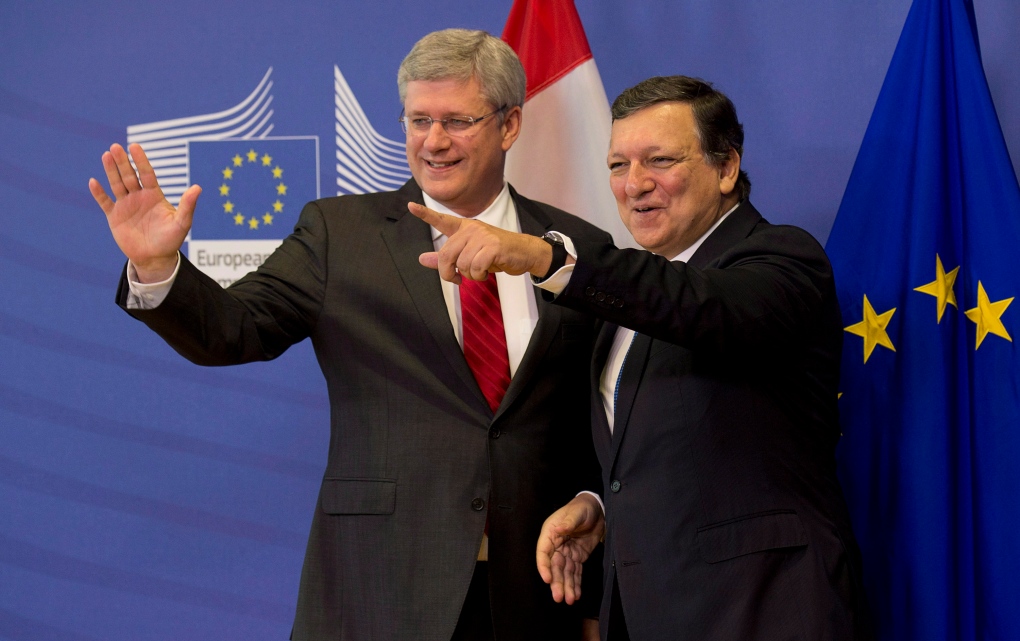 OTTAWA -- Canada and the European Union are hoping the momentum of last week's free-trade announcement will carry over into a troublesome side agreement.

Sources close to the talks say the separate Strategic Partnership Agreement -- which covers non-trade matters such as human rights -- may get a shot in the arm from the recent signing in Brussels of the Comprehensive Economic and Trade Agreement.

That capped four years of negotiations, but it's expected it will take another 18 to 24 months to finish the fine print and ratify the pact. Both sides need to sell it to their member provinces and countries.

The other piece of unfinished -- and related -- business is the Strategic Partnership Agreement, which Canada and Europe began negotiating in 2011 and has been linked to the broader trade and investment pact.

Canada is balking at the inclusion of language in a final text that would refer to the importance of affirming human rights and non-proliferation efforts.

The EU insists that all major agreements it negotiates contain language that promotes human rights and fights the proliferation of weapons of mass destruction -- and it doesn't want to make an exception for Canada.

The EU's new ambassador to Canada, Marie-Anne Coninsx, has said that the two pacts are linked and there won't be a deal on one without the other.

"We have the feeling that there's more mutual understanding after the trip to Brussels," a source close to the negotiations told The Canadian Press on the condition they not be identified.

Conservative cabinet ministers expressed optimism Friday the partnership will be made final.

Foreign Affairs Minister John Baird said he met with Canada's negotiators Friday and said he was encouraged, despite the fact "a few hurdles" remain. He did not elaborate.

"I'm confident we can secure the strategic partnership," Baird said.

"I'm optimistic this won't be any impediment to the trade deal going forward. We're keen to conclude the discussions.

"I hope it will be easier than the trade agreement itself."

International Trade Minister Ed Fast said "discussions at the very highest level" are continuing and have been productive.

"There are very few issues yet to be resolved, and I believe at the very end of the day, we'll be able to conclude that, as we have concluded the actual trade agreement itself."

Baird, Fast and several of their cabinet colleagues were active across the country last week, appearing at events to pump the free-trade deal.

But the strategic partnership has had far less profile until EU diplomats spoke about it earlier this month when asked by The Canadian Press.

In an online summary, the federal government says the partnership will "enable us to act together to project our shared values to third countries on key issues such as international peace and security, non-proliferation, democracy and the rule of law."

Europe fears that if it allows Canada to take a pass on acknowledging human rights and non-proliferation, then other, less democratic countries will ask for the same exemptions in future deals.