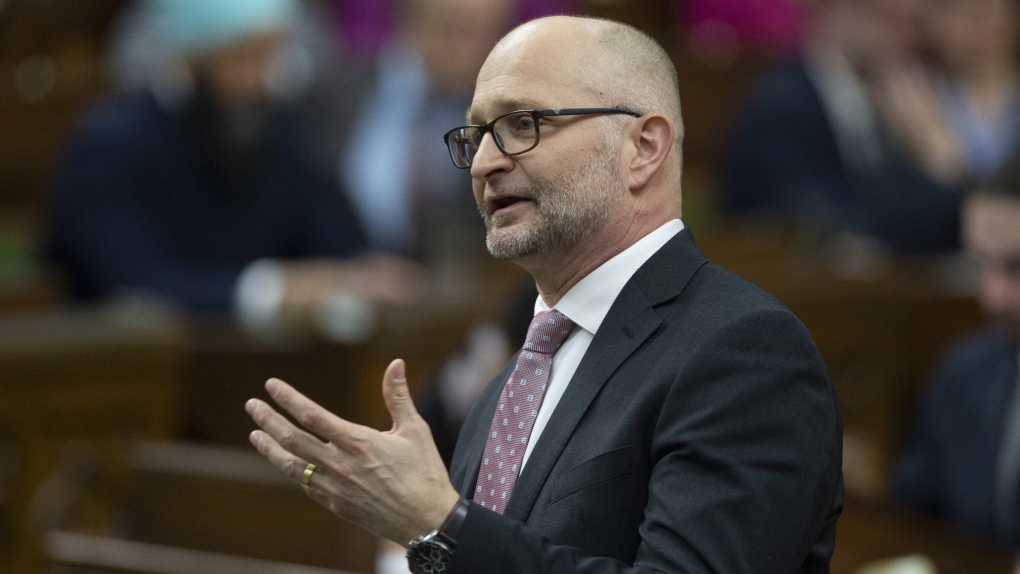 Minister of Justice and Attorney General of Canada David Lametti responds to a question during Question Period in the House of Commons Thursday April 4, 2019 in Ottawa. THE CANADIAN PRESS/Adrian Wyld

OTTAWA -- The federal government’s request to stay the Canadian Human Rights Tribunal’s order for it to compensate First Nations kids affected by a discriminatory child welfare system has been denied by the Federal Court.

The court ruled today against Ottawa’s request to eliminate the deadline to compensate affected families.

The court has also denied the respondent First Nations Child and Family Caring Society’s request to adjourn or stay the Crown's application for a judicial review of the tribunal’s decision that first ordered the compensation, meaning the compensation will go ahead.

“This is a decision saying Canada has to come back to the table.”

Canada was challenging the tribunal’s ruling ordering the federal government to pay $40,000 to every child who was improperly taken away from their parents after 2006, which would cover more than 50,000 children. The parents and grandparents whose children were taken were also to be compensated.

The Liberal government, through its lawyers, asked the Federal Court to stay the order, which imposed a Dec. 10 deadline for the government to come up with a plan on how it would provide payment to victims of the underfunding of on-reserve family services. The deadline was then moved to Jan. 29, 2020. The First Nations Caring Society called on the court to let the tribunal set up the compensation process.

“We will continue to seek a solution that will provide comprehensive, fair and equitable compensation for First Nations children in care,” said Indigenous Services Minister Mark Miller’s office in a statement. “We can accomplish this through constructive conversations with partners about how to better compensate all affected children,” the statement read.

Lawyers finalized their arguments in Federal Court on Tuesday and Justice Paul Favel said he would deliver his decision as soon as possible, according to reporting by The Canadian Press.

In the ruling issued Friday the judge found that Canada “has not satisfied the three-part test to stay the decision” of the tribunal’s compensation ruling, but that the Caring Society had also “not satisfied the Court that it should exercise its discretion to stay or adjourn” the federal government’s judicial review application.

What the ruling means, Taylor said, is that the compensation process is able to go ahead without being stalled while the government performs their judicial review of the order.

“The next step in this process in terms of compensation is going to be going back to the tribunal to figure out the process for finding the people who were discriminated against and figuring out how to get the funds that they’re entitled to them,” Taylor said on CTV’s Power Play. “At the same time we’ll be in federal court because Canada still is moving forward with this judicial review to say that the order should be quashed and that there shouldn’t be compensation paid, which of course is a contradiction to the statements earlier today from Minister Miller.”

Taylor said that it has been “almost 13 years since the complaint was filed,” and almost four years since “the decision that the discrimination had occurred came out.” Which families will receive compensation is something that will be negotiated between the Assembly of First Nations and the First Nations Child and Family Caring Society.

The Canadian Press reported previously that the Justice Department lawyer, Robert Frater, explained that the government did intend to compensate Indigenous children and families, but wanted to do so by a different process than the tribunal’s ruling.

A separate but related class-action lawsuit filed earlier this year seeks $6 billion in damages for Indigenous children, and would cover all victims going back to 1991 -- meaning it could affect more victims than the tribunal’s recent order, which only accounts for victims and families since 2006. This was the government’s argument in court, according to The Canadian Press.

Lawyers for the First Nations Child and Family Caring Society have pointed out, however, that it is possible for the government to pay the victims outlined in the tribunal’s order while also extending compensation to victims from other lawsuits.

“In the next two months, between now and Jan. 29, the three parties have to see if we can come up with a plan for how to find the victims and get compensation to them,” Taylor said. “In the meantime, the federal court process will move forward.

“The government is saying that the tribunal doesn’t have the jurisdiction to (order compensation), and we disagree, and that’s something that the federal court is going to have to decide.”