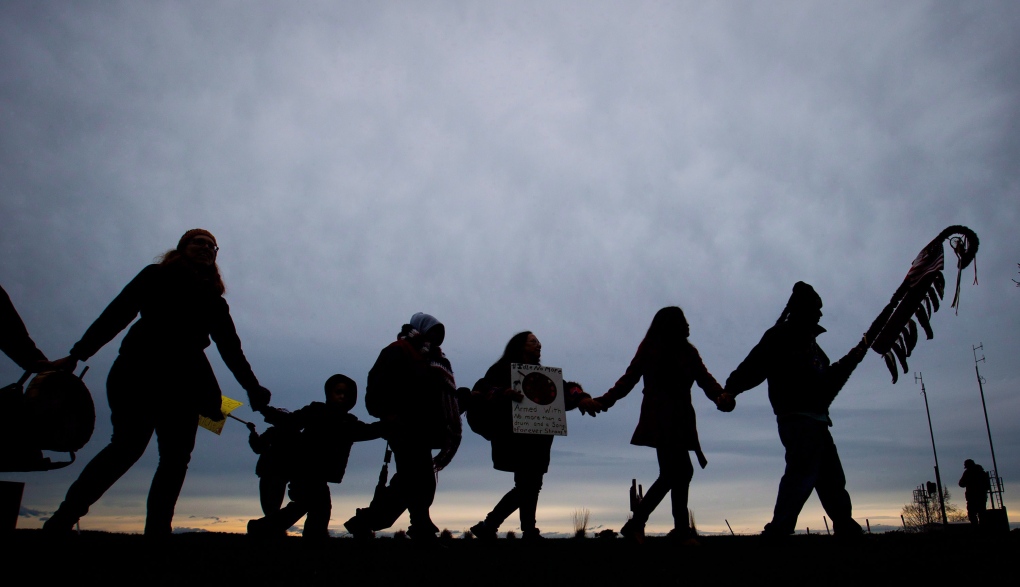 A group of First Nations protesters hold hands and dance in a circle during a demonstration in Surrey, B.C., in January 2013. (Darryl Dyck / THE CANADIAN PRESS)

OTTAWA -- "Sadly, I can confirm that the previous government removed the promised additional funding for First Nations education that it had promised, and which the previous minister confirmed in the House, in committee of the whole, that the money was still there in the fiscal framework." --Indigenous Affairs Minister Carolyn Bennett, March 11, 2016.

Bennett signalled last Friday the Liberal government is scrambling ahead of the release of the federal budget, noting that the First Nations education funding originally promised by the Conservatives is no longer available.

The education issue is extremely sensitive for the government because Prime Minister Justin Trudeau has committed to making the relationship with Canada's Aboriginal Peoples his number one priority.

How accurate is Bennett's claim that funding for First Nations education was removed by the previous government?

This one earns a rating of a little baloney -- the statement is mostly accurate but more information is required.

During the election campaign, Justin Trudeau came under fire for the math that was used to form the basis for the Liberal election promise on First Nations education.

His party promised to fund $2.6 billion for core First Nations education over the next four years -- a figure based on funding it said was promised and never delivered by the Conservatives, as well as an additional $300 million annually.

The money was tethered to a Conservative piece of legislation that proved to be controversial -- the First Nations Control of First Nations Education Act -- and was never passed.

On the campaign trail, the NDP criticized the way the Liberals financed their promise, claiming the party was looking to top up a Tory pledge that no longer existed because the attached bill was quashed.

The New Democrats also argued the Liberals based their core funding assessment on $1.7-billion, which included $500-million from an unknown source.

Trudeau defended his party's numbers during the election, suggesting the money remained available.

So was it ever up for grabs?

David Barnabe, a spokesperson in the Finance department, explained Monday the original funding was "reprofiled at a lower level" in budget 2015.

Instead of the original $1.25 billion over three years, the books now carry a total of $241 million for the same time period, Barnabe added. The money is assumed to continue flowing in the future and reach a total of $1.25 billion eventually.

"The current funding allocation for education reform increases in each year and gradually converges back to the original allocation amount by 2028-29," he said.

Rob Gillezeau, a former economist for the NDP and a current professor at the University of Victoria, said it was irresponsible for the Liberals to rely on the funds from the Conservatives.

The original $1.25 billion did not appear in last year's main estimates from Treasury Board, nor did it show up in the reports on departmental planning and priorities or the 2015 budget documents, he noted.

Daniel Lauzon, a spokesperson for Finance Minister Bill Morneau, maintained the commitments to First Nations communities were made in good faith based on publicly available information and evidence presented by the previous government.

"Though the reality is not as was advertised, our commitment to indigenous communities, including First Nations children, remains strong," Lauzon said.

The real issue is a system that doesn't enable parliamentarians to fully understand what is in the fiscal framework, according to the University of Ottawa's Sahir Khan.

Khan, who used to work inside the Office of the Parliamentary Budget Officer, noted this especially becomes a problem when parties formulate election platforms.

Don Drummond, a Queen's University economist who previously served in the Finance department and worked as the chief economist to Toronto-Dominion Bank, said there is one main point for him.

If the Liberal government wants funding to flow for First Nations education, it is going to have to significantly top up what is currently in the fiscal framework, Drummond noted.

The Conservatives would not weigh in on what happened to this funding.

Bennett's claim that the money was removed by the Conservatives is mostly accurate because the original funding pledge was significantly reduced, reprofiled and stretched over an extended period -- in a way that was not transparent or made public until now.

However, the Liberal government must now provide more information about what is on the books now they are in power, according to former parliamentary budget officer Kevin Page.

"Now they are in government, there's a budget in less than a week," he said. "These questions are coming up in the House of Commons. I think there should be clear answers."

Page said he would throw the baloney at the Finance department for not providing a clear snapshot of what is -- and what isn't -- in the fiscal framework.

People are still guessing and they shouldn't have to, he added.

No baloney - the statement is completely accurate

Full of baloney - the statement is completely inaccurate