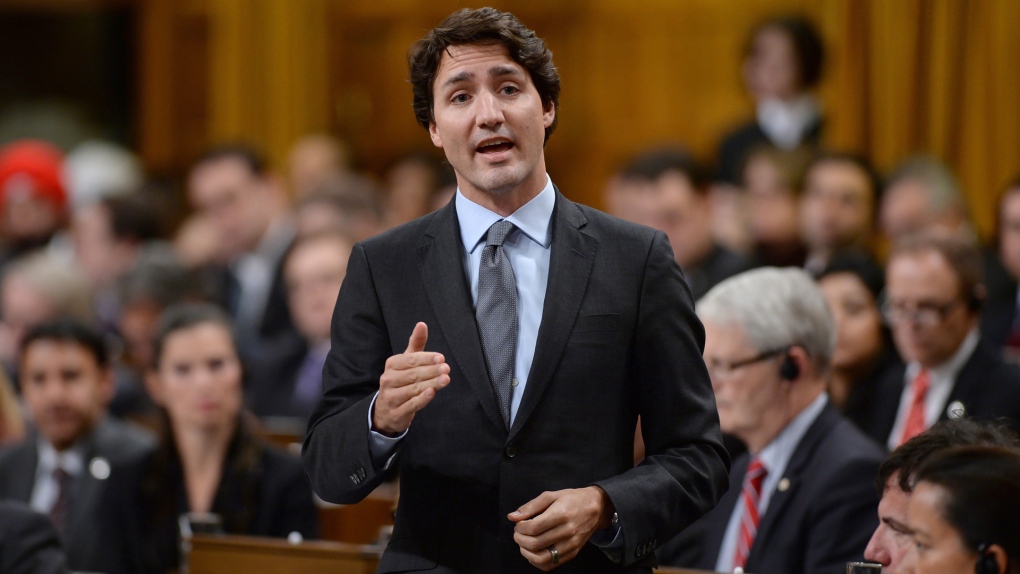 Prime Minister Justin Trudeau responds to a question during question period in the House of Commons on Parliament Hill in Ottawa on Tuesday, Feb. 2, 2016. THE CANADIAN PRESS/Sean Kilpatrick

Justin Trudeau made 214 of them during last fall's marathon election campaign, according to TrudeauMetre.ca, a non-partisan, citizen-driven website that tracks if and when the prime minister delivers on his commitments.

As his Liberal government prepares to mark its 100th day in power Friday, the website reckons Trudeau has so far delivered on 13 promises, started 29 more and broken at least two.

While some of the website's conclusions are debatable, they underscore that despite a running start, the government has made barely a dent in a sweeping platform that promised transformative change on multiple fronts: stimulating the stagnant economy, transforming government and even overhauling how governments are chosen.

A number of big promises, such as a new child care benefit and massive infrastructure investments, are expected in the Trudeau government's maiden budget late next month.

-- A more open, accessible style of governance, working with provincial and municipal leaders and striking a less adversarial tone.

-- A cabinet with as many women as men.

-- An arm's-length advisory body to recommend merit-based nominees for the Senate.

-- Withdraw Canadian fighter jets from Syria and Iraq. This week, Trudeau said the jets will be coming home by Feb. 22 while the government beefs up humanitarian aid and military support to train Iraqi ground forces.

-- Improve access to and reduce the cost of prescription drugs. The federal government has joined the provinces in a cheaper bulk-buying scheme.

-- Launch a national inquiry into missing and murdered indigenous women. The government has so far set up a consultation process to determine how best to conduct the inquiry.

-- Establish a pan-Canadian framework for combating climate change. Trudeau has met with the premiers and led a delegation to the UN climate summit in Paris to signal Canada would no longer be a "laggard" on global warming. But the government has not yet committed to a more ambitious target for cutting GHG emissions -- or a plan for achieving it.

-- Re-establish public trust in environmental assessments of resource-based projects. While it develops new rules, the government has introduced an interim process -- including new environmental hurdles and consultations with Aboriginal Peoples -- for projects that are already under regulatory review, such as the proposed Energy East pipeline.

-- Reform the operation of Parliament, including empowering backbenchers with more free votes, a weekly prime minister's question period, more open board of internal economy meetings and an end to omnibus bills.

-- Create a parliamentary oversight committee on national security operations. A chairman has been appointed -- Liberal MP David McGuinty -- but no committee as yet.

-- Clarify rules governing political activities by charitable groups to end alleged harassment by the Canada Revenue Agency. The government is winding down the political-activity audits of charities that were launched in 2012.

EXPECTED IN THE FEDERAL BUDGET

-- A new, tax-free monthly child care benefit that Liberals say will be more generous for most parents but reduced or phased out entirely for high income earners.

-- The first phase of an additional $60 billion over 10 years in infrastructure spending. The platform promised an extra $5 billion this year.

PROMISES BROKEN (or likely to be)

-- Immediately implement firearm-marking regulations to help police trace guns used in crime, postponed by the Conservatives last August. A briefing book prepared for Trudeau indicated the government had planned to meet the promise in its first 100 days.

-- Run deficits of less than $10 billion in each of the first three years of its mandate, still reducing the debt-to-GDP ratio each year and balancing the books in the final year. Trudeau has acknowledged the deficit will exceed $10 billion this year and that it will be difficult to balance in the fourth year.

-- The tax break for middle-income earners was to be revenue-neutral, paid for by hiking taxes for the wealthiest one per cent. In fact, it will cost the federal treasury $1.2 billion a year.

-- Replace Canada's first-past-the-post electoral system by the next election. An all-party committee is to examine options and recommend a replacement by mid-2017.

-- Overhaul the Access to Information Act, to make government open "by default."

-- Reduce the small business tax rate to nine per cent from 11 per cent.

-- Restore the age of eligibility for old age security and guaranteed income supplement to 65.

-- Work with the provinces to enhance Canada Pension Plan benefits.

-- Establish a new nation-to-nation relationship with First Nations, including implementing all 94 recommendations of the Truth and Reconciliation commission.

-- Negotiate with the provinces a new health accord, with a long-term agreement on funding that includes an extra $3 billion over four years for improved home care services.

-- Amend controversial anti-terrorism legislation to, among other things, ensure legal protests or advocacy can't be construed as terrorist activities and institute a sunset clause requiring review of new measures after three years.

-- Scrap the planned $44-billion purchase of 65 F-35 stealth fighter jets, launch an open and competitive bidding process, reallocating the savings to the navy.