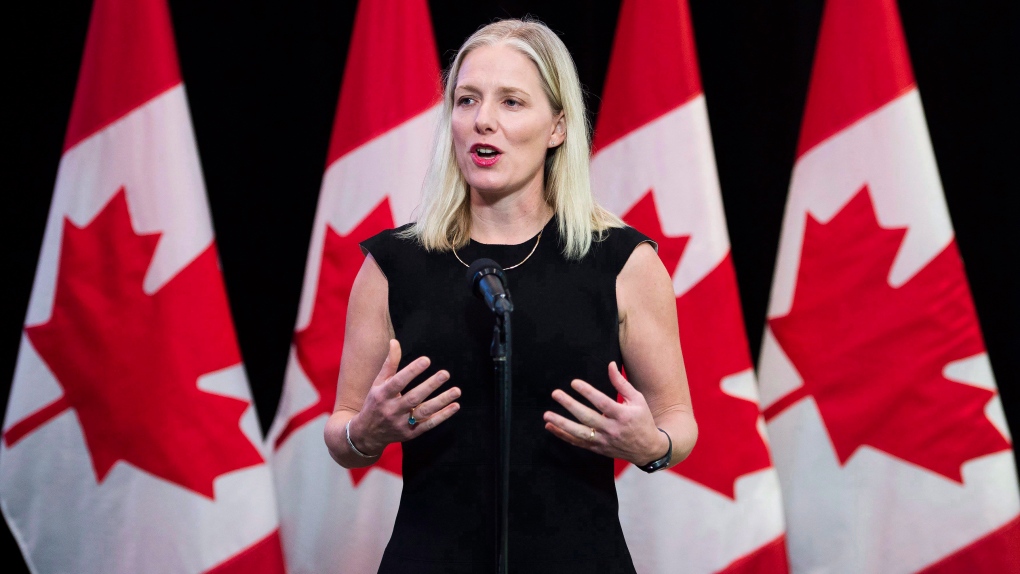 Minister of Environment and Climate Change Catherine McKenna speaks to the media before the Liberal cabinet retreat in London, Ont., on Friday, January 12, 2018. (THE CANADIAN PRESS/Nathan Denette)

OTTAWA -- Canada plans to use its presidency of the G7 this year to push fellow member countries to help stop the oceans from becoming massive rubbish heaps.

At the World Economic Forum in Davos, Switzerland, Trudeau hosted a roundtable discussion Wednesday on ocean protection with academics, political representatives and executives from multinationals including Coca-Cola and Unilever.

He told the assembled group Canada is using its G7 year to bring forward issues that don't always get a lot of attention at the highest levels of international governance, including ocean protection, "particularly around plastics and pollution."

In an interview later, Environment Minister Catherine McKenna said that could include creating a "plastics charter or a zero waste goal."

The problem is no fairy tale message in a single bottle floating across the sea.

It's estimated as much as eight million tonnes of plastic ends up in the world's oceans each year. That's the equivalent of approximately 630 billion single-use plastic water bottles.

"The health of the oceans is under threat," said McKenna, who was in Miami for meetings with local political leaders, academics and university students on climate change and clean technology.

The plastics issue will be a main theme at the G7 leaders' summit in Charlevoix, Que., in June, with follow-up planned for a G7 environment ministers' meeting next fall, said McKenna.

Last fall, Canada signed on to the United Nations Clean Seas campaign, which was launched in February 2017 to draw public attention to the massive amounts of garbage that are ending up in the world's oceans.

Despite a rise in both recycling and composting in Canadian cities and towns, Canadians are still among the most wasteful people in the developed world, with 25 million tonnes of waste ending up in landfills in 2014. Garbage produced by households went up 18 per cent between 2002 and 2014.

Jay Ritchlin, the Suzuki Foundations' director general for western Canada, said Canada's role in the total amount of ocean garbage is small but its leadership could loom large. However, he said the only thing that is going to have an impact is the "complete elimination of disposable plastic products."

"You have to find ways to reduce the consumption whether by banning them outright or taxing them or creating incentives," he said.

"But we're not going to tweak the edges of our manufacturing system and fix this problem. There is so much plastic out there ... that this problem doesn't go away without getting rid of a substantial portion of that material."

McKenna said Canada's efforts will build on existing work by international organizations and multinational corporations. A number of companies, including Coca-Cola, Pepsi, McDonalds, Unilever and Procter and Gamble, have pledged in recent weeks and months to increase the amount of recycled material in their packaging and work on recycling the equivalent of everything they produce.

In 2016, a report launched at the World Economic Forum claimed if nothing was done by 2050 there would be more plastic in the oceans than fish. It's a claim some have questioned because of the difficulty in accurately counting either plastic or fish. But even those who cast doubt on the comparison admit there is too much junk in the ocean and it is having a negative impact.

Plastic bags and bottles pose a deadly threat to marine life, trapping them so they drown, cutting them, or even being mistaken for food.

Canada has committed as much as $2 billion to ocean protection, including increasing the amount of protected marine areas. Ritchlin said the Trudeau government is doing better than previous administrations but the question now is whether they will follow through with the commitments.