OTTAWA -- Maxime Bernier, the long-time Conservative MP with an equally long history of creating headaches for leaders of the current official opposition, is quitting the party to start his own libertarian version.

The rogue MP for Beauce, Que. announced Thursday that he's leaving the Conservative Party of Canada after weeks of disputes with his colleagues over immigration and supply management, Canada's price-support system for dairy and poultry farmers.

Bernier says the party has "all but abandoned its core conservative principles" and harshly criticized it for bowing to polls and focus groups in order to set policy.

"I am in politics to defend ideas - real conservative ideas - because I passionately care about the future of our country," Bernier told reporters in Ottawa, adding that he isn't convinced that party leader Andrew Scheer wouldn't be a "more moderate" version of Prime Minister Justin Trudeau were he to win next year's federal election.

"I've come to realize this party is too intellectually and morally corrupt to be reformed," he said.

Bernier says he wants to create a new party and is going to travel the country consulting conservatives. He says he hasn't spoken recently to any of his former caucus colleagues, and that he last had a conversation with Scheer more than a week ago. It was after that conversation that he decided to start the new party, Bernier said.

"My leader told me and every other Canadian that I don't have any influence in the party," he said, referring to Scheer's statement that Bernier didn't speak for the Conservatives. Scheer released the statement after days of controversy over Bernier saying "more diversity" would destroy Canada, and after several Conservative MPs spoke out against Bernier.

Bernier will keep his seat in the House of Commons, and said he plans to run in the next election. He says he isn't stepping down and will let voters in his riding decide whether they want an independent MP because it's not him who changed.

"It's the party who changed. I didn't change. I'm the same guy. I believe in the same ideas," he said.

He dropped the bombshell announcement in Ottawa just hours before his former colleagues were to meet in Halifax for the party's biennial policy convention.

"He has traded an opportunity to influence policy in government for his own personal ambition," Scheer said in Halifax, referring to next year's federal election.

The Conservatives, Scheer said, are best-placed to beat the Liberals in 2019 and by working against the party, Bernier "has decided to help Justin Trudeau."

Relations between Bernier and his now-former caucus colleagues have been increasingly -- and publicly -- tense in the past few weeks as the Quebec MP refused to back down from controversial tweets about immigration and what he called Trudeau's "extreme multiculturalism."

On Wednesday, Conservative immigration critic Michelle Rempel told reporters that Bernier had to pick a side: Scheer or Trudeau. Her remarks came after Bernier lashed out at her for holding a news conference about immigration policy.

"So, after disavowing me last week for raising the issue and telling me to shut up, my colleagues have just realized that this is something Canadians find important and want to hear about? Great example of strong leadership!" Bernier wrote on Twitter. 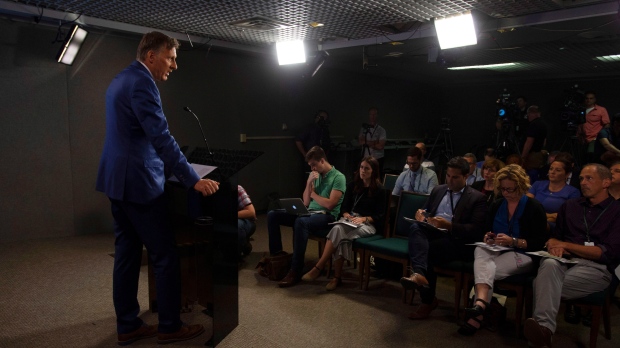 Last week, Scheer distanced himself from Bernier's views, although he didn't kick him out of caucus. Scheer had already revoked his former leadership rival's critic portfolio after Bernier posted a chapter from his upcoming book that challenged the party's official position on supply management.

The book is postponed indefinitely after the excerpt created controversy for Bernier's assertion that Scheer pandered to the dairy farmers who benefit from Canada's supply-managed system in order to win the party's leadership. Bernier came second to Scheer in a 51-49 per cent split.

The dapper politician, whose father also served as the riding's MP, was first elected in 2006 and almost immediately was named industry minister before moving a year and a half later to the high-profile foreign affairs role.

But Bernier was forced to resign from that post in 2008 after leaving classified documents in the home of his ex-girlfriend, who had ties to Quebec biker gangs.

Then-prime minister Stephen Harper had defended Bernier in the weeks leading up to the revelation. He said he accepted Bernier's resignation only because of the security breach with the documents.

Bernier was relegated to the back bench until 2011, when Harper gave him a minor role as minister of state for small business and tourism, which he held until the Conservatives lost the 2015 election.

Long-time Conservative Kory Teneycke, who was Bernier's leadership campaign adviser and director of communications to Stephen Harper, said he doesn't sense much of a movement behind Bernier. 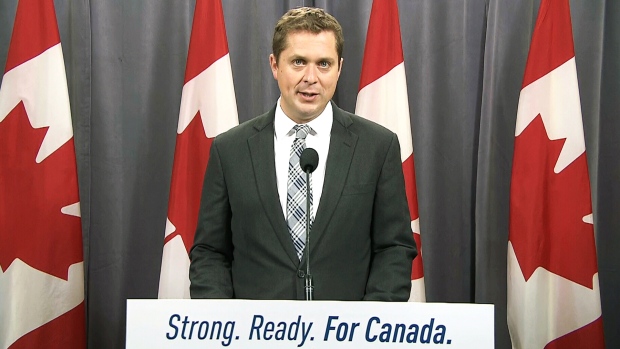 "There's always been I guess an achilles heel for Max when it comes to judgement and there's always been a bit of an undertone of narcissism in some of the things he's done in the past, and I think this smacks of both of those things," he said.

Party members and MPs expressed anger at Bernier, who had far less caucus support in last year's leadership race than Scheer and Conservative MP Erin O'Toole, who came third. Despite that, Bernier drew the support of nearly half of all party members through the run-off vote.

They also expressed frustration he would split the right in Canada. Even Harper, who was a key figure in uniting the former federal Progressive Conservatives and Canadian Alliance, weighed in on social media.

"It is clear that Max never accepted the result of the leadership vote and seeks only to divide Conservatives. His decision today allows the Conservative Party of Canada to move forward united behind our Leader @AndrewScheer," the former prime minister said.

British Columbia MP Todd Doherty said Bernier had privately assured him he was committed to the Conservative team.

"You had every opportunity to stand in caucus to share your views and provide input," Doherty wrote on Twitter.

"When given the opportunity - you stayed silent or blamed it on others around you. You're Twitter Tough... all bark no bite. #shameful"

"I don't think he's ever gotten over the leadership race. And him and his minions need to get on side or, you know, get out of the way."

Many Conservatives cast doubt on Bernier's sincerity given his long history in the party and past as a cabinet minister. As a former industry minister, for example, he was responsible for several of the programs which he now rails against.

Rachel Curran, who served as Stephen Harper's policy director when he was prime minister, suggested the federal Liberals should be celebrating.

"I hope Justin Trudeau and his cabinet colleagues are breaking out the champagne in Nanaimo this morning. Congratulations to [Trudeau's principle secretary Gerry Butts] @gmbutts & co. who have secured an easy win in 2019 despite a mostly terrible summer," she said on Twitter.

Steven Dollansky, a former candidate and a national councillor for the party, said the party's members have set its policy the same way since it was founded in 2003.

"Today we're kicking off the largest convention in our Party's history. This stunt isn't about policy or principles, if it were Max would be here ... debating. This is about one man's ego," he said on Twitter.

It is clear that Max never accepted the result of the leadership vote and seeks only to divide Conservatives. His decision today allows the Conservative Party of Canada to move forward united behind our Leader @AndrewScheer.

@MaximeBernier you had every opportunity to stand in caucus to share your views and provide input.
When given the opportunity - you stayed silent or blamed it on others around you.
You’re Twitter Tough... all bark no bite. #shameful

I hope Justin Trudeau and his cabinet colleagues are breaking out the champagne in Nanaimo this morning. Congratulations to @gmbutts & co. who have secured an easy win in 2019 despite a mostly terrible summer.

Think you can do better? How to start your own political party

'He kind of ripped off the Band-Aid:' some Tories relieved after Bernier quits

Doug Ford urges federal Conservatives to 'stand with your leader'