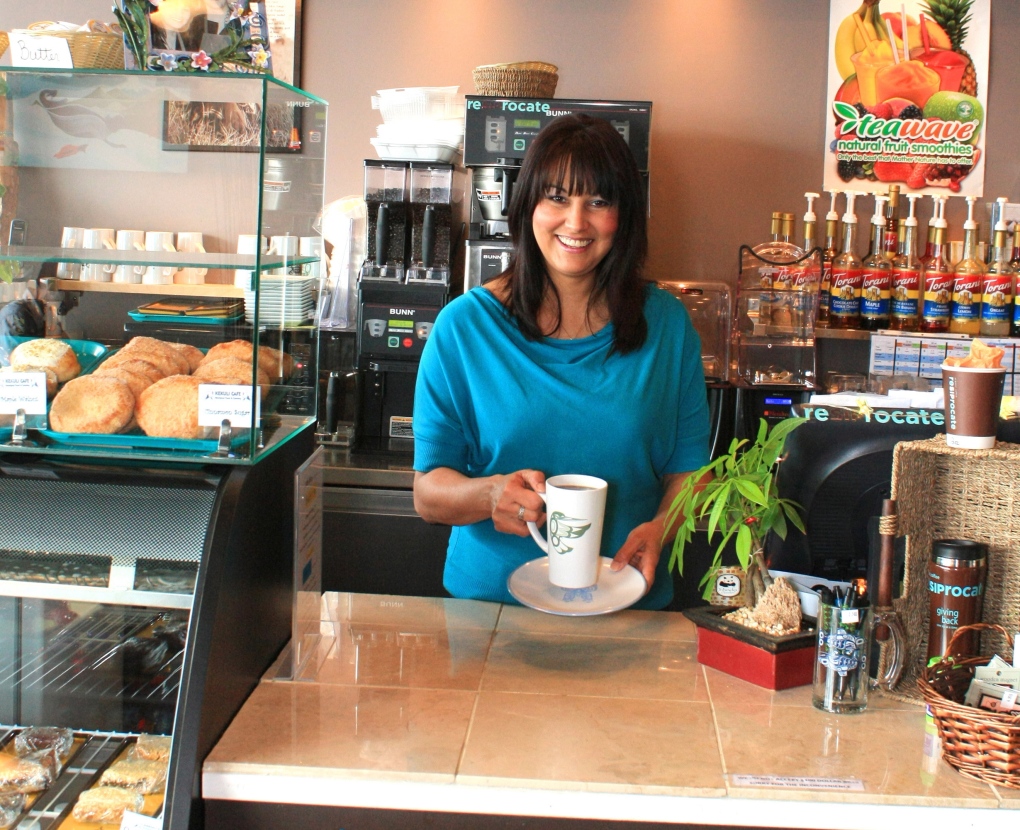 In 2009, Sharon Bond and her husband started the Kekuli Cafe in Westbank, B.C. (THE CANADIAN PRESS/HO, Kekuli Cafe)

LONDON, Ont. -- Many family favourites on Thanksgiving dinner tables across Canada trace their origins to food made by First Nations peoples long before Europeans set foot in North America.

Besides fish and game such as buffalo, elk and caribou, native feasts held centuries ago at various times of year would have included roasted fowl such as pheasant, grouse and turkey, root vegetables such as turnips, potatoes and carrots, the "three sisters" of corn, beans and squash (including pumpkin), nuts and berries. In some locales, wild rice and cranberries might have been served, and on the coasts and in the far north seafood would have been a staple.

These foods were indigenous to the country, says chef David Wolfman, a culinary arts professor at George Brown College in Toronto for 20 years and executive producer and host of "Cooking with the Wolfman" on APTN for 15 years. Some may have been unfamiliar to European explorers and settlers but were all adopted of necessity.

As they were passed from generation to generation, they became "traditional," he says, explaining this sharing of knowledge and foods is very much in the spirit of First Nations culture.

He is a member of the Xaxli'p First Nation in British Columbia, but "I grew up as an urban native (in Toronto) so I had to learn my culture." He remembers as a boy trying to take notes as an elder shared stories and being admonished by an aunt to put the pencil and paper away. "You should be listening," she said.

"Later on I realized (what she meant was) that the stories shared with you are given to you to share. They're not given to you to keep. That was one of the things that really stuck in my head. So a recipe I give you, it's not a secret recipe. It's to share. You're going to take it and add your own things to it and share it with other people and so on. It stays alive that way."

Of course, the recipes and cooking methods have changed.

"They would dig out pits in the ground and smoulder rocks over the fire. Then they would put some type of green leaves over top and just keep layering it with food. Whatever took the longest to cook went on the bottom, so there would be a lot of stuff like deer and salmon. Root vegetables and potatoes would be closer to the top. It would be an all-day cooking process," she says and if many people were to be fed, the pit could be huge.

This obviously isn't practical for the two locations of the Kekuli Cafe she and her husband own in B.C. But her menu is definitely based on aboriginal traditions, she says.

Her specialty is bannock, a flat or biscuit-type of bread and a staple of aboriginal cuisine that can be baked or cooked in a frying pan. There's some suggestion it was adapted from Scottish settlers. It's featured in breakfast fare, as bannock burgers and sandwiches and she even offers a berry-bannock pudding for dessert.

When she opened her first cafe in Westbank in 2009, "It was kind of scary," she says. She knew of only one other aboriginal restaurant, a high-end spot in Vancouver that has closed, although a few more have opened since.

"I didn't know what to tell people when they asked, 'What kind of food do you serve?' 'Well, we serve First Nations food.' 'Well, what is that?'

"The bannock was a theme. We had salmon, venison, buffalo, the classics, burgers and fries. We make all our own sauces and vinaigrettes so we really try to have an aboriginal twist to our foods."

Her success with both natives and non-natives allowed her to open a second location in Merritt in August.

Wolfman sees a huge resurgence of interest in aboriginal food reflected in the "eat local" and "100-mile diet" movements. Historically, natives may have had no choice, but now large numbers of Canadians see the wisdom, both economically and in terms of taste and freshness, of eating only locally grown and produced food, he says.

While there may not be a proliferation of restaurants with exclusively aboriginal-themed menus, more and more high-end establishments are introducing dishes featuring typically aboriginal ingredients. "They're serving bison, arctic char, those sort of things. The more people are aware of foods, the greater the demand will become."

For the man who calls his cooking "aboriginal fusion: traditional foods with a modern twist," it's fine if those dishes are updated.

"What I do is respecting and understanding traditional foods but serving them in a modern way."

Bond says that on a cross-country car trip with her husband in September, "I was thinking, 'what is Canadian food?' Everything that is Canadian is so simplistic, simple foods from the land, like the blueberries, the maple syrup from the trees, salmon from the river. It's that home-style comfort Canadians know."

That's a lot to be thankful for.

The first European Thanksgiving celebration in North America took place in Newfoundland when English explorer Martin Frobisher landed there in 1578 in his quest for the Northwest Passage. He wanted to give thanks for his safe arrival in the New World. This was 42 years before the Pilgrims landed in what is now Plymouth, Mass.