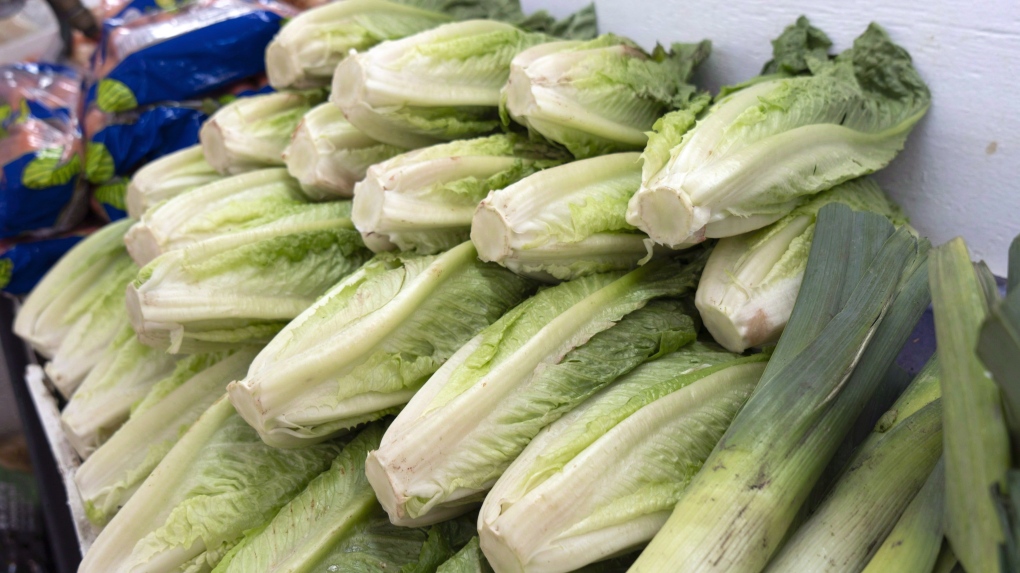 Romaine lettuce is seen at market in Montreal on Thursday, Nov. 22, 2018. (THE CANADIAN PRESS/Paul Chiasson)

VANCOUVER -- A string of high-profile produce recalls may lead to shortages of the most recent culprits ahead of the holidays. But, even if cauliflower and some lettuce varieties stay in stock, experts say consumers may be hesitant to buy and serve them as part of a big, family meal.

The Canadian Food Inspection Agency announced over the weekend a recall of certain cauliflower and lettuce products produced by California-based Adam Bros. Farming Inc. that were distributed in at least six provinces. There have been no reported illnesses associated with the wrapped cauliflower, and green leaf and red leaf lettuce that's sold in bulk without a brand name.

"We are likely -- in the short run at least -- to be short of those products," said Mike von Massow, an associate professor at the University of Guelph.

In the winter, Canada's supply of fresh fruit and vegetables tends to come from very specific areas, he said. The farm in question likely represents a significant proportion of the total cauliflower and leafy greens arriving in Canada and stopping those imports could create a strain on supply, resulting in higher prices for what is safe and available ahead of the holidays.

Metro Inc.'s Ontario and Quebec distribution centres did not receive product from that farm, wrote spokeswoman Saide Weinstein in an email.

Neither company anticipates a shortage.

Loblaw Companies Ltd. did not immediately respond to a request for comment.

Romaine lettuce, on the other hand, seems to be back in stock in at least some grocers' stores after a recent recall that prompted many companies to temporarily stop selling the product.

Empire, the parent company of Sobeys, has now sourced romaine from an unaffected region and the product is back in stock, an executive said during a conference call with analysts last week. Metro has also restocked romaine after sourcing it from Arizona, wrote Weinstein.

There are alternatives for each of these items, of course, like swapping brussels sprouts for cauliflower.

However, folks tend to be highly traditional over the holidays and some dishes may demand specific ingredients.

"I think about our Christmas traditions and we have very sort of established meals over the holidays," said von Massow.

"And so, that could put a crimp if cauliflower is central to that for families."

They may have to pay more than they otherwise would for that ingredient, he said.

A more budget-minded option may be purchasing frozen cauliflower, said Simon Somogyi, a professor at the University of Guelph who studies food consumer behaviour.

It's possible though, consumers may simply avoid these products and others implicated in recent recalls.

This recall comes shortly after a wide-ranging romaine lettuce recall in the country and south of the border. The Canadian Food Inspection Agency halted romaine lettuce imports from certain California counties after the leafy green was linked to 28 cases of E. coli in the country. Grocery stores pulled romaine lettuce off their shelves and many restaurants stopped serving dishes with the ingredient at the time.

"I think we're definitely in a period of recall fatigue and there seems to be so many recalls of late that consumers are getting just confused and that's a concern," Somogyi said.

Canadians should be comforted by the fact that authorities have pinpointed the location of the most recent outbreak of cauliflower and leaf lettuce, he said.

But he wouldn't be surprised if they're cutting back on romaine consumption as a U.S.-Canadian investigation has yet to determine the source contamination for that outbreak.

Some have speculated that a deadly 2006 E. coli outbreak linked to spinach, for example, prompted consumers to favour kale instead.

People may also be more vigilant about what they serve others over the holidays as they tend to be bigger meals than usual, said von Massow.

"You also don't want to be the person that served the entire family of 18 the vegetable that made them sick."