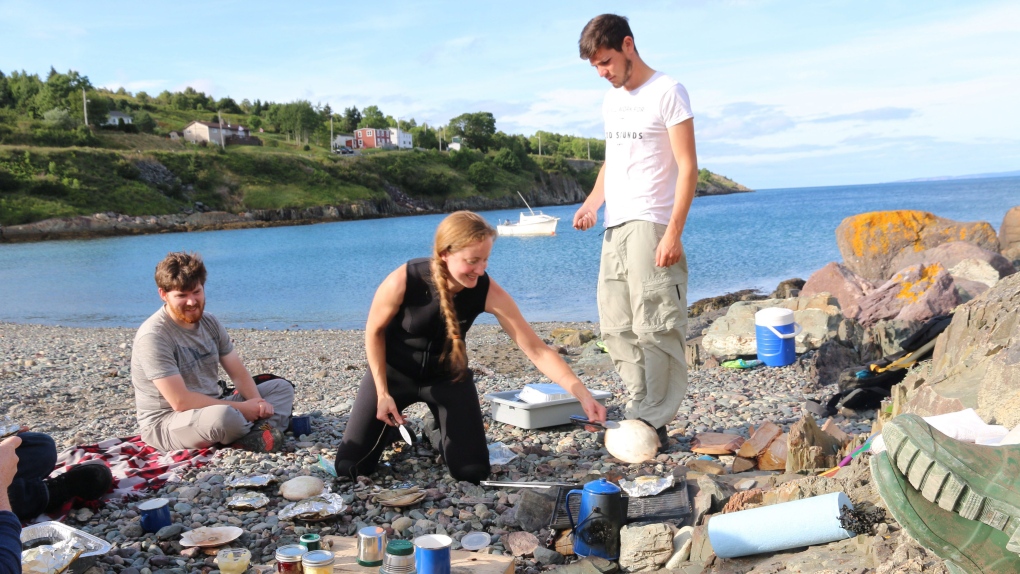 Lori McCarthy of Cod Sounds, a culinary adventure company, serves up a meal of fresh mussels, cod and scallops garnished with wild herbs and blueberries near Avondale, N.L., on Sunday, Aug. 21, 2016. (Mike Wert /THE CANADIAN PRESS)

AVONDALE, N.L. -- There's a saying inspired by the boil-up, a tradition of outdoor eating that's especially loved on the island of Newfoundland: Nothing tastes as good as a cup of tea in the woods.

And it's true -- unless the tea is served while you bask in sun on a beach near Avondale, N.L., as thinly sliced scallops sizzle on a heated rock slathered with butter and garnished with vibrant blue oyster plant leaves.

Mussels just plucked along the cool shallows of the North Atlantic simmer in seawater on the fire, and there's fresh cod steamed with lovage -- a wild herb with hints of parsley -- newly picked blueberries and home-baked bread to complete an extraordinary meal.

Owner and operator Lori McCarthy, whose favourite childhood memories include many beach boil-ups with family, calls it a culinary adventure company.

"It's about introducing people to a very old way of life here," she said, still wearing the wetsuit she donned to snorkel just offshore, collecting the freshest mussels, sea urchins and periwinkle snails for her guests.

"You picked a lot of your own food or you fished, came to the beach with your family and cooked up."

There's just something about gathering around a fire and eating in the open air, McCarthy said.

"It's getting back to elemental cooking. You're uninterrupted by the rest of everyday life. You're just enjoying the moment and where you are in it."

McCarthy is also reviving old customs increasingly lost in a rushed world of processed meals and microwave dinners. A cod sound is a buoyancy air bladder that was cut out of the fish before salting for export but saved by fishermen as a meaty bit of vital sustenance.

Forage and meal tours offer a unique taste of bygone days that draw guests from across Canada, the U.S., Europe and Japan, McCarthy said.

Trips begin in Avondale, about a 45-minute drive southwest of the capital St. John's. We headed to a nearby shoreline where McCarthy handed out small paper bags to fill with snippets of plants that grow among the rocks and in bushes not far from the water.

There is sea rocket with a kick like horseradish that can spice up aioli, fish or greens. Scotch lovage, which we ate later with cod baked in olive oil infused with locally made seasoning salt, is much like parsley or celery. Oyster plant, its green-blue leaves a burst of colour among the beach stones, really does taste a bit like oyster.

McCarthy cautions new foragers to do their homework before picking, and to be aware of potential contaminants.

"For me, it's about finding things that I can substitute, that I don't have to buy in the supermarket," she said.

"If I can get it on the plates in restaurants it just allows people that travel here, and people from here, to see the products we have."

After about an hour of picking, it's a short drive to another beach where a fire is lit and supper prepared.

For Jenny Harnett, a Newfoundlander who now lives in Perth, Australia, sharing a meal with McCarthy was a revelation.

"You have no idea what's in your own backyard. There are so many amazing flavours and tastes," she said.

"And it's just right there."