TORONTO -- Included on a long list of things that changed for many in 2020 was the shift from eating out in restaurants to ordering in, fuelling a surge in demand on third-party delivery apps that pair a roving driver with a meal ready to be dispatched to a customer’s home.

More Canadians stayed home and used platforms such as Skip the Dishes, Uber Eats and DoorDash to find restaurants and order in meals in 2020, but the question remains whether that will continue in the long-term when COVID-19 is eventually in the rear-view mirror.

This year of lockdowns, pandemic restrictions on restaurant capacity and reluctance among many diners to frequent indoor public places, would seem to offer a turning point for delivery services that have struggled to make profits.

2020 has seen rapidly accelerated adoption of a range of online ordering of groceries and prepared food in Canada, but experts say long-term profitability will require a major shift in business models.

According to the Agri-Food Analytics Lab (AAL) at Dalhousie University, Canadians ordered $4.7 billion worth of meals in 2019, and close to $1.5 billion of that was ordered by using a food delivery app.

A report published in February found 39 per cent of Canadians had tried a food delivery app at least once, up from 29 per cent in May 2019.

GETTING BETTER AT ONLINE

But 2020 was the year that food delivery really came into its own.

Altogether, 63.8 per cent of Canadians ordered food online in some way in the last six months, according to recent AAL research.

Its survey of almost 7,300 Canadians in early November found that nearly 29 per cent had ordered directly from a restaurant in the last six months and a little more than 26 per cent had used a delivery app. Almost a third had used curbside pickup or home delivery for groceries.

“We estimate that over the last six months, 4.2 million more Canadians are ordering food online at least once a week than before the pandemic,” reads the report.

Canadians are ordering food more frequently, too. Before the pandemic, 29.6 per cent reported ordering food online once a week. That proportion soared to 45.4 per cent since March.

And 49.4 per cent said they intend to keep ordering online at least once a week after the pandemic is over.

“That was much higher than we were expecting,” Sylvain Charlebois, director of the AAL, told CTVNews.ca in an interview. “Whether that changes with a vaccine, we don’t know. But we do know the food industry is getting better at the online experience.”

Charlebois says he ordered groceries ­– 55 items for his family of six – at 10 a.m. on a rainy Sunday in December and the bags were at his doorstep at 11:34 a.m.

Charlebois went to the store later and tallied his order. He calculated that he paid a seven per cent premium for delivery, before the tip to the shopper.

But many Canadians – a full 37.2 per cent, according to the AAL – have not purchased food online in any way during the pandemic. Broken down by age, that includes 57 of baby boomers and 29 per cent of millennials.

ORDERING IN – THREE TIMES A DAY

Delivery and service fees are a barrier for many, with 45.7 per cent of Canadians unwilling to pay any fee, according to AAL research. Just over 32 per cent said they are willing to pay a fee of up to 5 per cent.

Other cons of online ordering: not being able to see the food before purchase (17.9 per cent); concerns about food quality (14.6 per cent); unconfirmed product substitutions (9.2 per cent); not liking other people touching their food (8.6 per cent).

But Charlebois says the Canadian food industry has committed to investing more than $12 billion to online platforms, and convincing Canadians to make the shift, in the next five years.

Some need no encouragement to embrace restaurant-to-door delivery.

According to Skip the Dishes, which was founded in Saskatoon in 2012, its top customer was someone in Edmonton who ordered in 962 times between Jan. 1 and Nov. 4, (just edging out someone in Manitoba who got food delivered 958 times.)

To put that in perspective, that works out to 3.1 times a day and, if the same rate is maintained for the rest of the year, puts the eater on track to top 1,135 orders for 2020.

The devastating impacts of COVID-19 on the restaurant industry have led a number of provinces to relax long-standing alcohol regulations, allowing, for the first time, the delivery of alcohol with takeout meals. Ontario and Newfoundland and Labrador are among the jurisdictions that have already said the measures introduced to shore up struggling restaurants will be permanent.

Skip the Dishes and Ontario’s LCBO announced a partnership Dec. 4 to allow direct ordering and delivery of alcohol through the app, but just two days later, the Ontario government announced it had directed the provincially owned agency to suspend the deal in support of the restaurants relying on alcohol sales to partially buffer losses.

While delivery apps have been a fixture of the restaurant landscape this year, they are costly, taking roughly 30 per cent of an order’s total. Restaurateurs have complained about the erosion of already thin margins, at a time when almost half independent operators expect to close within six months if conditions don’t improve. Eight out of 10 restaurants said they are either losing money or just breaking even, according to a survey by Restaurants Canada released Dec. 8.

A third of respondents complained about costs, while 44 per cent said quality or service control was a negative factor.

So far, none of the prominent delivery platforms are profitable, says Charlebois.

Foodora filed for bankruptcy in Canada in April, leaving the market a month later. The Canada-founded Skip the Dishes, which was acquired by England’s Just Eat in 2016 in a deal worth up to CAD$200 million, pulled out of the U.S. market in March 2019.

Neither Skip the Dishes nor DoorDash would share total national order numbers or make someone available for an interview. An Uber Eats spokesperson said the company wouldn’t be able to provide data until the end of December.

Charlebois isn’t surprised about the reluctance.

“The food business is such a high-volume, low-margin sector that everyone is super secretive about their data.”

Still, there are signs investors are optimistic about the future of delivery in the gig economy.

DoorDash Inc. went public on the New York Stock Exchange Dec. 9, setting a price of US$102 a share. By end of day trading, share prices settled at US$189.51, giving the company a market capitalization of US$60 billion.

According to company filings, it has 50 per cent of U.S. market share as of October. The company, founded as a side hustle by three Stanford University friends in 2013, says there is growth opportunity because less than 6 per cent of U.S. residents use its service.

But some analysts questioned the share price, arguing that when the pandemic threat recedes, consumers will flock back out to restaurants.

“Clearly there are people who believe it will make money, but the jury is still out,” said Charlebois.

The company acknowledged that growth rates achieved during the pandemic may not continue into the future and that it expects costs to increase and losses to continue.

The value offered by online ordering and delivery platforms used to only be about the convenience of delivery and the ability to peruse a wide variety of restaurants all in one place, says Michael von Massow, a professor in Food, Agriculture and Resource Economics at the University of Guelph.

The pandemic has shifted the priorities to safety and compliance with stay-at-home recommendations, while supporting local restaurants.

But the business model for delivery apps hasn’t worked and COVID may accelerate the shift to fixing it, says von Massow. He thinks the only way forward is to build more flexibility in for both users and restaurants.

A big issue, especially before the pandemic, has been that the food delivery apps bring in business when many kitchens are already busy. That can result in a poorer experience for customers in the restaurant, so some owners or managers choose to shut down to online ordering rather than risk higher-margin eat-in business.

Von Massow says the restaurant landscape will become more diversified after the pandemic. At one end of the spectrum are the eateries that specialize in the experience of eating out. At the other end are so-called “ghost kitchens” that just serve the takeout and delivery market.

The cost models are completely different and the ways delivery apps serve them needs to be, too, he says.

“Uber Eats and Skip the Dishes and others have to rethink the offerings they have in the marketplace and not enforce a one-size-fits-all onto all restaurants.”

Ontario has capped delivery app fees to a maximum of 20 per cent in areas where pandemic lockdowns are in place, joining U.S. cities including New York City, Seattle and Los Angeles.

The regulation is intended to shore up independents and small chain operators during the crisis but it digs into the already-low earnings of drivers and cuts into the viability of the platforms, says von Massow.

“That could lead apps to drop non-profitable markets or restaurants. Instead, the long-term answer is flexibility in the revenue model.”

WHO’S ORDERING AND WHAT ARE THEY EATING?

Skip the Dishes Canada says users 65 and older were its fastest-growing segment of new users, late-night orders were up 38 per cent and 81 per cent of customers have ordered from a restaurant in 2020 they’ve never been to in person.

Other data from Skip the Dishes: its most expensive order also came from Edmonton at $900.27, with an order that included three bottles of Dom Perignon Champagne. 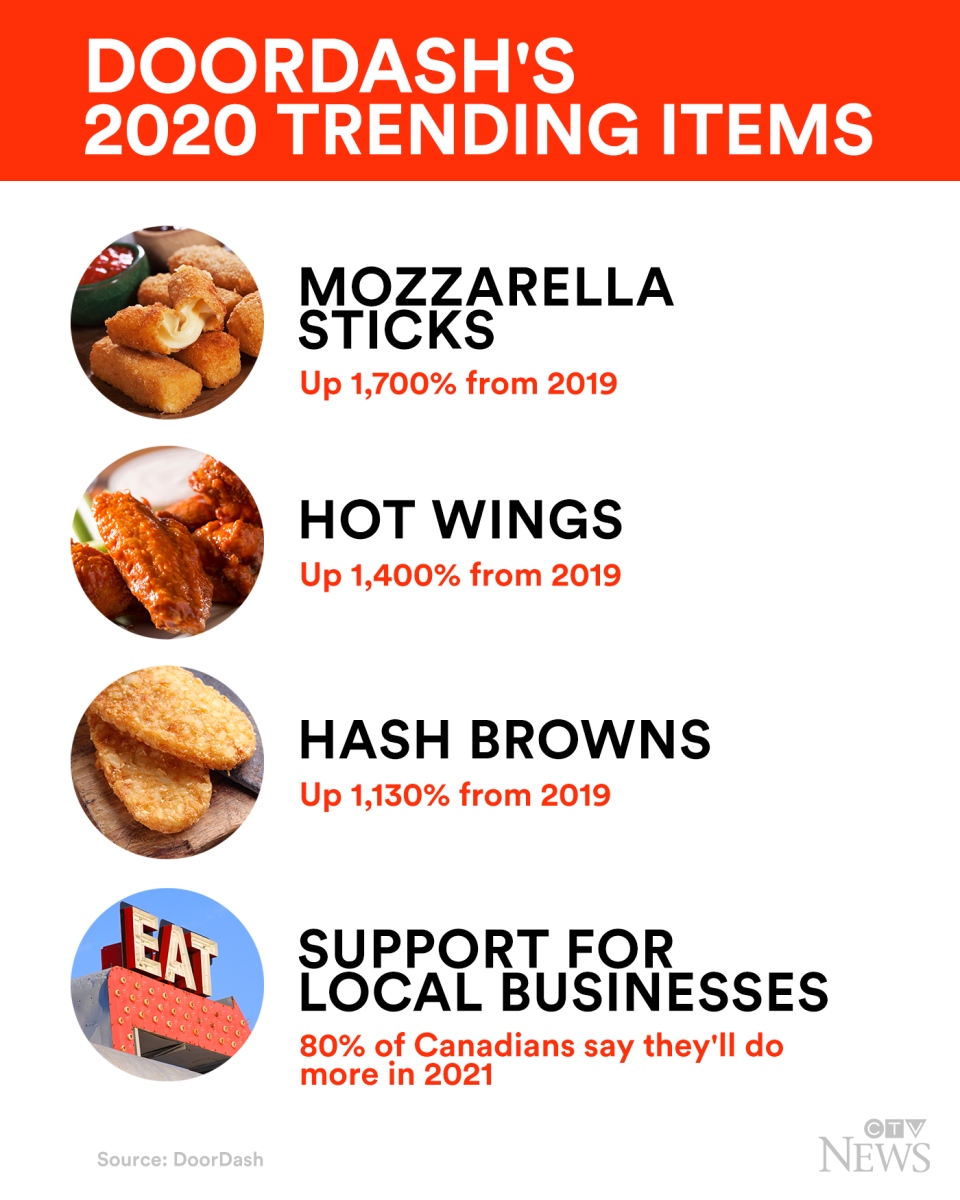 Trending foods were hot wings, up 1,400 per cent over 2019, mozzarella sticks, up 1,700 per cent and hash browns, up 1,130 per cent. Other hot items were quesadillas, molten chocolate cake, onion rings, nachos, gyoza, apple pie and dynamite sushi rolls.

Top foods varied widely across the country. In fact, no two provinces picked the same winner.

In B.C. it was burritos, Alberta went with onion rings, and Saskatchewan chose healthy with chicken lettuce wraps. Ontario ordered a lot of butter chicken and in Quebec it was – no surprise – poutine. Nova Scotians love chicken shawarma, while in PEI, pad Thai is No. 1.

New Normal: Tropical vacations are safe and enjoyable but not an escape from the pandemic

New Normal: 15 ways cities can emerge better than ever after COVID-19

Small talk is out, old-fashioned courting is in: The pandemic has shifted the dating game

Is the great shift to working from home here to stay?

New Normal: Taped-off desks could be the future of the office space

New Normal: Rear-facing seats could be the future of air travel

New Normal: Will COVID-19 mark the death of the handshake?