Minecraft: Why are kids, and educators, so crazy for it? 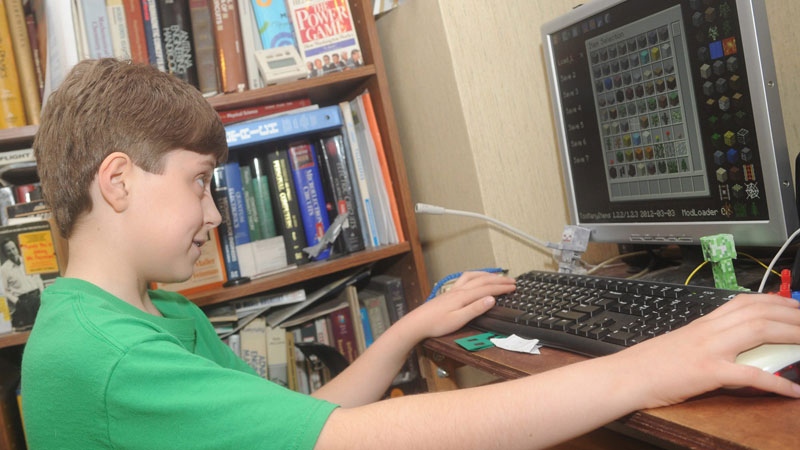 Fifth-grader Andrew Riachi, 11, looks through his inventory while playing a game of Minecraft on a computer he built himself. (The Joplin Globe / Roger Nomer)

In a mere three years, a simple little game called Minecraft has grown to become the third most popular computer game of all time (after Tetris and Wii Sports). And now software giant Microsoft has announced it's agreed to buy the game's owner, Mojang for a staggering $2.5 billion.

With millions of copies already sold and the possibility for plenty of growth still, it seems Microsoft is tapping into something that thousands of school-age kids have known for a while: Minecraft is awesome.

If you’re unfamiliar with Minecraft, you likely don’t have a kid over the age of six at home. Even if you have heard of the game but haven’t really played it, you might be scratching your head about what the big fuss is all about. After all, from first glance, Minecraft looks about as unsophisticated as you can imagine.

With its oddly crude graphics, Minecraft might remind parents of Dire Straits’ “Money for Nothing” video. The game is also an oddity in that it doesn’t rely on earning points or mastering levels -- it doesn’t even come with instructions or have any rules at all.

And that, right there, could very well be the secret to its appeal.

Minecraft has been called the ultimate sandbox game. It allows players to take 1x1 cubes of different materials and build anything they want, from Roman cathedrals, to roller coasters to imaginary jungle worlds, and make the game what they want it to be.

Minecraft can be played over several platforms, from desktop PCs, to tablets, to smartphones. The basic version contains two modes: Survival and Creative. Survival is more like a traditional video game. Players have to collect tools and build protection while collecting resources to feed and arm themselves against the bad guys that come out at night: Zombies, Creepers and the dreaded Endermen, for example.

In Creative mode, there are no bad guys; the fun is just in building things using various forms of blocks.

Some have compared the game to a digital version of Lego. And, as the ads say, the adventure is up to you.

Minecraft stands rather uniquely in the gaming world as well for the fact that both boys and girls are drawn to it. That’s a rare thing in gaming, where so many games are male-oriented and focused on shooting and destroying, and where so many female-oriented games are dismissed as lightweights. Minecraft is inherently gender-inclusive, appealing to anyone interested in just building stuff.

From the moment Minecraft’s creator, Markus Persson, coded it up in 2009 at night while working a day job at another gaming company, the game has been a hit. Not only has it been one of the most downloaded games ever, but current players have maintained their loyalty. That may be because there’s really no way to ever “master” or grow tired of Minecraft. No rules means no endpoint, so players can add on to their worlds infinitely or play multi-player games and visit the worlds of their friends.

What also makes Minecraft exciting is that the game can be -- and regularly is -- modified by players. With “mods,” as gamers call them, players can create add-ons to the game, to invent new types of building blocks, for example, or to give characters special powers or even create games that can be played within the bigger Minecraft game.

That aspect makes the game appealing to many tech-savvy parents who hope that Minecraft can help get their kids interested in learning computer coding.

Despite the fact that computer science jobs are widely seen as the high-paying careers of the future, the tech world has long bemoaned that there are not enough kids learning programming and taking degrees in computer science to meet the expected demand.

Even big names like Mark Zuckerberg and Bill Gates have been advocating the “learn to code” movement and supporting non-profits such as Code.org, which is pushing to get coding and programming taught in schools alongside math, science and engineering.

A U.S. company called ThoughtSTEM may have found a way to make coding interesting to Minecraft lovers. It’s created add-on software called LearnToMod that aims to teach children how to build their own Minecraft mods.

Through ThoughtSTEM, students can even sign up for online coding courses to earn credits at the University of California — no matter what their age.

Others are dreaming up ways to harness the popularity of Minecraft in the classroom.

Joel Levin, a computer teacher at a primary school in Manhattan, co-founded a company a couple of years ago called TeacherGaming that has taken Minecraft and adapted it so it can be used by teachers in the classroom. They call their customized interface MinecraftEdu.

Teachers are drawn to the game because it taps into something kids are into anyway -- games -- and brings lessons to life by making it hands-on.

Some teachers, for example, are using the game to pre-build virtual ancient worlds and then assigning students to work in groups to complete quests, such as fortify a village against marauders. Not only do the kids learn to work together and problem solve, they also pick up a few history lessons about ancient urban planning and warfare along the way without even realizing it.

Other teachers are downloading Minecraft teaching mods to set up experiments to teach students about gravity, velocity and other forms of physics. Still others have created giant models of animal cells, to teach biology.

Matthew Oldridge, who teaches math in the Peel District School Boards, uses Minecraft with his Grade 6 class to teach linear and volume measurement. He says the game is a natural fit.

"Provided the learning goal is strong, and the math concept behind it is strong, it will work," he told CTV Toronto's Naomi Parness earlier this year.

Sara Grimes, with the University of Toronto's Faculty of Information who researches children's digital media culture, says using Minecraft and other video games in the classroom can help get students excited about what they're learning.

"It presents an exciting opportunity to get kids engaged in a way that other more traditional means don't always achieve," she said.

The books, aimed at kids in Grades 3 through 7, have already sold more than 6 million copies combined since their release in November and now Scholastic is aiming to release another later this month. The books not only appeal and fascinate children, they encourage kids to become better readers so they can learn more tricks to get ahead in Minecraft.

One Grade 2 teacher, Elizabeth Madarang, told the Associated Press that she ordered the Minecraft books for her classroom after her students kept referring to the game in their writing reports.

“I definitely see Minecraft manuals encouraging students to read,” Madarang said. “They use critical reading and analytical skills, then apply their new learning to their Minecraft games.”