Guests asked to put smartphones, tablets away at 'unplugged weddings' 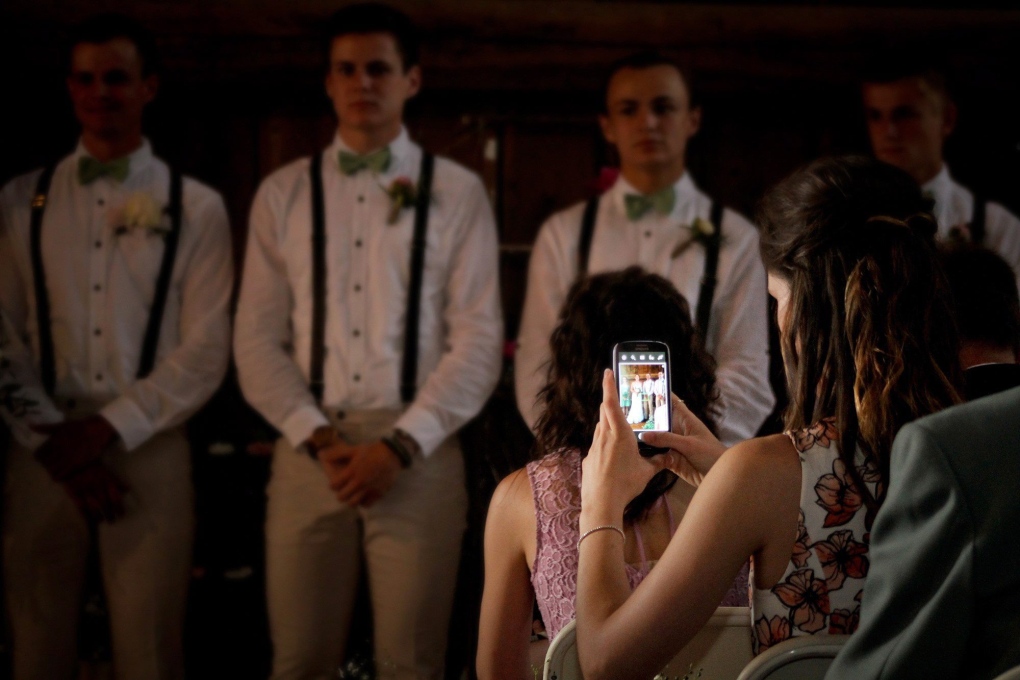 A guest is seen capturing an image on her cellphone at a wedding photographed by Lainie Hird Photography in May 2015. (Supplied photo / Lainie Hird / The Canadian Press)

TORONTO -- Here comes the bride -- and out come the smartphones.

Wedding guests are often keen to capture all the special moments during a couple's big day. But the flashing glare from cameras, phones and even tablets can prove disruptive during the ceremony -- so much so that some couples are asking their guests to power off their devices.

Photographer Lainie Hanlon recalled asking a camera-toting wedding guest who was obstructing her view to take a seat -- and she refused.

"She apparently takes photos on the side as a part-time hobby and I was a very bitter photographer after that because she basically ruined every single ceremony photo that I had," recalled Hanlon, owner of Lainie Hird Photography in Ingersoll, Ont.

Hanlon said gadget use during ceremonies has worsened in recent years, with guests not only taking smartphone photos but videotaping the entire ceremony.

She broaches the subject of "unplugged" ceremonies as an option for clients tying the knot.

"I give them an example: If I'm standing at the altar with the groom and I'm looking down, all I see are cellphones, is that something that you're going to want to see in your photo? Ninety-five per cent of them now say: 'Yeah, you're right, this isn't something that we want.' ... You can't redo a ceremony."

Stephanie Fusco recalled attending a wedding where a woman was jostling for position with the photographer during key moments of the ceremony. She knew she didn't want to face a similar issue for her own recent nuptials to Michael D'Amico.

Both of their families and Fusco's close friends were aware of her concerns. She also expressed her wishes and reasons behind an unplugged ceremony in a post on her lifestyle and beauty blog, Leopard is a Neutral.

Guests wound up taking photos anyway during the ceremony held at a Catholic church in Toronto. But rather than being upset, Fusco said she was "really grateful" for the additional images.

"I think what I was most concerned about ... was just being distracted by people and people having a bad experience because of people trying to get photos," said Fusco, 26, a social media professional who works in public relations and communications.

"I think we've all been that guest at a wedding or at an event where you feel like you're watching the whole thing through somebody else's smartphone. And on the day of, I honestly didn't notice."

Tracey Manailescu, co-founder of The Wedding Planners Institute of Canada, said couples can inform guests in advance that they've opted for an unplugged ceremony. With many couples launching websites as part of their big day, that might be a good place to send a message to guests.

"Put a note on the program about it as well (stating): 'We would really like you to be in the moment with us and seeing our exchange of love. Please put the cameras away at this time and we promise a lot of photos together afterward,"' said Manailescu.

Ottawa-based officiants Keith and Lynne Langille have started encouraging couples to opt for unplugged ceremonies, which Keith said now account for about 90 per cent of their weddings.

Langille said he announces the plans to guests just before the event gets underway, but he does allow them to capture a few quick snaps.

"We give them 20 seconds at the beginning of the ceremony to go nuts with their cameras, to act like the paparazzi. And in fact, I would say guests get more pictures taken during those 20 seconds than they would had they been popping up throughout the ceremony.

"The photographers love it because, of course, now they don't have to deal with the problems that they have with guests jumping up and down and getting in their way and flashes going off at the same time. But the guests feel more comfortable doing it because we've encouraged them to do it. And then they sit down, they relax and they enjoy what is an awesome ceremony."