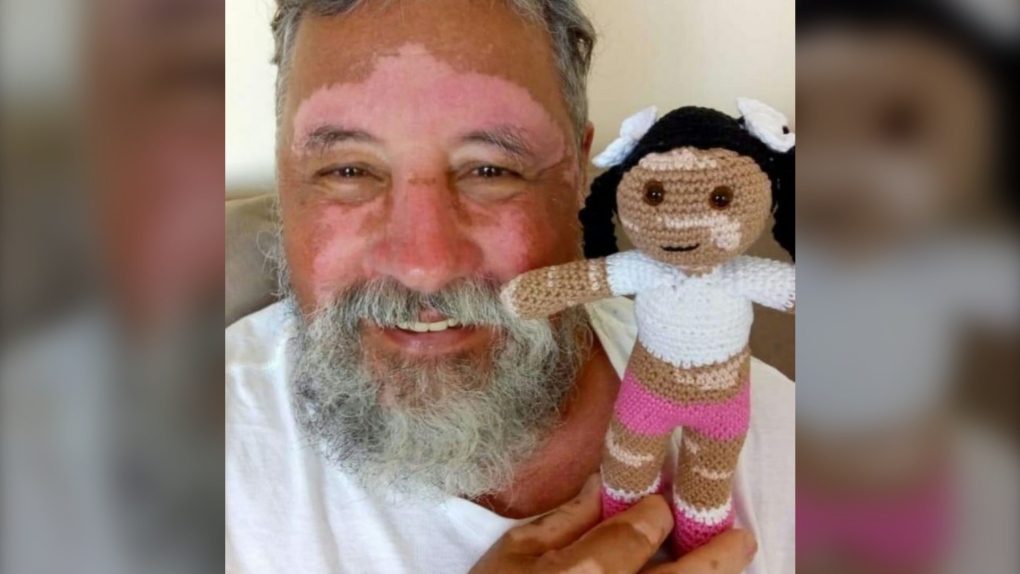 TORONTO -- A Brazilian grandfather who suffers from vitiligo is being praised for his craft of crocheting dolls with different body types, skin disorders and visual impairments.

João Stanganelli Junior, 64, has been living with vitiligo, a non-contagious skin condition characterized by splotchy patches of missing pigment, for nearly half of his life.

Translated from Portuguese, Stanganelli told CTVNews.ca over Facebook Messenger that he wanted his granddaughter Isabella to have something to remember him by.

And, after a suggestion from his wife, he began crocheting “as a challenge.” It only took the man five days of learning, before he made a doll for his granddaughter.

But after photos of the doll were passed among his personal circle, people began asking for their own personalized dolls.

Some began asking for dolls in wheelchairs, while others asked for dolls with hearing aids. The popularity of his dolls exploded.

He told CTVNews.ca that he’s been “amazed by people asking for dolls” and felt “gratitude for the varied responses of adults and children.”

Stanganelli said that although vitiligo hasn’t caused him “any inconvenience” personally since he was diagnosed at 38 years old, he knows others with it aren’t so lucky -- particularly children.

People with vitiligo can be psychologically devastating, according to the American Academy of Dermatology and Stanganelli said people and parents of those with the disorder have been reaching out.

He said people have told them that the dolls have been “helping with their self-esteem.”

Stanganelli is grateful for the response but said that the crocheting isn’t for everyone as it can cause irritating calluses on peoples’ fingers.

He said his online reach has far expanded beyond his home in Bragança Paulista, Brazil, with him being interviewed by outlets across the world

And he said that now it’s getting hard to stop crocheting because of the joy he feels from people reaching out.

The grandfather said if he were to have a message for people who don’t understand vitiligo, it’s: “The spots I have are beautiful. What hurts me are the flaws in peoples’ characters.”