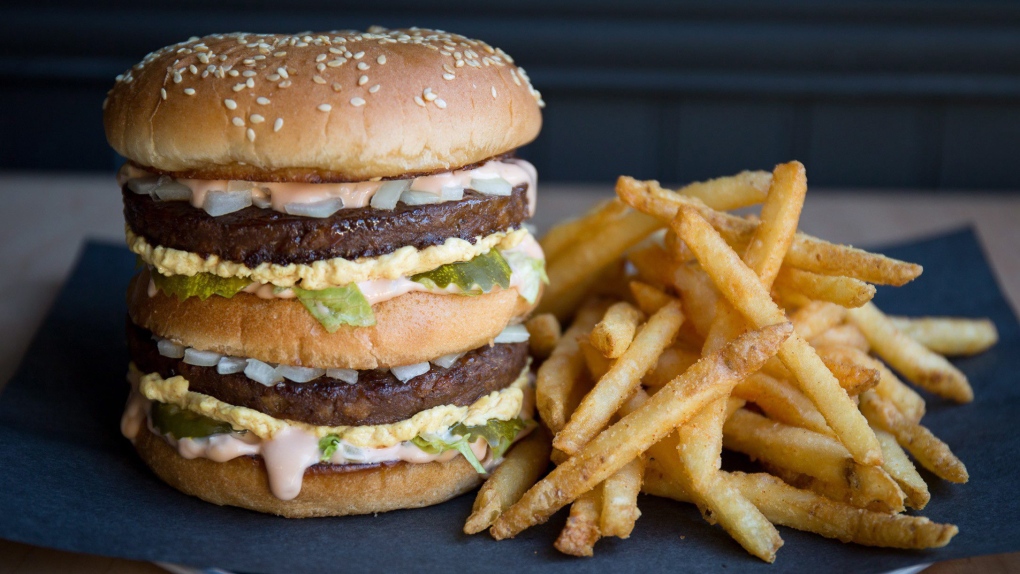 TORONTO -- Just because you follow a vegan diet doesn't mean you don't want to indulge in a burger.

"People don't just go vegan to be healthy. For a lot of people it's an animal issue, but they still want burgers and bacon and everything else so they're looking for those really satisfying substitutes for that," says Candice Hutchings, who shows viewers how to repurpose traditional food offerings on her Edgy Veg YouTube channel.

Her most popular recipes include a vegan take on the McDonald's Big Mac and Buffalo "chicken" wings -- with the meat being a dough made of vital wheat gluten, nutritional yeast and spices.

Hutchings started making vegan recipe and lifestyle videos several years ago and then quit her advertising job last October to devote herself full time to the project.

"When I went vegan six years ago my biggest issue and what was making me fall off the wagon constantly was there wasn't food I wanted to eat. Everything was brown and oatmealy. The comfort food was really missing and I couldn't find it anywhere at the time," says Hutchings, who first abstained from dairy products to clear up skin problems.

"There weren't any restaurants that served it. There weren't really any online recipes that I could find. I started kind of experimenting because there was such a void in that market."

Vegans and vegetarians don't eat meat. But while vegetarians will eat dairy products and eggs, vegans generally won't and also avoid honey or any food derived from animals.

"Once you get into a lifestyle you tend to learn a bit more about animal agriculture and kind of what's going on in the industry and all the horrible things that are happening and after seeing that I couldn't look back. You can never unsee," Hutchings says.

Restaurants specializing in plant-based foods have been springing up the last few years, but one that's attracted a lot of social media attention in the last few weeks is Doomie's Toronto, a partnership between the owners of the popular Hollywood restaurant and Ecorazzi, an online vegan magazine that hosted last year's Toronto Vegan Food and Drink Festival.

"Doomie's is trying to break a number of vegan stereotypes that exist out there today, one of which is all vegans are just super health conscious and only eat grain and rice bowls and kind of steer away from eating anything unhealthy. And I guess we're just trying to showcase the fact that vegans are just like anyone else," says Cara Galloway, communications and event manager for Doomie's Toronto.

"They sometimes have cravings for things and they don't necessarily only eat salads and fruits and veggies."

Patrons must ask their server for the "secret" $16 Vegan Mac Daddy. The mock Big Mac comes with fries and features house-made toppings of vegan mayo for the special sauce and a soy-based "cheese."

Hutchings waited for two hours last week to get a table at Doomie's and said it was worth it. She found the food resembles what she makes on Edgy Veg.

"There's Hogtown Vegan in Toronto, but they're more on the comfort food side whereas I found this was like junk food. It gets that junk food craving out of your system."

Much of the food at Doomie's is based on soy- and wheat-based products.

Hutchings thinks one reason people fail when creating vegan lookalikes is they try to adapt other vegan recipes.

"I look up the original recipe so if I'm trying to make, let's say a Philly cheesesteak sandwich or chicken wings, I look to see what spices they're actually using in the wings and what they're using in the batter and then I use vegan substitutes."

For meat, she may use mushrooms, which have a meaty taste and texture. Or she prepares seitan -- also called wheat meat -- from vital wheat gluten. She uses soy or almond milk instead of cows milk.

A favourite indulgence is cauliflower "wings," which she coats with a spiced breaded mixture, then double deep-fries and tosses in hot sauce.

"I think that is the closest thing to wings I've had yet. It's the same kind of texture. The cauliflower doesn't have a real cauliflower flavour. It has that meaty pulled pork flavour.... It was satisfying and anyone I've served it to, it blows their mind."