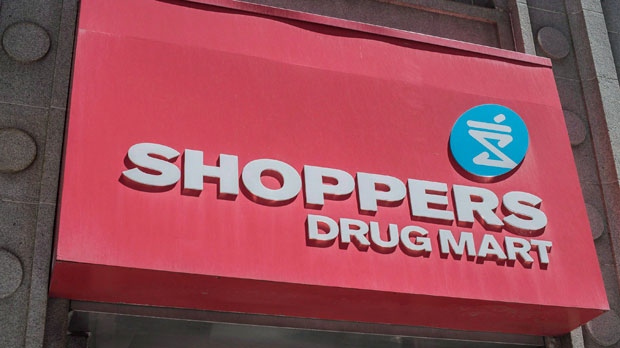 The logo for Shoppers Drug Mart is shown in downtown Toronto, on Tuesday, May 24, 2016. THE CANADIAN PRESS/Eduardo Lima

TORONTO -- Medical cannabis users in Alberta can now get their therapeutic pot from Shoppers Drug Mart, with the retail giant opening its second online platform Tuesday in the western province as it pursues the growing market.

The launch follows the January debut of Medical Cannabis by Shoppers Drug Mart in Ontario, where the company says uptake "has been strong."

As in Ontario, the Alberta platform touts "expert advice and counsel from trusted health-care professionals," including tips on the purported health properties of various strains, proper dosages and titration techniques.

That information and support is sorely needed, says Dr. Hance Clarke, a member of the chain's advisory board on medical cannabis.

He says the advent of legalization has brought with it dubious health-and-wellness claims that are likely pushing some inexperienced users to self-medicate in the recreational market -- both legal and not -- where they get hazy information.

"And I'm just like sitting there (thinking), 'I must be in outer space.' That is literally what has been happening for the past five years."

Recreational cannabis salespeople are prohibited from recommending strains for health impacts and must prove they are familiar with these constraints before working in a bricks and mortar shop.

In Alberta, retail staff must be certified by the SellSafe, in which they are quizzed about the province's cannabis laws.

The similarly structured CannSell program in Ontario, Nova Scotia and Prince Edward Island was devised by Lift & Co. in conjunction with MADD Canada, the group best known for its impaired driving advocacy.

Andrew Murie of MADD says the group is trying to get more provinces to adopt the CannSell program, bemoaning a lack of consistent guidelines. He says the CannSell approach takes into account possible hurdles a retail worker might encounter, while government programs in Alberta, Saskatchewan and Manitoba appear more focused on rules and regulations.

MADD's program includes real-world scenarios bud-tenders are likely to encounter on the job, such as how to recognize fake ID and signs of intoxication, and how to discuss a strain without advocating purported health properties, he says.

"When we started down the road of legalization of cannabis, I had really hoped there'd be federal leadership that you would have one set of retail-type of operations, one set of training and it's just been like a patchwork blanket," says Murie.

"There's real inconsistency out there; there's no evaluation of the programs, including ours, so you really wonder from province-to-province (about) the calibre."

Alison McMahon of Cannabis at Work also sees room for improvement when it comes to training recreational retail staff.

"The government courses are very, very focused on the rules, essentially, as they should be," says the Edmonton-based consultant, whose company recruits workers with cannabis businesses.

"Where the rubber hits the road is people are looking to understand what it's actually like to work in the cannabis retail environment and how to do that successfully in terms of how to interact with customers in the store to make it a good customer experience.... It means we're all kind of learning as we go."

When it comes to medical cannabis, Shoppers is positioning itself as that single, trusted source for patients looking for guidance. Many doctors, too, are in desperate need of reliable information, Clarke says.

"Unfortunately, only about five per cent of physicians either prescribe or have an understanding in terms of the depth of knowledge that they need to feel comfortable (in authorizing cannabis)," he says.

Gerald Major, president of the patients' advocacy group Canadians for Fair Access to Medical Marijuana, says he welcomes Shoppers' promise to offer a holistic approach to health care, as well as demystify the process of finding the right product.

"I think they'll help to normalize it, quite honestly, give it some more credibility," Major predicts.