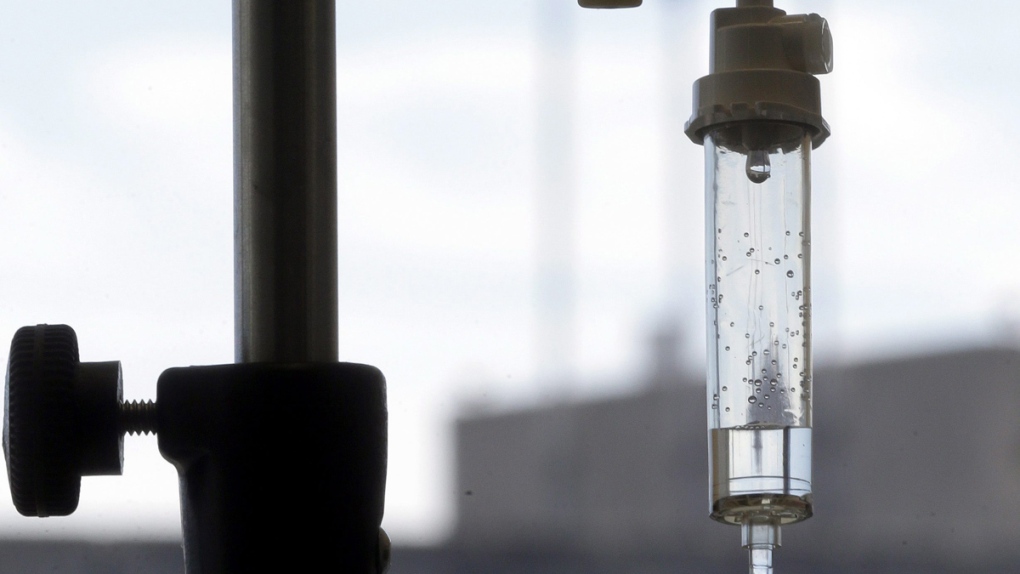 An infusion drug to treat cancer is administered to a cancer patient via intravenous drip at Duke Cancer Center in Durham, N.C., Sept. 5, 2013. (AP / Gerry Broome)

VANCOUVER - A scientist who developed a lab test to predict whether children with cancer are susceptible to potentially life-threatening side effects from three chemotherapy drugs is now focusing on five other medications so parents and doctors can discuss safer, personalized treatment.

Bruce Carleton, director of the Pharmaceutical Outcomes Programme at BC Children's Hospital, said adverse reactions linked to the five medications include bone disease, pancreatitis, anaphylaxis, nerve damage in the limbs, and inflammation of the mucous membranes, including those that may prevent patients from swallowing.

The four-year project is part of a Genome Canada study that will include the creation of a publicly available genetic database that could be accessed by researchers around the world, Carleton said.

He and his colleague Colin Ross have already identified genetic variants linked to three commonly prescribed drugs that cause heart failure, hearing loss or suppression of bone marrow, which reduces the body's ability to fight infections.

For the last two years, cancer patients Carleton has seen at a BC Children's Hospital clinic have been given a genetic test to determine if they are at risk for reactions.

Carleton said he would like children at all cancer centres in Canada to be genetically tested for adverse reactions to the potent medications.

They include anthracycline, which plays a role in dramatically improving survivability rates of many cancers but also causes heart failure in some cases.

"I think that we can begin the conversations before treatment begins about what the adverse effect means, instead of waiting for it to occur and saying, 'Well, this happens sometimes,' " Carleton said. "Often, parents say to me that the adverse effects of cancer chemotherapy were harder for them to manage and deal with than the survival questions because they're not prepared for it."

Their research includes analysis of over 6,100 DNA samples as they work to discover genetic susceptibility to side effects from the five drugs in the expanding field of pharmacogenomics.

Genetic testing provides oncologists with information that can help them weigh the risks and benefits of some treatment as they consider options that may include lowering the dosage of a toxic drug or providing an alternative therapy, he said.

"Sometimes the results are reassuring, that if you need to exceed the dose, the likelihood of toxicity is fairly low compared to other children," said Carleton, who is also a professor of pediatrics at the University of British Columbia.

Parents need to be part of the treatment discussion, he said.

"Coming up with a way for them to better understand what their child's risk is allows them to say, 'Survival isn't the only thing. I also want to know about harm,' " he said.

Bethany Prokuda's four-year-old daughter Rory Nichols was diagnosed with a tumour at the tip of her tail bone about three weeks after she was born.

She said genetic testing soon after Rory's first birthday revealed she was on a chemotherapy drug that put her at over 80 per cent risk of hearing loss related to F, S and "th" sounds in words such as Friday, Saturday and Thursday.

Prokuda, a registered nurse, said she decided to switch her daughter to a different medication after discussing options with Rory's oncologist.

"If they can give them an answer and maybe be able to tailor the therapies so that these kids do have good outcomes, it's absolutely essential," she said of genetic tests.

Prokuda said she began speech therapy for Rory, who is currently doing well while trying to keep up with her eight-year-old sister Avery.

"She's definitely progressed better from where it was. From age two to age four she's caught up on a lot of those sounds," Prokuda said.

Dr. Rod Rassekh, who has treated Rory, along with her primary oncologist, said the genetic test "really helped spare a lot of her hearing."

Rassekh said the parents of one of his patients who was tested decided they wanted their child taken off a drug that would cause heart problems, even if that put the youngster at slightly higher risk of relapse.

"So that's what I think this test does, is facilitates really good discussions with families, where they can be empowered to make decisions."

Rassekh said all oncologists at BC Children's Hospital now routinely use genetic testing, even though they were initially concerned about what they and parents would do with the information it provided.