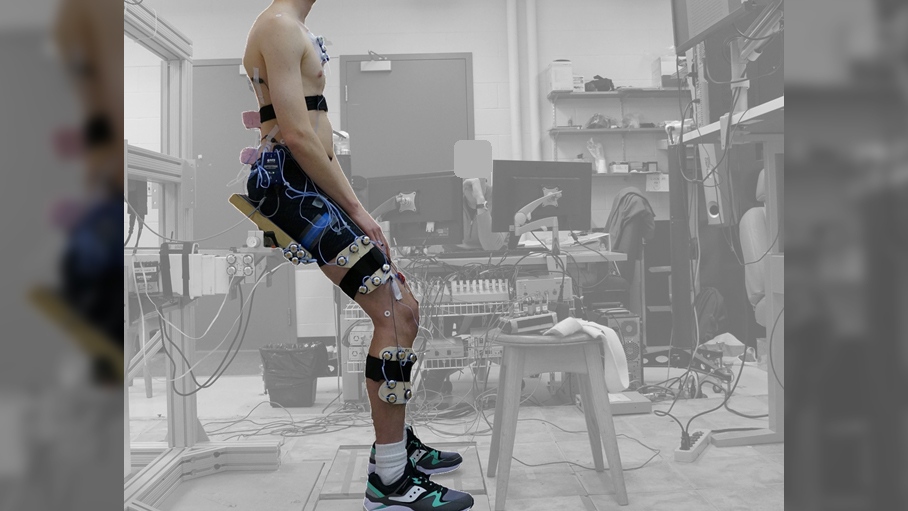 Using a series of muscle sensors, researchers examine if hybrid sit-stand postures were a good compromise between sitting and standing (Mamiko Noguchi, University of Waterloo)

A new study suggests perching or leaning could be more beneficial for those with lower back pain, at least when compared to sitting or standing.

University of Waterloo PhD candidate Mamiko Noguchi led a team to figure out the benefits and unexamined drawbacks to perched stances. Perching is any stance that falls between standing and sitting.

“Posture is considered one of the risk factors for lower back pain and perching above certain degrees … can improve that,” she told CTVNews.ca in a phone interview.

As part of their research, Noguchi and her team examined certain hybrid sit-stand devices which facilitated perching.

“For those who develop pain sitting or standing … it could be a good compromise,” she explained. “But your legs have to be [used] a bit more to hold people up.”

Researchers from uWaterloo and Western Washington University published their findings in Ergonomics earlier this month. They used a custom jig that allowed them to adjust the seat angle, Noguchi explained.

Her team hooked up 24 participants to muscles sensors on their thighs, back, and shins. Participants were then asked to stand, sit or perch in a variety of angles over 19 one-minute trials.

Study co-author Dr. Jack Callaghan told CTVNews.ca that so-called hybrid devices -- which prop people up to allow perching -- all fall within the “unused real estate between sitting and standing.”


Perching better than sitting or standing for lower back pain

Noguchi’s team found spinal postures in people who perched were better than in those who were standing or sitting, Noguchi says the position got people closer to the so-called “neutral spine” – the term for when peoples’ backs are subjected to less unnecessary tension and stress.

But there was a draw-back to these hybrid seating devices. Callaghan said the “muscle demands on the legs and the forces you undergo in the feet are quite demanding.”

He said hybrid seating like lean bars are a good idea but there are still challenges to address.

Existing hybrid seats -- which have only been designed for occasional use -- aren’t the perfect solution for prolonged amounts of time, Callaghan said.

Callaghan said the onus of their study was prompted by recent studies which showed how sitting can be associated with negative outcomes -- like cardiovascular disease. He said this led to a “knee-jerk reaction [for people] to stand at work.”

But, based on his kinesiology and the spine research, he said “standing is actually worse for our lower back than sitting.” In fact, a 2018 study showed standing can still lead to cardiovascular issues.

Based on this most recent study, he said the next question they need to answer is: “What could give the beneficial spine posture, [that’s] beneficial to the lower back without causing problems in the legs?”