Is your child getting Zoom burnout? What is happening and how you can help 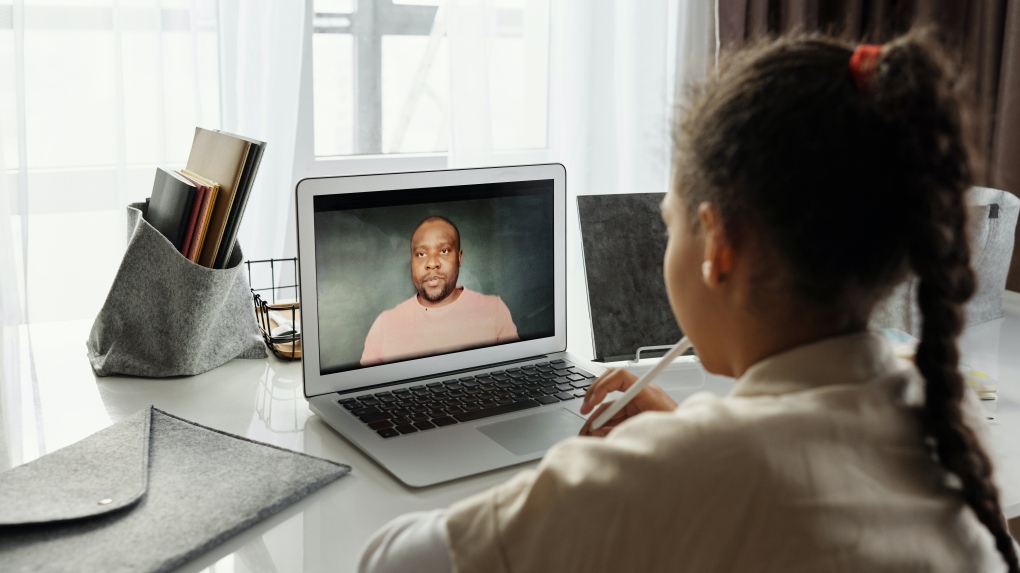 As some Canadian students prepare for a potential return to virtual learning, a tech expert says parents need to get involved and build in ‘mini-breaks.’ (Photo credit: August de Richelieu)

TORONTO -- Online learning was a difficult choice for Donna Cheung and her husband. Their daughter Graysyn, an energetic and outgoing only child, was starting senior kindergarten at a new school -- but with underlying health conditions in the family, her doctor recommended virtual classes instead.

Cheung’s daughter has been one of the lucky ones in many ways, she says, but even so, it hasn’t been easy.

“I do think that it’s hard when you have 28 kids in the class that are all five years old and under -- it’s hard to stay focused,” Cheung told CTVNews.ca.

“They don’t always sit in their chairs, I don’t know how much they’re actively listening and learning, or absorbing any of it … Group activities, doing things together, problem solving, there’s none of that.”

The virtual setting can be a challenge even for adults; now, some parents worry online burnout is already starting to settle in for their kids.

Some of the signs may include irritability, outbursts, or lethargy, according to Jeboah Miranda, who runs a foundation that includes teaching female youth how to cope with hardships.

“There’s a noticeable change in behaviour from their day-to-day personality,” said Miranda.

What is exhausting about working on a video platform is that it requires more focus, according to experts. It is especially challenging for children because developmentally, they are at a stage where they are working on learning how to pay attention. Putting them in front of a screen requires them to exert even more effort to stay focused.

“The amount of stimulation they have to process is unappreciated,” said Miranda.

“They’re not taking breaks, the video’s open, they’re monitoring different things. All that requires a tremendous amount of energy that they didn’t have to apply before.”

LOSING WHAT CONNECTS US

Even more importantly for children is that video conferencing makes it harder to process non-verbal cues, like facial expressions, tone, pitch of voice, and body language, says Nikki Martyn, the program head for early childhood studies at University of Guelph-Humber.

It’s not that children are unable to see those cues, but that processing them over video requires more effort. It is a different and more challenging kind of engagement, because unlike adults, children do not have the same level of experience to draw and adapt from -- developmentally, they are still learning to master these skills.

“It’s that extra ‘stuff’ that we often don’t really think about -- it comes naturally -- but it keeps us connected and energized, and it keeps us connected to each other,” Martyn told CTVNews.ca, explaining that virtual learning also lacks the in-class energy that helps keep students more anchored and focused, even as they are able to let their eyes wander while they listen and process information.

These obstacles become even more challenging for children who have a disability, where engaging with the world is already a struggle, said Martyn.

She points to silence as an example of how we engage with others. It is a normal part of conversation, and through body language, gestures and facial expressions, we generally know whether the other person is simply thinking or needs a break, for example.

“Now, in video conferencing, what it often feels like is anxiety: ‘Did the technology freeze? Can you still hear me? Am I here?’ … Because it’s not as interactive, we can’t allow for the silence and the space in the same way,” Martyn said, noting that unlike kids, adults intuitively fill in that silence by explaining what they are doing.

The common silence that comes from a delayed response -- the time it takes to unmute, for example -- can also leave a negative impression on others, she added. Martyn pointed to one study that showed people were perceived as less friendly or even less focused when they were too slow to respond over telephone or other conferencing systems -- even if the delay was by a mere 1.2 seconds.

“It can feel emotionally overwhelming to a kid, especially when developmentally they’re learning these emotional skills and ability to communicate,” said Martyn, who previously founded a private elementary school and early learning centre.

“This isn’t the way that we would naturally learn it, so it’s a little bit disruptive.”

To demonstrate they are paying attention, online students may feel the need to keep their eyes focused on the screen, yet staring so closely at someone’s face for an extended period would be completely unnatural in an in-person setting.

“It’s not part of a natural conversation and it will not be comfortable for most children,” said Martyn, adding that they cannot convey that discomfort with their body language.

“For a child who’s naturally shy, or maybe feels a little bit embarrassed, this will feel really uncomfortable, and there’s nowhere to hide … it can create anxiety, it can create fear.”

Many online teachers are aware of these challenges. Graysyn’s teacher, for example, has made an extra effort to structure their schedule to incorporate more small-group learning time to help engage children too shy to speak up or who are uncomfortable in the larger group setting. But this can also come at the expense of having less overall synchronous learning time.

There is also the self-consciousness that comes with being on video -- they are seeing their own face all the time. For teenagers especially, appearances and how they present themselves matter.

“They’re developing their identity and sense of self, right? And so how we look and how we are looking at our face adds so much pressure for our kids,” Martyn noted.

These stressful elements are compounded by other pressures as well that come with online learning.

For many parents, remote classes may feel like an opportunity to witness their child “in school.” It may be hard to resist nagging their child to pay attention when they appear unengaged or unresponsive to the teacher. This can add unnecessary stress as well on a child who may already be feeling anxious.

Online classes also means bringing strangers into your home, which can stir up other feelings of embarrassment or pressure for the child: worrying about a messy room, having to clean up, or how their home might be viewed by peers.

All these different elements can serve as a constant reminder of what we’ve lost -- the socialization with peers, the connection with teachers -- which can also fuel the fatigue.

“There’s an empathy or feeling that gets lost in it all and I think that’s really important for kids, because so much of where their focus is on, is play and imagination,” said Martyn.

HOW TO HIT RESET

With her usual extracurricular activities like dance and language classes either cancelled or moved virtually, Graysyn is spending even more time online and has far fewer outlets to burn energy, her mother says.

Add in the shorter and colder winter days, it will be dark by the time they log off from work going forward, making outdoor time together after school -- something they had been incorporating into their days for the last several months -- less likely.

Compounding the stress is the fact that parents themselves are also stretched, trying to support their kids while juggling working from home.

“It’s so much chaos they didn’t have to deal with before,” said Miranda, who also does keynote speaking focused on mental toughness.

To help offset some of these challenges that can lead to Zoom burnout, Martyn and Miranda offer some suggestions for parents and children.

Screen adjustments: If possible (and this may involve discussing it with their teacher), set up the screen so your child’s face can sometimes be off to the side a little, Martyn suggests. This gives them a sense that they do not always have to have direct eye contact. Allow them opportunities to hide themselves from view if possible, so they are not constantly distracted or preoccupied by their own faces all day.

Take breaks: Give their eyes and brains a rest, and let their body do something different, such as stretching, eating, or having a change in environment. Going for a quick walk around the block, being in nature, or even stepping outside briefly can help reduce stress and improve focus. Children with attention issues especially need some active time.

Set boundaries and transitions: These are important for some children, according to Martyn. If possible, create a space only for school where they do not need to go during evenings and weekends. “It’s really hard when you’re walking through school all the time,” Martyn said, acknowledging that creating a separate space may not always be possible. Discuss creating a routine before and after school or at the start and end of the school day to mark the transition between “home” and “school” so the day does not blend together.

Do not multitask: When students are on the computer, minimize or close all the other applications in the background, says Miranda. There are a lot of distractions at home, so multitasking may be tempting, but get them to focus on one thing at a time.

Mental health days: If your child is having a hard time, take a break and recalibrate, says Martyn. It is an opportunity to teach your children how to advocate for themselves, to identify their emotions and put into words what they are feeling and why. It is especially important for parents to show love and support, listen to those feelings and allow your child to experience them. The best thing for their mental health is for them to feel heard and understood.

If your child is feeling anxious, try mindfulness exercises like deep breathing or other coping mechanisms to calm their anxiety, Miranda added.

It’s OK to doodle: If you find your child doodling, it’s OK, according to Martyn, who points to research that has shown people who doodle actually pay more attention and recall more details. It is a form of fidgeting and an attempt to pay attention, Martyn says, so it engages our brain to listen. More generally, it is really important that play and art be embedded into their day, even if it’s not in school, she added. Children and teens express themselves through art and play to process learning, their emotions, relieve stress, and make sense of the world.

“We’re going to screw up all the time right now, there’s no perfect,” Martyn said, but added: demonstrating and encouraging compassion, kindness, gratitude, and making sure your child does not feel alone will all help mitigate some of the challenges with online learning.