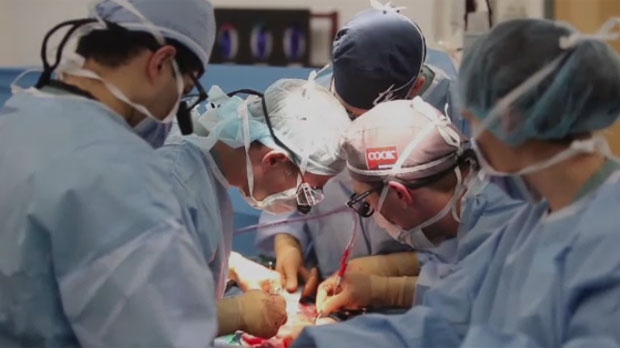 Surgeons in an operating room are seen in this file image.

Doctors in Australia successfully completed emergency heart surgery despite a small fire erupting inside the man’s chest cavity during the procedure.

According to a presentation at an annual meeting of the European Society of Anaesthesiology, the 60-year-old man went to hospital in Melbourne, Australia in August 2018 to repair a potentially fatal tear in the inner layer of his aorta when the fire burst.

During the surgery, doctors noticed some destroyed parts of his right lung stuck to his sternum, an issue often caused by chronic obstructive pulmonary disease (COPD), which the man had previously. When the doctors went to separate the lung from the sternum, one of these destroyed parts popped and air began to flow through the tear.

Doctors then increased the amount of anesthesia and air being pumped into the patient to prevent respiratory distress, but soon after, a spark from an electric device used to cut away tissue caught a surgical pack on fire due to the excess oxygen in the man’s chest cavity.

Amazingly, doctors were able to extinguish the “flash fire” and complete the operation without issue.

"This case highlights the continued need for fire training, prevention strategies and quick intervention to prevent injury whenever electrocautery is used in oxygen-enriched environments,” Shaylor wrote in the release.

“Surgeons and anaesthetists need to be aware that fires can occur in the chest cavity if a lung is damaged or there is an air leak for any reason, and that patients with COPD are at increased risk."