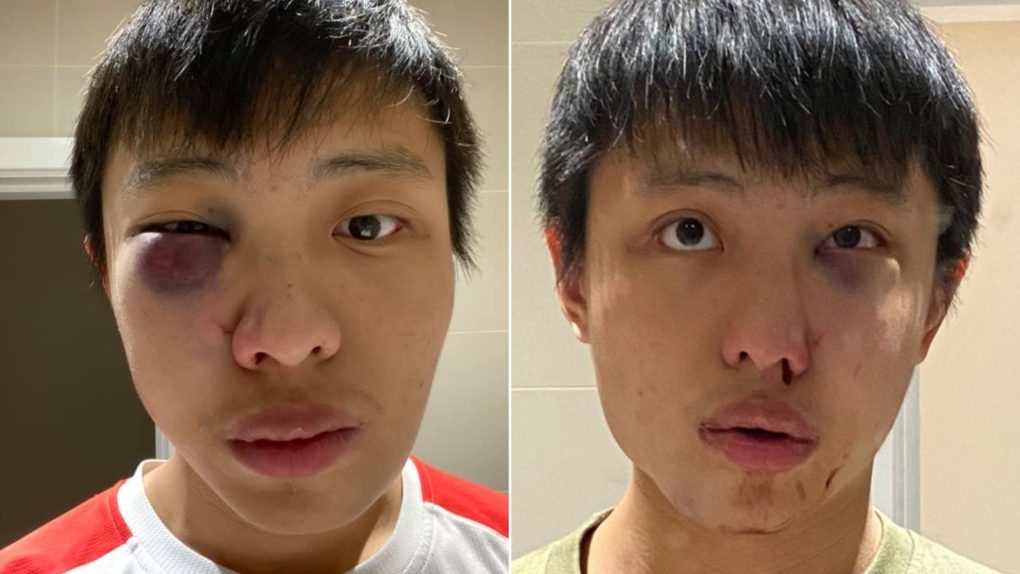 An East Asian student was assaulted in a "racist" coronavirus attack in London. (Jonathan Mok/Facebook)

A 23-year-old Singapore man of Chinese ethnicity who was studying in London has spoken out about racism linked to the coronavirus after suffering facial injuries in a "racially aggravated assault."

Jonathan Mok wrote about his ordeal in a public post on Facebook Monday, detailing how he was attacked by a group of people on Oxford Street, a busy shopping area in the centre of the British capital, at about 9.15 p.m. local time (4.15 p.m. EST) on Feb. 24.

The attack comes at a time of increasing xenophobia against people of East Asian appearance in the U.K. and around the world.

"The guy who tried to kick me then said, 'I don't want your coronavirus in my country,' before swinging another sucker punch at me, which resulted in my face exploding with blood (from my nose)," wrote Mok.

Mok said doctors told him the assailants had left him with "a few fractures" in his face and he might need reconstructive surgery.

London's Metropolitan Police confirmed in a statement that they are investigating the "racially aggravated assault" against Mok.

"Enquiries continue to identify the suspects; including an assessment of available CCTV," said police in a statement. "There has been no arrest at this stage."

Mok said this was not the first time he had suffered racist abuse in the past few weeks, and underlined his determination to highlight an important issue.

"I've studied in London for the past 2 years and every year, I am subjected to racist remarks (whether innocent or made with malice)," he wrote. "To those people who told me that London isn't racist, think again."

Mok's case is one of a number of incidents that have occurred in the U.K. during the global coronavirus outbreak, and hate crime awareness group Stop Hate UK recently raised concerns.

"Stop Hate UK has recently received an increasing number of calls, across our helpline areas, from people experiencing racism, discrimination and verbal abuse, arising from perceptions that they are members of the Chinese community and therefore likely to be carriers of the coronavirus," said the organization in a statement.

"We find this deeply concerning and we want our Helpline areas to know that we are here to help, advise and reassure anyone affected by such incidents."

Discrimination has been rising in the U.S., with experts blaming ignorance and misinformation for racist and xenophobic attacks against people who appear to be East Asian.

"With news of the coronavirus, we've seen an uptick in fear of people who look like this," said Rosalind Chou, a sociology professor at Georgia State University. "Real people are affected."

This story has been updated to include the nationality of the student.

Prince William jokes that he and Kate are spreading coronavirus

How and when you should be tested for the coronavirus in the U.S.

Newsletter: Get the COVID-19 Brief sent to your inbox

How contagious is COVID-19 compared to other viral diseases?

U.S. testing for coronavirus is expanded to patients who have a doctor's order, CDC says

What airlines are doing to sanitize planes

Coronavirus in Canada: How many positive cases?

Preventing COVID-19: Should you clean your smartphone?

Emergency isolation: What powers does government have to quarantine Canadians?

Who is most at risk of dying from coronavirus?

Novel coronavirus in Canada: Here's a timeline of COVID-19 cases across the country