Vaccines not enough to stop fourth wave of COVID-19 in Canada, experts warn

TORONTO -- Canadians need to use all public health tools available, including masking, physical distance and testing, to avoid lockdowns and protect the unvaccinated as a fourth wave of COVID-19 grips the country, infectious disease experts say.

With more than 10 million Canadians unvaccinated against COVID-19, the chances of more widespread lockdowns are possible as some provinces’ hospital systems remain strained from earlier waves of the pandemic.

“We can't ignore that there are literally millions of people in Ontario, and in Canada, that are unvaccinated,” Dr. Isaac Bogoch, an infectious disease specialist and member of Ontario’s vaccine task force, told CTVNews.ca in a phone interview on Tuesday.

Even if all eligible Canadians got their shots, there would still be nearly five million Canadians who are not eligible to be vaccinated who would be at heightened risk, especially as the more transmissible Delta variant takes hold.

With millions of people still at risk of infection, and many of them children, Bogoch said that Canadians should use all tools available to protect the unvaccinated, in order to avoid more full-scale lockdowns.

Preventing our hospitals from getting overwhelmed will be a key factor in preventing lockdowns across the country.

“Unfortunately, when we compare Canada to other comparable countries, our ICU capacity per capita is not very robust,” said Bogoch.

This is what resulted in lockdowns during the third wave, he added, referencing the "dire" situation earlier this year in which ICUs in some provinces hit capacity, patients were sent to other cities, adult patients were in pediatric ICU beds, and surgeries were cancelled.

“We can't let this wave get out of control because the more cases there are, the more hospitalizations, the more ICU [admissions] and tragically, the more deaths we will see this fall,” Craig Jenne, Canada Research Chair in infectious diseases at the University of Calgary told CTVNews.ca in a phone interview on Tuesday.

With infections already on the rise, Jenne says this wave could have more cases than previous waves if public health measures aren’t enforced.

“If you look back to last year’s cases, they really didn't start rising sharply until we got into September with people back indoors at school,” he said. “This year, the cases really have started to go up in a number of places – Alberta, Ontario and British Columbia in early August, basically the wave has a month head start.”

Similar to Ontario, Alberta approximately 1.5 million unvaccinated people in the province, so while vaccinated people have a lower risk of severe illness, hospitalization and death, there are still many Canadians who don’t have that protection, which could send the fourth wave off the rails.

“We have millions of Albertans who are not vaccinated, and if we think of the total number of people that have been infected as well under a million, we still have more people who are unvaccinated that could be infected than have been infected at any point during this pandemic,” said Jenne. “So, if we let this virus run unchecked and the majority of those unvaccinated do get infected, we will see unmanageable numbers in the hospital.”

ICU occupancy in Alberta has more than doubled since the start of August, he added. Earlier this month, there were fewer than 20 COVID-19 patients in Alberta hospitals; as of Aug. 24, there are 57.

The speed at which COVID-19 spreads adds more fuel to the fire, experts say. By the time case numbers reflect exponential growth, it’s difficult to claw things back.

“A lot of people see the numbers and think it's not a big deal, but it is like a freight train, it picks up momentum, and changes we make now can take several weeks to have an effect, so you have to be prepared for those curves to respond slowly to changes,” said Jenne.

“The risk of a breakthrough case is quite low, and most breakthrough cases that do occur, still result in very minor disease,” said Jenne. “The severity of illness is reduced dramatically among the vaccinated.“ 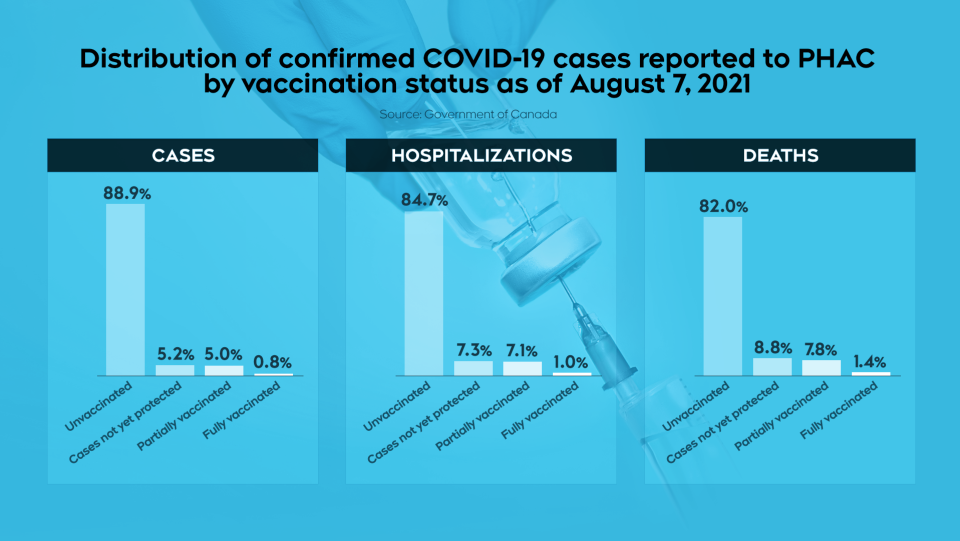 While a high rate of vaccinations will make this wave different from previous ones, so will relaxed public health measures and more travel.

“We'd love to think of ourselves, our provinces, as little islands but we're not. What happens in one part of Canada and one part of the world affects all of us, particularly as we're starting to travel more and more frequently, across different domains,” Dr. Lisa Barrett, a Halifax-based infectious disease specialist, told CTVNews.ca in a phone interview on Wednesday.

Since the outset of the pandemic, one message has prevailed: children don’t get very sick from COVID-19. Mounting cases among children in the U.S. show otherwise, so letting COVID-19 spread like wildfire among those too young to vaccinate isn’t a safe option, for both children and adults.

Controlling community spread of COVID-19 will be key to keeping children safe this fall as a fourth wave surges on.

“At the end of the day, vaccines still work, but we do have to keep in mind there are a significant number of Canadins who are not eligible for vaccines, again those under 12,” he said. “There is no way right now to protect them from the virus, other than physical distancing, wearing a mask, and ensuring the people around them are vaccinated.“

For Barrett, the unknowns of the Delta variant are cause for concern, and it’s too early to have a business-as-usual approach, until experts learn more about the long-term impacts of COVID-19 in children.

“Maybe in six months, we'll say: ‘that was a drop in the pan, these new variants, they don't have the same long-term side effects in one in 10 people,’” she said. “But until we know that I'm really, really, really strongly and firmly opposed to going back to a business-as-usual respiratory season.”

Just because kids likely won’t get as sick as adults doesn’t mean they can be left out to dry, unprotected while vaccinated adults try to resume normal life, she added.

“Kids get multi-system inflammatory syndrome that can almost kill them, and everyone says ‘well you know every disease kills a few people,’” said Barrett. “But, measles didn't give everyone encephalitis and severe brain damage, but enough of them that we [now] vaccinate everyone.”

And protecting kids from COVID-19 will add an additional layer of protection for vulnerable adults, to whom children can spread the virus.

The doctors agree that a safe return to school will be one of the biggest factors in keeping unvaccinated children safe during the fourth wave of COVID-19.

“It's so important to actually implement smart school strategies that focus on better-ventilated rooms, masking in the school, limiting class sizes, as well as cohorting,” Bogoch said. “There's all these steps, different provinces have different plans, and some I think are stronger than others, but one of the key issues is at the level of the school: how is it that they plan implementation is key.”

For parents who are worried about the school year, Bogoch suggests reaching out to the school being attended as not all schools are created equal. Some schools may be in communities already at higher risk for COVID-19, these same schools may not have all the resources available to them.

HOW TO CONTROL THE FOURTH WAVE

With so many Canadians vaccinated, getting control of the fourth wave can likely happen without the use of widespread lockdowns, instead regions can opt for more simplified public health measures that can be put in place relatively easily.

“Some of these public health measures we've been using for the last 18 months are really not that invasive, really simple to comply with and quite effective in slowing viral spread,” said Jenne. “Wearing masks, reducing overall capacity for some indoor events, I think, are really simple things that can happen, that will dramatically impact numbers.”

Even without those mandates in place, individuals can take it upon themselves to wear a mask and distance from others.

“If we take those approaches to a population level, not that we'll get to zero COVID, but we will be able to at least limit transmission in the community, and prevent our health-care system from getting stretched,” Bogoch added.

Provinces have already begun to respond to the increase in COVID-19 cases. Ontario has paused in stage three of its reopening, Nova Scotia has tightened border restrictions with New Brunswick, and Quebec has extended the reach of its vaccine passports.

“We have seen masks come back in parts of British Columbia, we have seen British Columbia opt for a vaccine passport-type system,” said Jenne. “We have seen even Alberta delay dropping asymptomatic testing and self-isolation. I think those are very clear markers that provincial health authorities are appreciating there is still risk, and that risk needs to be managed.”

While some provinces have implemented various forms of vaccine passports and certificates, Barrett said they can help, but could further marginalize unvaccinated populations.

“We know that people who are not vaccinated, especially in Canada where access has been better, those folks may have other systemic and very challenging reasons for not getting vaccinated yet, and we don't want to further marginalize people in any way by restricting them from being able to do things that other people do,” she said.

Controlling the fourth wave will rely heavily on testing both vaccinated and unvaccinated populations, so that public health units have much-needed data to determine where spread is happening and what activities are leading to major spreading events. While vaccinated individuals may have good protection, they should still get tested if they show signs of COVID-19 symptoms or have high-risk contacts, said Barrett. As has been the case for the last 18 months, the experts agree that anyone who has symptoms of COVID-19 should get tested and isolate.

By using all of these measures: masking, physical distancing, improved ventilation, vaccinations, hand-washing, testing and isolating, Canadians will have a good safety net if one of the safety measures isn’t quite enough. Jenne likens it to getting in a car – seat belts, speed limits and airbags are there to keep us safe on the roads, but drivers and passengers don’t just pick one, they use them all. There are even laws in place to ensure they do so.

COVID-19 is now a preventable disease, said Barrett, and it needs to be treated as such.

“I'm mindful of the fact that this is now a preventable disease, and I don't think we say that enough – but that's not just vaccines, that's all the tools in that toolbox.”

Vaccines not enough to stop fourth wave of COVID-19 in Canada, experts warn

Why haven't there been federal COVID-19 briefings during the election campaign?

Alberta, Saskatchewan not planning to follow B.C. and Manitoba on broad mask mandates

Everything you need to know about Quebec's vaccine passport app