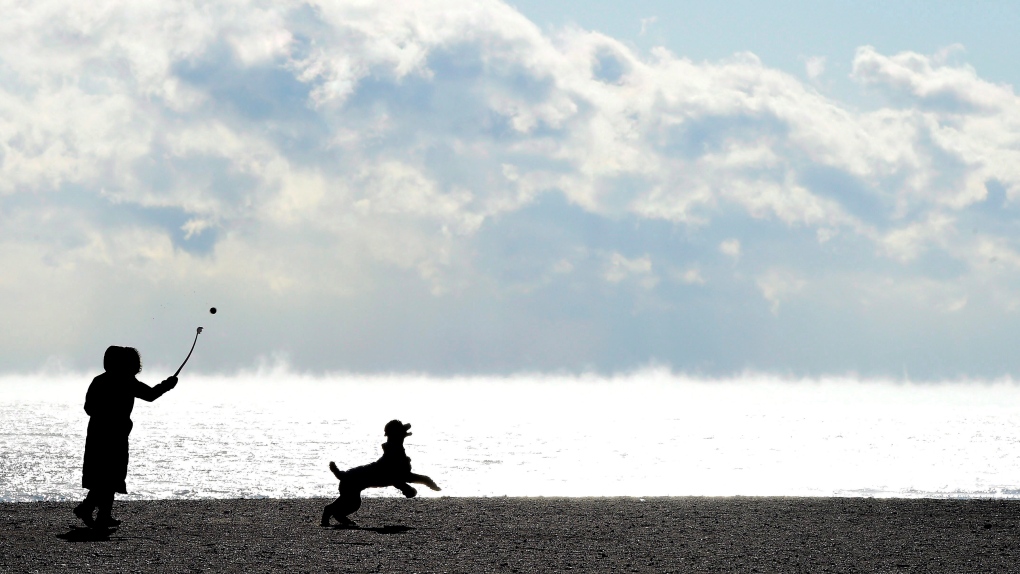 A woman throws a ball to her dog in Toronto on Wednesday, Jan. 7, 2015. (THE CANADIAN PRESS/Frank Gunn)

VANCOUVER -- When a British Columbia woman experiencing fever, headaches and weight loss for two months finally went to her doctor, a blood test revealed she'd contracted a contagious disease from a dog she'd rescued in Mexico.

Dr. Elani Galanis, an epidemiologist and public health physician at the BC Centre for Disease Control, said the case was surprising because the previously healthy middle-aged patient didn't seem to be a candidate for the transmission of brucellosis, which medical literature suggests can afflict people with weakened immune systems, or the very young and elderly.

"Up until this adult woman became infected and tested positive we felt like the risk to humans, although possible, was very, very low," said Galanis, who wrote about the anonymous woman in a recent issue of the BC Medical Journal.

The woman worked for an animal-rescue organization that transported dogs to Canada from Mexico and the United States, often driving there to pick up the animals, Galanis said.

On one occasion, she was bringing back a pregnant dog from Mexico and likely came into contact with the animal's pregnancy fluids as it spontaneously aborted two stillborn puppies, Galanis said, adding the dog later tested positive for the bacterium brucella canis and the woman was diagnosed after seeking medical treatment last December.

"Given the story in other places, like the rest of North America, this hasn't been seen much before," Galanis said of transmission of the disease to humans. "We're just starting to see it so I do believe it's a true emergence of a new problem."

"For us, the priority will be to ensure that physicians are aware that this is possible, that they ask the question about contact with animals, particularly imported dogs."

Rob Ashburner, a veterinarian and spokesman for the B.C. branch of the Canadian Veterinary Medical Association, said efforts to have stricter regulations on the importation of dogs involving multiple federal agencies have so far been fruitless.

"The Canadian Veterinary Medical Association has spent a lot of time trying to get the federal government to put some rules in place where animals imported from other countries should be tested for a bunch of communicable diseases, brucellosis being one of them," he said. "Dogs from the warmer climates have all sorts of parasites that we don't have here and they bring them in and affect our population as well."

Plenty of dogs are available for adoption in Canada, Ashburner said, adding rescued animals can be traumatized after long trips and bring with them behavioural problems people may not expect.

The Canadian Food Inspection Agency establishes requirements for animals such as dogs coming into the country.

It said dogs that are less than eight months old are inspected by its veterinarians at borders and older dogs are inspected by Canada Border Service Agency officers, who also review the animals' certificates, such as those listing any vaccinations.

"If the CBSA officer has any concerns, such as the animal showing signs of illness or incomplete/incorrect paperwork, they call a CFIA veterinarian for examination," the agency said in an email.

Ashburner said examinations at the border are not comprehensive and current regulations, requiring just a rabies vaccination, have been in place for decades, long before an increase in the number of pets and rescue-dogs being brought to Canada, sometimes with certificates that are bogus.

"In reality, just from personal experience, there are times when what the paperwork says is not true," he said, adding while more dogs are being brought to Canada, there are no national statistics on how many are coming in.

The Public Health Agency of Canada said it acknowledges the global movement of animals, including dogs, can facilitate the spread of diseases that can be passed on to people.

"Educating breeders, importers, rescue organizations and Canadians on both the risks and mitigation measures is important to manage this issue," it said in an email.

However, the agency did not respond to questions about whether it plans to consider any policy changes involving potential transmission of diseases to humans.

Emilia Gordon, a veterinarian and senior manger of animal health with the British Columbia branch of the SPCA, said various groups in the province are trying to create standards of practice for rescued animals.

"This is really an important issue for Canada," she said. "I've personally seen a number of significant diseases in animals that were rescued from shelters in other countries."

"We are increasingly seeing surrender requests for animals who were rescued from other countries and we've actually had to set an entire set of protocols and procedures in place to do risk assessments on these animals as they come in," she said, adding up to five imported animals a week are being brought in to shelters around the province.

The United States, Mexico and south and central America were the major source countries about five years ago but that changed in the last year, with more dogs coming in from elsewhere in the world, including Asia and Morocco, Gordon said.