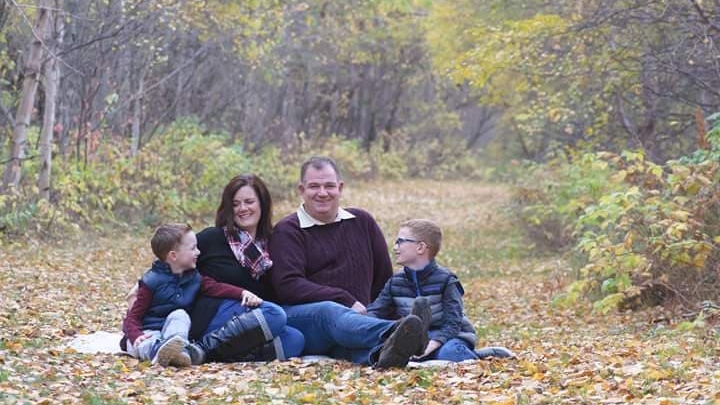 One afternoon in the winter of 2017, Corie Entrop’s 10-year-old son came home from school and began pulling out his hair. When the Alberta mother pleaded with him to tell her why he was doing it, he was unable to provide an explanation.

In the weeks that followed, Connor’s unusual behaviour became even more unusual. He kept pulling out his hair and even tried yanking out the family’s dog’s fur as well.

“It became a constant obsession to the point where he was giving himself bald spots all over his head,” Entrop told CTVNews.ca during a telephone interview from her home in Spruce Grove, Alta. in September. “We had to shave his head to keep him from doing it.”

Connor also started having panic attacks and acting out in the classroom. Believing his actions were related to his ADHD – which he was diagnosed with when he was seven – Entrop took him to see his psychiatrist who told her it was just anxiety and prescribed him antipsychotic medication.

Connor’s symptoms waxed and waned over the course of the year until things took a turn for the worse.

Entrop said Connor became so sick over Christmas that he was rushed to the emergency room.

After a round of antibiotics, Connor’s health improved and he was back in class after the winter break.

“That’s kind of when things fell apart,” his mother recalled.

Entrop said she started receiving near daily phone calls from the school about her son’s erratic behaviour. She said he stabbed himself in his arm with a pencil if a teacher refused to answer his questions, he hid inside lockers, flipped over desks, and ran around the classroom.

Eventually, Entrop said her son became a danger to himself.

“He would try to jump out of moving vehicles when I was driving. He was threatening suicide a lot. He would barricade himself into his room and string stuff around his neck trying to choke himself out,” she said.

Months later, Connor was placed in a specialized program offered by the Glenrose Rehabilitation Hospital in Edmonton for children struggling in school because of medical or neurological conditions. It was there that a psychiatrist offered a possible explanation for his seemingly sudden transformation and referred him to a pediatrician with expertise on PANDAS.

The condition was first put forth by American physician Dr. Susan Swedo, a researcher at the U.S. National Institute of Mental Health (NIMH), in a paper published in the American Journal of Psychiatry in 1998.

Swedo argued that PANDAS is a rare disorder that occurs when exposure to Group A strep – the bacteria responsible for common strep throat – triggers a misdirected immune response in children that results in inflammation in the brain.

To put it simply, instead of attacking the strep infection, the child’s antibodies attack a part of the brain known as the basal ganglia, which is responsible for emotion, behaviour, and motor function, according to the NIMH.

The resulting inflammation of the brain can lead to a wide array of symptoms including Obsessive Compulsive Disorder (OCD), anxiety, vocal or physical tics, personality changes, sensory sensitivities, restrictive eating, and a deterioration in school performance and handwriting ability, the institute explains.

According to Dr. Wendy Edwards, one of a handful of doctors in Canada who recognizes PANDAS and specializes in its treatment, the illness is characterized by two main features – its sudden onset and the appearance of either OCD and/or tics. The Chatham, Ont.-based pediatrician said the disorder can develop as quickly as within 24 hours or take as long as a week to emerge.

Because there is currently no diagnostic test or blood test to detect PANDAS, the NIMH explains that a diagnosis is dependent on the presence of several factors including OCD and/or tic symptoms, an abrupt and pediatric onset, symptoms that wane and wax in severity, and an association with a strep infection.

The U.S. non-profit organization called the PANDAS Network estimates that one in 200 children may have the illness; however, actual statistics on its prevalence are unknown because there is still reluctance in the medical community to acknowledge its existence.

When the hypothesis was first introduced it was groundbreaking and controversial, and now, even 20 years later, skeptics remain in the U.S. and in Canada about its legitimacy.

Following Swedo’s 1998 publication detailing the link between abrupt neurological behavioural changes and strep infections in children, a number of critics in the fields of neurology, psychiatry, infectious diseases, and pediatrics have questioned the NIMH’s research and whether strep bacteria can be definitively blamed for the varied symptoms attributed to PANDAS.

In Canada, Dr. Wendy Edwards said she’s in the minority of doctors who acknowledge the existence of PANDAS and treat patients for it accordingly.

“I would say the majority of people still don’t accept that this is a real thing. It’s not in the text books yet. Medicine is very slow about getting stuff into text books,” she explained. “There are a lot of great websites for physicians, there are wonderful research articles out there, it’s been published in legitimate medical journals, and yet, physicians are very slow to change their minds about things.”

The Canadian Paediatric Society (CPS), a national association representing more than 3,000 pediatricians, told CTVNews.ca that it currently doesn’t have a position on PANDAS because there are “many factors” that contribute to whether they have a position on a given topic, including “availability of evidence.”

“We also have a network of expert committees who identify priority topics for position statements, and as yet PANDAS has not been proposed,” Elizabeth Moreau, communications director for CPC, said in an emailed statement.

Dr. Daniel Flanders, a pediatrician and the owner of Kindercare Pediatrics in Toronto, said he is reserving judgment on whether he thinks the condition actually exists. He said he wouldn’t be surprised either way if it was conclusively proven or disproven by researchers in the near future.

“It’s sort of one of those things – and there are lots of these things in medicine – where the jury’s still out,” he said.

Flanders said it’s possible that parents are attributing two common conditions – OCD and/or tics and strep infections – to PANDAS when it may just be a coincidence they’re appearing in a child at the same time.

“A lot of kids have psychiatric symptoms and a lot of kids get strep,” he said. “It’s very, very plausible that both of those things are happening at the same time coincidentally and you can understand how a parent would connect those and assume that one is causing the other, but it’s not necessarily the case.”

According to Edwards, there is a wealth of research published in legitimate scientific journals in the past decade that demonstrate Swedo’s theory that a misdirected immune response that attacks the brain is responsible for sudden behavioural changes in children.

How is PANDAS treated?

Part of the debate surrounding PANDAS concerns how doctors would have to change how they diagnose and treat patients with neuropsychiatric symptoms, if the illness is more widely accepted.

Flanders said it would mean family physicians would be compelled to test for a strep infection every time a child comes in with an apparent abrupt onset of a psychiatric problem.

“That would be a lot of strep tests on a lot of kids who have sudden onset psychiatric symptoms for a disease that’s allegedly so rare,” he said. “It doesn’t make any sense.”

It would also mean that many more children would be prescribed antibiotics over a long-term period to kill the strep bacteria and protect against future infections – something some doctors are hesitant to do out of fear the patient will develop resistance to the drugs and it will negatively affect healthy gut bacteria.

According to the Edwards, the first line of treatment for PANDAS is antibiotics. Although she agreed there is a risk of a child developing a resistance to an antibiotic over a long period of time, she said the drugs she prescribes are more targeted. This way, if a child does develop a resistance to those antibiotics, there are other options available to them.

Edwards also said she insists her patients take regular probiotics while on the antibiotics to protect healthy gut bacteria.

Along with antibiotics, Edwards said she will offer psychological support for the symptoms of PANDAS, such as behavioural therapy. In extreme cases of separation anxiety or depression, she said a child may be prescribed psychiatric medication, such as antidepressants, to treat those symptoms in conjunction with antibiotics.

Additionally, there are more invasive treatments for severe cases such as intravenous immunoglobulin (IVIG) therapy where patients are given antibodies to help fight off infections.

Some doctors also prescribe plasmapheresis for PANDAS cases, which involves removing harmful antibodies from the blood plasma outside of the body and returning the plasma to the bloodstream after it has been treated.

Kerry Henrikson, the founder of the provincial non-profit organization PANDAS/PANS Ontario, said all three of her children have been diagnosed and treated for PANDAS by Edwards in the past five years. Like many other parents in Canada, she learned about the illness online from other families and struggled to find a doctor who would acknowledge PANDAS and treat it.

“It took me a year of seeing doctors across Ontario trying to find somebody who would even just test him [her son] for strep or try antibiotics,” she said.

In an effort to raise awareness and share information about PANDAS so that other families wouldn’t go through what she experienced, the Sarnia, Ont. mother founded PANDAS/PANS Ontario in June 2014.

The group established PANDAS/PANS Awareness Day for every Oct. 9 by contacting Henrikson’s local MPP Bob Bailey who successfully passed it into law in 2015. Since then, the organization has held different fundraisers for PANDAS on the date every year. The awareness day is also observed in Saskatchewan, Alberta, and B.C., and in more than 30 U.S. states, Henrikson said.

This October, Henrikson’s organization teamed up with Canadian Blood Services to host blood drives at various clinics across the country. They have also helped organize the world premiere of the Canadian documentary “Stolen Childhood” in Chatham, Ont. on Oct. 20.

PANDAS/PANS Ontario has also created an online petition calling on the Canadian Paediatric Society to educate its member physicians on the condition and its treatment. As of October, the petition has nearly 3,000 signatures – 2,000 short of its target of 5,000. The organization plans to send the petition to Marie Adele Davis, the executive director of CPS, once it reaches its goal.

Hope for the future

Edwards said she believes that PANDAS will be widely accepted eventually and that it will begin with the country’s tertiary care centres, such as hospitals, and medical schools.

It’s a promising prospect for Entrop’s now 12-year-old son Connor. In June, he was prescribed a three-week course of antibiotics and the effects were immediate, according to Entrop. He stopped pulling out his hair, he was less stressed, and he was smiling again.

Since then, Connor has been taking antibiotics three times a day and he appears to be back to his old self.

“It’s like I have my old kid back,” Entrop said. “He’s still Connor. He still has ADHD. He can still be a pain in the butt, but he’s healthy again.”

Despite his improvement, Entrop said she fears they’re not out of the woods yet.

“I’m terrified,” she said. “We have to be really cautious about not getting him exposed to strep and that’s scary because it’s hard to control that. A strep [infection] for him can result in a psychiatric illness and an episode for him.”