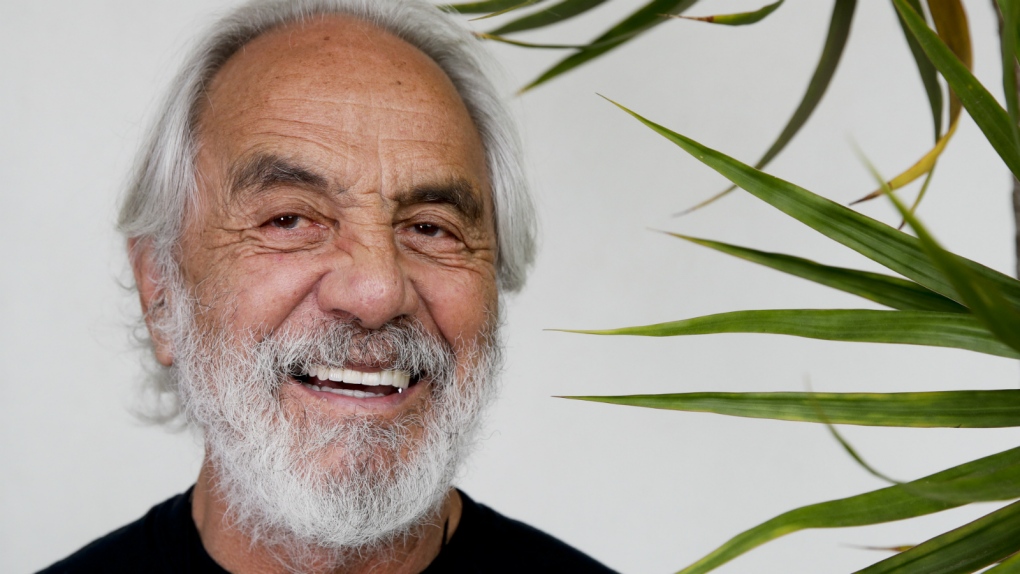 Tommy Chong pose for a picture at his home in Los Angeles on Tuesday, May 15, 2018. (AP Photo/Chris Carlson)

While some Canadians who use marijuana or work in the cannabis industry have been given a hard time at the U.S.-Canada border lately, the famed Edmonton-born stoner who lives in Los Angeles isn't worried.

"I've got the Cheech and Chong pass," the beloved comedy star of the "Cheech & Chong" drug-culture films, who is a marijuana advocate and has his own line of medicinal cannabis products, said during a recent visit to Toronto to shoot the upcoming "Air Farce New Year's Eve" comedy special.

"They see us coming: 'Oh my God, it's you, come over here.' I could be carrying a kilo, a ton of weed and they'd say, 'Go on through, no problem.' They know better, because I always have weed on me."

Chong, who was sentenced in 2003 to nine months in a U.S. jail for selling bongs, pointed to an incident at an airport in Michigan with his son last year.

"My son had a big jar of weed in his backpack, and so the TSA guy pulled him out of the line and searched him and found the weed and it was like a big deal, 'What's this?' kind of thing," Chong recalled in an interview.

His son told the TSA agent that it was his dad's medicinal marijuana.

"Long story short: the chief came down and looked at it and said, 'Yeah,' gave us back our weed and let us go," said Chong, who used cannabis as part of his treatment for prostate and colorectal cancers.

Chong was in Toronto last week to film a cameo as himself in CBC TV's "Air Farce New Year's Eve," which premieres Dec. 31.

"This show is great, they let me do what I want to do," Chong said. "I'm terrible with scripts, just terrible, because I can't see, I can't hear, I can't remember.

"That's why I only played one character in my career, because I'm not an actor. I'm just a Tommy Chong. I'm a comedian."

The special looks back on 2018 and celebrates the 45th anniversary of the acclaimed Air Farce comedy troupe that began in 1973 with Don Ferguson, Luba Goy, the late Roger Abbott, John Morgan, and Dave Broadfoot.

One of the topics covered in the special is Canada's legalization of recreational cannabis use in October, which pot activists like Chong have praised for helping remove stigmas surrounding weed use.

"I love it," he said, sitting on a couch in his dressing room wearing a Cheech and Chong T-shirt emblazoned with a marijuana leaf.

"I love that it's Canada that was first (to do it before the U.S.). See, God has a sense of humour: he gave us Trump and he legalized weed at the same time."

"Absolutely not, but that's the Canadian way," said the 80-year-old. "Like when they legalized alcohol, the government took control of the monopoly and you could only buy booze from the government, and the government is trying to do the same thing with pot.

"They want to make it so that they're the only supplier and it's not going to work that way. So what Canada has done now, legally, they've kept the underground market alive and vibrant, because people still go to their dealer to get the best weed and the quickest weed."

Chong said he's legally not allowed to bring his own cannabis company to Canada right now, nor is he allowed to do a celebrity endorsement of it here. He's waiting until the "dust settles" and figures that eventually he will launch Chong's Choice here.

"See, once marijuana becomes the economy of the world, all these third-world countries will quit the wars. They'll be too stoned to fight, basically."

Chong grew up in Calgary and became a pot enthusiast in 1957 when a bass player at a jazz club handed him a joint and a Lenny Bruce record.

"It changed my life," Chong said. "I dropped out of school right away, because I knew that everything I needed to learn was on the street. I was a musician and I just devoted my life to music."

Chong later got into improv comedy and rose to fame through the "Cheech & Chong" albums and movies, which followed the hazy, hippie adventures of him and Richard (Cheech) Marin, whom he met in Vancouver.

With cannabis on the minds of many these days, could there be another "Cheech & Chong" film on the horizon?

"No, to be honest with you," Chong said. "There have been a few attempts lately and there's one attempt at a documentary and it's still in the works.