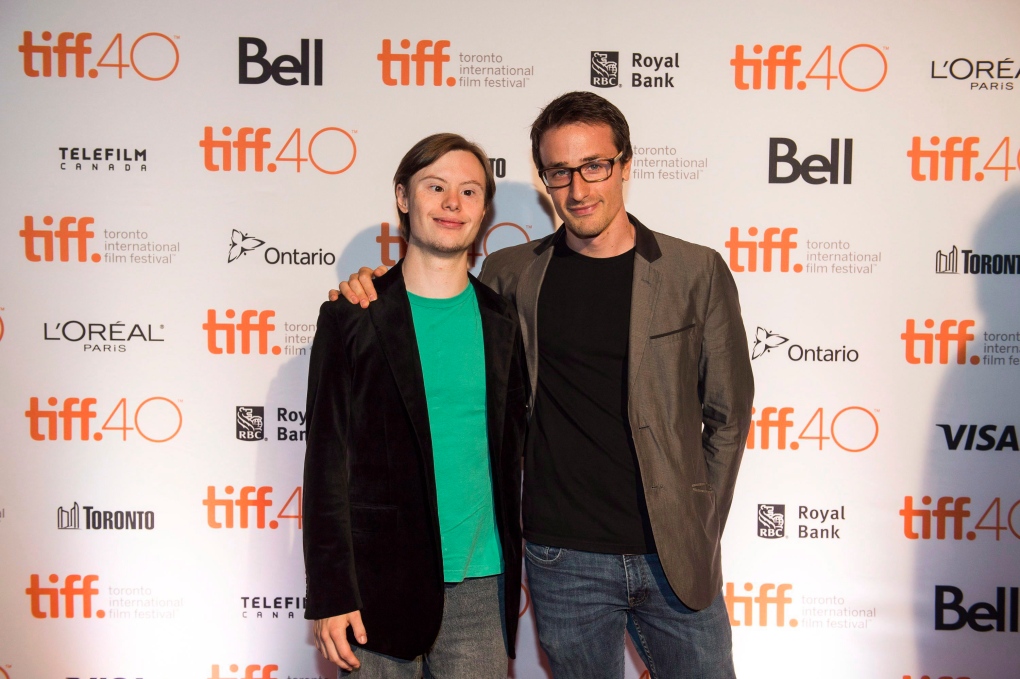 Actor Dylan Harman, left, and Director Kire Paputts of the film 'The Rainbow Kid,' stand for a photo on the red carpet during the Toronto International Film Festival press conference announcing the 2015 Canadian features and shorts lineup in Toronto on Wednesday, August 5, 2015. THE CANADIAN PRESS/Aaron Vincent Elkaim

TORONTO -- When it comes to grabbing attention during the bustle of the Toronto International Film Festival, short films often wind up being pushed aside.

This year, 110 shorts will screen at TIFF. But they're typically overshadowed by celebrity-driven Hollywood fare and independent films chasing awards buzz.

Shorts are the less-sexy part of the film industry, but for directors, creating a short version of their big idea can be a crucial step in making a feature film.

"A short is almost like a calling card," said Kire Paputts, director of "The Rainbow Kid," a full-length feature at this year's festival that began as a 20-minute short.

"You have to prove yourself before people will believe in you."

Short films have long been a way for young directors to learn their craft and navigate the hurdles of the film industry with very little money on the line.

Before Ryan Gosling was nominated for an Oscar in the lead role of "Half Nelson," the film was a 19-minute short made for $800 with a cast of unknowns. "Whiplash," which took audiences by storm at the Toronto film festival last year, got its start as an 18-minute condensed version of the movie.

Some directors have even used shorts as a rough draft, including Neill Blomkamp, who made the six-minute short "Alive in Joburg" before scaling it up into the blockbuster hit "District 9."

While "The Rainbow Kid" isn't technically complex, Paputts said directing the independent film had its own set of potential complications, which he ironed out by making a shorter version.

The story follows a teenager with Down syndrome who is on a quest to find the end of a rainbow. In "Rainbow Connection," the original short, Paputts said he learned the rhythms of actor Dylan Harman, who has Down syndrome in real life.

"I'd never worked with anyone who has special needs before," Paputts said.

"I felt, before I jump into a feature film ... I should probably test the waters a bit to see what to expect."

Making the short not only gave Paputts a solid idea of how his actor worked, but ultimately helped him deliver a better performance, he said.

"But it didn't open any doors in terms of getting further money for the feature," he added. "It was kind of like I had to start from scratch again."

Other filmmakers have successfully used short films to attract enough money to pay for their feature.

The Turkish horror film "Baskin" might have never made it to the big screen if it weren't for the 10-minute version that preceded it two years ago, said its director Can Evrenol.

He spent years trying to get a feature film off the ground before he decided to take a different approach. Tapping into his film school roots, he wrote a script for a single scene of a larger storyline.

"I consider myself more of a short film script writer," he said. "I like creating an atmosphere and then just blitzkrieging it."

The short film, also called "Baskin," caught the attention of "Hostel" director Eli Roth. The endorsement helped drum up enough attention for Evrenol to fund his feature-length film, which was selected for the Midnight Madness section of the Toronto film festival.

Canadian independent feature "Sleeping Giant," another film on this year's TIFF slate, rose from the ashes of a financial disaster a few years ago.

Director Andrew Cividino was weeks away from production on a full-length version of the film when his funding fell through, leaving him stranded with no backup plan.

Instead of abandoning the project, Cividino worked with his producer to extract some scenes from the script and turn them into a short film. That version was shown at last year's TIFF and won a short film prize from another festival.

Widespread acclaim for the short helped the filmmakers scrape together enough money to rescue their original feature film.

Those financial hurdles are familiar to Toronto-based director Vincenzo Natali, who struggled to find enough money to bring "Cube" to the screen in the late 1990s.

Frustrated with the lack of financial interest, he decided to make "Elevated," a short horror film that unravels inside an elevator.

"It was a way of working out some of the things that I had wanted to do in 'Cube,"' he said.

Ultimately, the Canadian Film Centre helped push "Cube" into production for a 1997 release. It became a cult hit at the box-office and spawned two sequels.

"Every second has to count."