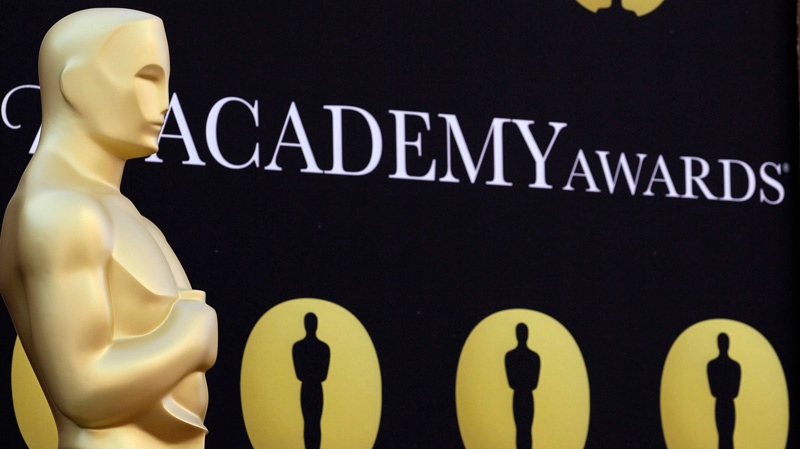 In this March 5, 2010 file photo, an Oscar statue stands on the red carpet outside the Kodak Theatre for the 82nd Academy Awards in Los Angeles, Calif. (AP / Amy Sancetta, file)

VANCOUVER -- Two software developers from Canada are among the first Academy Award winners of the year.

The quartet is being honoured for developing the Wavelet Turbulence software, a digital tool that makes it easier for visual effects artists to control the appearance of gas and smoke on film.

The German-born Thuerey says it's been used in more than 20 big Hollywood productions, including "Monsters vs Aliens" and "Battleship."

Thuerey's Canadian connections are admittedly slight -- he came here in June to work at the visual effects agency ScanlineVFX in Vancouver.

While there, he says he's using his ground-breaking tool on upcoming projects including "Iron Man 3" and the Superman reboot "Man of Steel."

He's among 25 recipients of academy plaques and certificates recognizing technical movie-making achievements. A ceremony in their honour will be held Feb. 9 in Los Angeles.

Portions of the Scientific and Technical Awards presentations will be included in the Feb. 24 Oscar ceremony.

Thuerey says he developed the software in 2008 when he was a researcher at the Swiss university ETH Zurich and Gross was his supervisor.

It began when Thuerey met Kim, a researcher at Cornell University, at a conference the year before in Vienna. James was Kim's supervisor.

"We didn't really expect it to be that successful at the time," says Thuerey.

"We really liked the idea and it worked surprisingly well but the immediate goal was just to get a publication at Siggraph, which is a big computer graphics conference."

That conference was well attended by industry and got the attention of a friend at DreamWorks who put it to use on "Monsters vs. Aliens" in 2009.

Since then it's become the industry standard, says Thuerey.

"These effects take a long time to compute and our process makes it more controllable for the artist and much faster to use," he explains.

"It's a very simple thing in nature usually but it can develop very complicated motions."