Movie reviews: 'The Irishman' is a finale to gangster films Scorsese has told for years 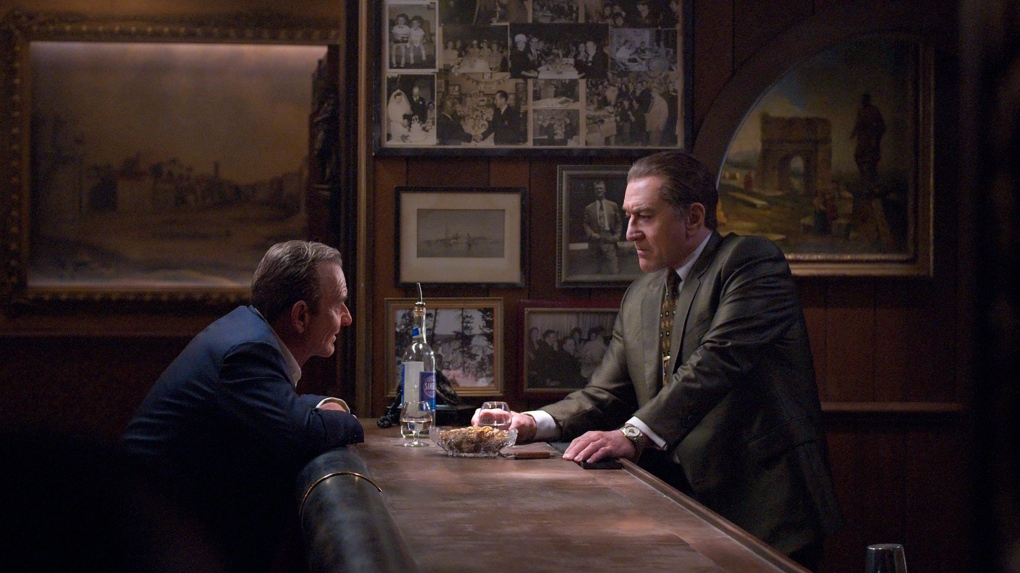 This image released by Netflix shows Joe Pesci, left, and Robert De Niro in a scene from 'The Irishman.' (Niko Tavernise/Netflix via AP)

"The Irishman," starring septuagenarian powerhouses Robert De Niro, Joe Pesci and Al Pacino, is based on "I Heard You Paint Houses," Charles Brandt's book about a man who claims to have offed mobster "Crazy" Joe Gallo and Teamster Jimmy Hoffa. It's familiar territory for the trio of stars, all of whom have made a career out of playing wise guys, and for director Martin Scorsese, but it feels different. The heady, rambunctious filmmaking of "Goodfellas" and "Casino" is gone, replaced by the richly, contemplative tone of a man at the end of his life wondering if he did the right thing.

De Niro is Frank "The Irishman" Sheeran, an 82-year-old Second World War veteran, truck driver, union leader and hitman. He developed his deadly skills as a combat veteran in Italy, talents he put to use as an associate of Russell Bufalino (Joe Pesci), the head of a notorious crime family.

Now wheelchair bound in a retirement home, Frank recounts, in flashback, how he rose from smuggler to hitman to Bufalino's inner circle. "It was like the army," he says. "You followed orders." It's a wild story that reads like it was torn out of the pages of a colourful 20th century history book. In Frank's tale, crime and politics are bedmates, bound together by power struggles between the underworld and Washington, involvement in elections and even the Bay of Pigs fiasco.

Frank's rise is accelerated when Bufalino gives him the job of overseeing Teamster leader Jimmy Hoffa (Pacino). Hoffa ushers Frank through the corridors of power and becomes a family friend but when the Teamster's actions threaten to expose his mafia co-conspirators, Frank is pressed to choose between his loyalty to Hoffa and Bufalino.

Much has been written about "The Irishman's" three-and-a-half-hour running time and hocus pocus that de-ages the leads, allowing them to play their characters from cradle to grave. But don't buy into the distractions. Scorsese wrestles the story and technology into shape, making a film that plays like a requiem for the kind of characters that made him famous. Unlike the cocky "Goodfellas," which is all about the rush, "The Irishman" is ripe with themes of loss and legacy, regret and mortality. It's about the consequences of the life Frank chose for himself and is a devastating portrait of a forgotten man who did terrible things out of a sense of duty.

Led by the trio of marquee actors, the cast is uniformly fine. Anna Paquin as Frank's daughter takes a role made up of sideways glances and terse dialogue and turns it into a damning condemnation of Frank's work. She conveys depths with just a turn of her head. Bobby Cannavale as the colourfully named Felix "Skinny Razor" DiTullio and Ray Romano as a mob lawyer add interesting hues to an already colourful story.

The holy trinity, De Niro, Pesci and Pacino, hand in late career work that feels like the culmination of a lifetime of character studies. This is an examination of men who live by a brutal code that leaves little wiggle room for mistakes and disrespect but each actor finds ways to humanize their characters. Rich in detail, these actors riff off one another, finding internal rhythms in the repetitious way they speak to one another.

Pesci lets go of his famous "Like I'm a clown? I amuse you?" film persona to present understated work that is equal parts loyalty and menace. Pacino plays an over-the-top character with an unhinged gusto that breathes life into someone who is now a name from the history books but was once, as is said in the film, as popular as Elvis with the working man.

Strong work abounds but De Niro has the resonate moments. The look on his face as (MILD SPOILER ALERT) he makes the grim trip to Detroit to kill his friend is stoic but pained. Placed in an unthinkable position, you can sense the wheels turning in his head. He fuels a remarkably tense 30 minute lead up to a senseless act of violence that will have you leaning forward in your seat.

It's in the film's elegiac final moments that De Niro brings all of Franks humanity to the fore. "You don't know how fast it goes until you get there," he says. It's a quiet, unhurried analysis of a man's final days as he looks back. That erases the memory of De Niro in movies like "Dirty Grandpa," reminding us why he was thought of as the best actor of his generation.

"The Irishman" is an event, a movie that feels like the obvious conclusion to the gangster stories the director and cast have been telling for decades.

The last time we saw Danny Torrance, son of Jack and Wendy Torrance by way of Stephen King, he was a young boy who had trapped his father in a deadly maze outside The Overlook Hotel. In Stanley Kubrick's film "The Shining," little Danny has psychic powers known as the "shining." A new film, "Doctor Sleep," brings us up to date on Danny's later life and the effects of family trauma.

Now going by the more adult name Dan (Ewan McGregor), Torrance is still haunted by the events of his youth. Alcoholic and unhappy, he pursues peace by working in a hospice, using his unique power to comfort the dying. His patients call him Doctor Sleep and soon his work, along with the help of AA, help him overcome his torment. His tranquility is undone when he meets psychic teenager Abra Stone (Kyliegh Curran). "You're magic," Abra says, "like me." "I don't know about magic," Dan replies. "I always called it ‘the shining.'"

Abra's abilities have caught the attention of the True Knot, a tribe of demonic psychics led by Rose the Hat (Rebecca Ferguson), an almost-immortal being who feeds off children's telepathic abilities to prolong her own life. "They eat screams and drink pain," says Dan's mentor-in-shining Dick Hallorann (Carl Lumbly). To battle Rose and her evil minions, Danny must face his greatest fear, returning to the psychological horrors of the Overlook Hotel.

The spirit of Stanley Kubrick's "The Shining" hangs heavy over "Doctor Sleep"—visual homages and callbacks abound—but where the 1980 film is an exercise in icy exterior thrills the new one, directed by Mike "Oculus" Flanagan, brings a thaw to the action. He has opened up the action and the characters. Kubrick created claustrophobia by setting the action mostly in the closed off rooms and hallways of the Overlook Hotel while Flanagan, who also wrote the script, lets the characters roam free, exploring the world around them and the inner workings of their extra special psyches. It makes for a much different feeling film that contains similar amounts of suspense—although it must be said, not nearly the same level of outright fear—but an added dose of emotional resonance and friendship.

McGregor is never quite as compelling as Jack Nicholson in the original film but the supporting characters pick up much of the slack. As Abra, Curran is the most compelling character on screen. Fearless and resilient, she has an open heart and it is her friendship with Torrance that brings his lifelong journey for peace to a head. In one nicely rendered scene, Dan speaks through her in a moment ripe with danger. Curran embodies the character and it is eerie to see the 13 year old take on the weight of her adult counterpart.

Ferguson plays Rose the Hat as a bohemian villain. Callous and cruel, she brings a much-needed sense of unpredictability and danger to a story that isn't particularly scary. It's atmospheric and the character work brings us in, but it likely won't haunt your dreams with the exception of one scene.

(MILD SPOILER ALERT) The True Knot believe that pain purifies the "steam," the essence of their victims, which leads to a very unpleasant scene involving the demise of Jacob Tremblay as a young baseball player. You either remember him as the vulnerable child in "Room" or the foul-mouthed star of "Good Boys," but this grim scene will give you new, nasty memories of his work.

"Doctor Sleep" often feels like a tribute to "The Shining" but brings enough of its own ideas on the effects of childhood trauma and the lingering pain of a shattered family to add richness and originality to the movie.

Released on a week following out of control wildfires in California, comes "Playing with Fire." But this isn't a ripped-from-the-headlines story of first responders risking their lives. Instead, it's a kid's comedy about "smoke jumpers" who are transformed by the very people they are there to protect.

Wrestler-turned-actor John Cena is Supt. Jake Carson, a second-generation smoke jumper and a by the book guy. "We must be at our very best every second of every day," he says. His team, the former accountant Mark (Keegan-Michael Key), motor mouth Rodrigo (John Leguizamo) and the intimidating Axe (Tyler Mane), are an eccentric but loyal bunch, willing to put their lives on the line to fight fires and save lives.

On one spectacular mission Jake is lowered into a burning cabin on a remote mountain, rescuing three kids, teenager Brynn (Brianna Hildebrand), high-spirited tyke Will (Christian Convery) and babe-in-arms Zoey (Finley Rose Slater). Their parents are on vacation and, as employees of the U.S. Forest Service, Jake, Mark, Rodrigo and Axe are legally bound by the Safe Haven Law to look after the kids until they can be handed over to their guardians.

It's not a natural fit. The kids arrive just as Jake is nominated for the department's top job. As he tries to keep the station in tip-top shape in advance of his boss, Cmdr. Richards' (Dennis Haysbert) arrival and awkwardly court a local scientist (Judy Greer), the rambunctious children turn his life upside down.

"Playing with Fire" isn't "Backdraft" for kids. There are some fiery action scenes but kid friendly awkward humour is the name of the game here. There are pratfalls, physical gags, poop and barf jokes, but Cena's goofy charm plus Key, Leguizamo and Mane's strange exuberance distract from the movie's predictable plot. Yes, it's one of those stories where the tough guys reveal hidden reservoirs of tenderness and learn as much from the kids as the kids learn from them, but there are enough genuine laughs, for kids and adults, amid the silly stuff to warrant the price of a Saturday afternoon matinee ticket.