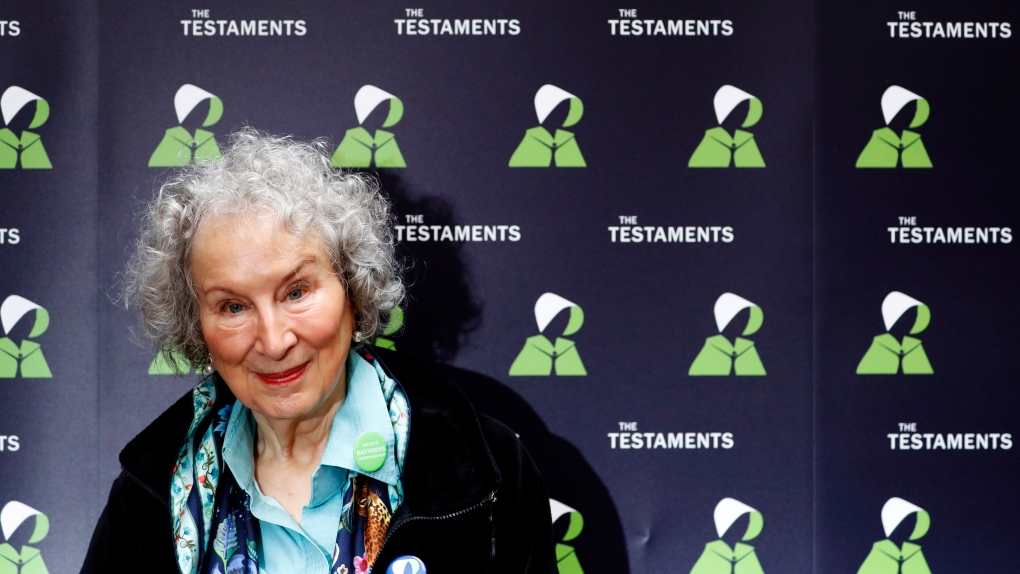 Canadian author Margaret Atwood poses for a photograph during a press conference at the British Library to launch her new book 'The Testaments' in London, Tuesday, Sept. 10, 2019. (AP Photo/Alastair Grant)

CINCINNATI -- Author Margaret Atwood thinks an American defiant streak is the country's defence against the kind of nightmarish totalitarian future she depicts for the United States in "The Handmaid's Tale."

"I would bet on American orneriness and refusal to line up," she told The Associated Press. "So I don't think you're going to get people marching in lockstep easily. ... You could get it, but it would be hard."

She illustrated with a joke about the difference between her fellow Canadians and Americans:

"How do you get 100 Canadians out of a swimming pool.?" she said; pausing for the response "How?"

"OK, you Canadians, out of the swimming pool!"

Atwood -- a prolific writer of poetry, fiction, nonfiction, essays, comic books and, as of late, tweets -- in recent years has drawn a new round of acclaim for her bestselling 1985 novel of a dystopian future in which women are subjugated after an overthrow of the U.S. government.

Some readers of "The Handmaid's Tale" saw in the leaders of authoritarian Gilead similarities to the rise of Republican Donald Trump to president in the 2016 election. The television adaptation on Hulu starring Elisabeth Moss generated yet more commentary, and women dressed in red cloaks and white bonnets, as the handmaids were depicted in the book and TV series, have shown up at political demonstrations.

Atwood said sales have gone up around earlier elections, but they "really went up" after the 2016 election and then they "really, really went up" when the Hulu series launched in 2017. The series has been a popular and critical success.

"Lucky for me, it's well done," said Atwood, who did a brief cameo in which she delivered a slap to Moss' Offred character. "I'm quite aware of where it could have gone off the trolley tracks quite badly."

"Margaret Atwood continues to remind us that `It can't happen here' cannot be depended upon; anything can happen anywhere given the right circumstances, and right now, with scorn for democratic institutions on the rise, her lessons are more vital than ever," Rab wrote in an email.

While not all books are conducive to peace and understanding, Atwood said, fiction can help people "learn what it is to be a person different from ourselves, so that might cause you to have more empathy with people who aren't exactly like you."

The Toronto resident's longtime partner, novelist Graeme Gibson, died at age 85 a year ago this month. Atwood, 80, said she tried to keep herself busily distracted after the loss, doing book promotions and other travel until the pandemic grounded her in March. She has since signed thousands of inserts and bookplates to support independent booksellers, and has given talks via Zoom.

She considers herself "a realist, but on the optimistic side, because if you're pessimistic, you don't do anything. ... I think it's people who are realistic but inclined towards optimism who actually try to change direction."

Atwood also thinks people are "alert to the dangers" of undermining the U.S. constitution.

"That is what stands between you and an absolutist dictatorship," she said.

The awards gathering originally planned for October is being rescheduled for spring 2021 because of pandemic precautions. Atwood will be joined by the 2020 winners of awards for fiction and nonfiction; finalists for those will be announced next month.