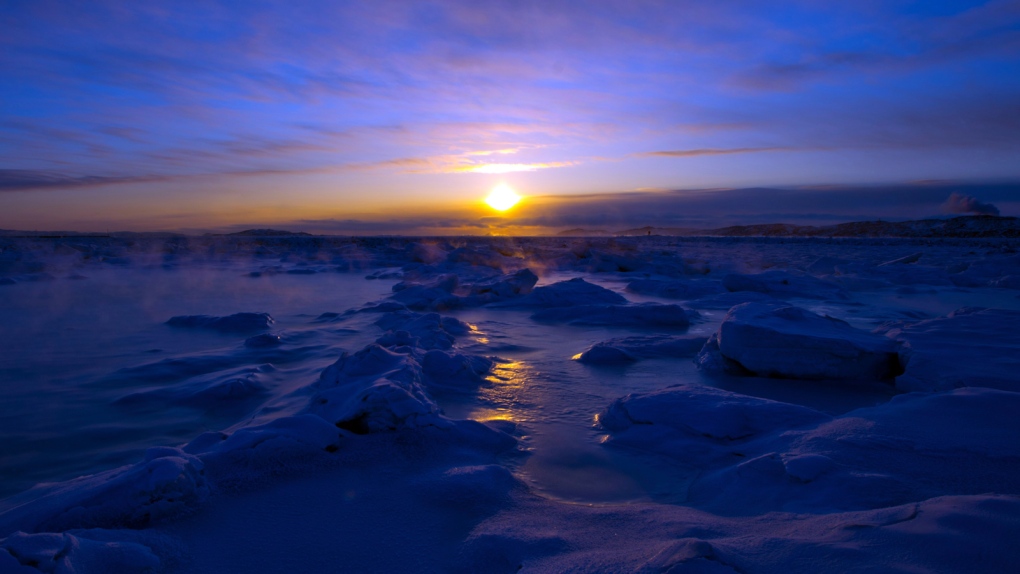 Water evaporates from Frobisher Bay as the sun sets in Iqaluit, Nunavut on Tuesday, December 9, 2014. (Sean Kilpatrick / THE CANADIAN PRESS)

IQALUIT, Nunavut -- Nine-year-old Alexis Vincent-Wolfe learned the ancient Inuit art of throat-singing from her grandmother, but there's no telling what grandma would make of what Alexis is doing now.

"I never told her yet," said the student at Iqaluit's Nakasuk School, adding a mischievous giggle.

Students at Nakasuk's throat-singing club have been working with southern experts to remix the chants, grunts, hums and breaths of the traditional art with the latest technology. The result is a mesmerizing mix of primordial and funky.

"They're looping their voices and they're learning how to become artistic and creative in a new and interesting way," said Nelson Tagoona, 21, from Baker Lake, Nunavut, who combines throat-singing and beat-boxing in his own music and who led the Nakasuk sessions.

"It is so interesting using technology to make little changes to throat songs, looping throat songs and creating layers."

The project originated last year when teacher Elizabeth Ryan was doing her practicum at the school. Walking around the playground, she noticed little girls teaching each other to throat sing.

Girls as young as six were standing face to face, holding each other's elbows in the traditional way, and working out the intricacies of songs their great-grandmothers sang by the light of seal-oil lamps.

"I heard it from my friends and I started practising and I thought it was super-cool," said Talia Armstrong, 10, who started at age four.

Ryan, a throat-singer herself, sensed this was something to build on.

"I wondered, is there a place where these girls can go throat-sing together and learn more songs and come together and practise?"

Now back at Nakasuk as a full-time staffer, Ryan started a throat-singing club that has up to 45 members -- mostly girls, since it's traditionally a female practice, but a few boys as well. Ryan has figured out a way to teach the technique.

Enter Actua, an Ottawa-based charity that promotes science and technology education. Largely funded by Google, Actua has been running workshops and programs called Codemakers across the North to get kids working with computers.

"What we want to do is give them the skills and exposure to computer science and them let them be the creators of the final product," said Actua head Jennifer Flanagan.

Actua instructors visited the throat-singing club and worked with members and other Nakasuk students to show them how to use a simple computer program to record their songs, chop them up, recombine them, add bits from their friends' songs and blend different elements together.

"The throat-singing activity is a perfect example of what we're trying to do with Codemakers more broadly, which is getting kids engaged in computer science in a way that's relevant to them and in a way that's culturally and community based."

In a territory with Canada's worst school attendance, it helps to keep kids engaged, too, said Nakasuk principal Tracey MacMillan.

"Anything we can do to promote students' attachment to school is a good thing," she said.

There was plenty of engagement as students remixed their own songs, said Tagoonao. "Their faces, their eyes, just ignite."

Music offers a healthy form of self-expression to a group facing more than their share of social problems, said Tagoona. This kind of project could be done even in the smallest communities that offer little else.

And bringing ancient cultural forms into the digital age is one way to keep them relevant.

"I'm a little worried about the culture fading away," he said. "I want to preserve the knowledge as much as possible and this is a very interesting way."