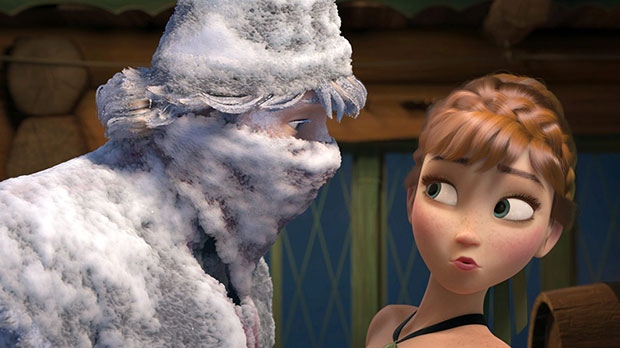 Kristoff, voiced by Jonathan Groff, left, and Anna, voiced by Kristen Bell, in a scene from Walt Disney Pictures' 'Frozen'

(LOS ANGELES-AFP) - A critical and commercial success, "Frozen" marks a second renaissance for Walt Disney's legendary film studio -- and is widely tipped to win its first ever Oscar for best animated feature next weekend.

The movie, which has made nearly $1 billion, is the culmination of a revival driven by fierce competition and the studio's purchase of rival Pixar in 2006, bringing boss John Lasseter into the Disney fold.

If the movie does win at next Sunday's 86th Academy Awards, it will be Disney's first best animated feature Oscar since the category was created in 2001.

Disney has come a long way since the turn of the millenium, when the studio had been sidelined by Pixar and its string of blockbuster hits from "Toy Story" and "Cars" to "Finding Nemo," Ratatouille" and "Up."

"Just like 'Great Mouse Detective' was a step up from the nadir of 'Black Cauldron,' so 'Princess and the Frog' was more successful than the earlier films like 'Home on the Range' and 'Meet the Robinsons'," said Tom Sito, professor of cinema at the University of Southern California (USC).

Ironically, the Prince Charming of this latest rebirth had been the studio's main rival: Lasseter, co-founder of Pixar, who was named Disney's animated creative director after his company became part of Mickey's empire eight years ago.

"Since the merger with Pixar in 2006, Disney Animation is once more under the direct guidance of an animator, John Lasseter. This had not been the case since the death of Walt Disney in 1966," Sito, a former Disney animator, told AFP.

The "Toy Story" and "Cars" creator "brought in a lot of new talent to the storytelling departments: clever young writers and directors ... We also (saw) a return to the movie-musical format after a 20-year hiatus, which for Disney has always been a specialty," he added.

Music is at the heart of "Frozen": the movie's keynote tune "Let It Go" is a frontrunner to win the best song Oscar next weekend.

Peter Del Vecho, producer on the film, said Lasseter "changed the culture at Disney Animation. We're a different studio than Pixar, but a lot of the same ideas that he learned there, he imported to us.

"The main thing he imported was that we as filmmakers have to take ownership of our product. John sets a very high bar in terms of story, in terms of research, and you always want to hit that bar," he told AFP.

But the studio's culture is also highly collaborative, with directors and screenwriters on projects able to voice their opinions about others' films after in-house development screenings.

"The best idea wins, you're encouraged to make mistakes and to take risks," said Del Vecho.

"We're responsible for each other's films, meaning that I went to 'Tangled' screenings, I went to 'Wreck-it Ralph' screenings and gave notes just as filmmakers and writers on other projects come and give us notes. Our movie couldn't have evolved without that kind of open collaborative environment."

The other factor driving Disney's renaissance has been increasingly tough competition from rivals like Blue Sky ("Ice Age," "Rio"), DreamWorks Animation ("Shrek," "Kung-Fu Panda," "Madagascar") and Illumination, which makes the "Despicable Me" films -- the second of which is also nominated next Sunday.

"A rising tide raises all boats. It is very important for the art of animation to have competitors at other studios," said Sito. "Walt Disney did some of his best work while fighting off challenges from Max Fleischer and Looney Tunes.

"When (Disney) was alone in the 1960s and 70s feature business, an outdated repetitive aesthetic caused their films to grow stale, despite the quality of their technique," he added.

"The success of 'The Lego Movie' and 'Despicable Me' creates a wonderful climate for new ideas in animation."