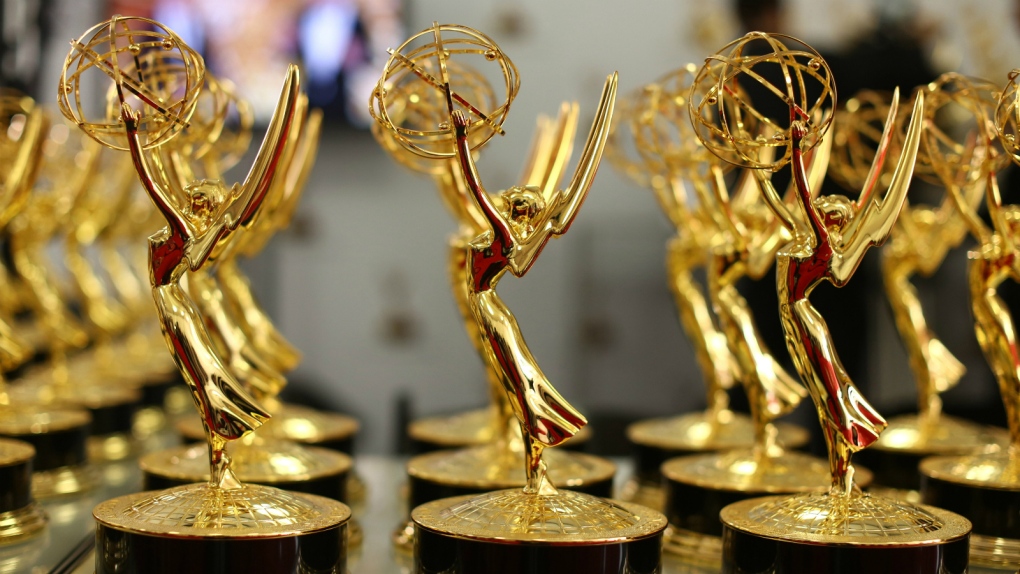 A general view at the trophy table at the 65th Primetime Emmy Awards held at Nokia Theatre, in Los Angeles are shown in this photo provided by the Academy of Television Arts and Sciences on Sept. 22, 2013.

In the Way Too Much TV Era, it truly is an honour just to be nominated.

Imagine that you're working on a television series, one of the many actors, writers and others who give daily thanks for the rise of cable and streaming that has led to gazillions -- at least -- of shows and growing employment opportunities. Then, besides the possibility of at least your mom spotting you in the vast video sea, you learn that your peers watched and, hallelujah, decreed you Emmy worthy.

Who needs to win? Every nominee, of course, who would prefer to avoid being an also-ran smiling bravely for the cameras. There's also the producers of the Sept. 22 Emmy Awards ceremony and Fox, the network airing it, with an event to sell.

"Game of Thrones," "Veep" and "When They See Us" look like front-runners but the outcome is anyone's guess. AP Television Writer Lynn Elber and Entertainment Writer Mark Kennedy's offer theirs in the top categories.

Should win: "Pose." An opulent, clear-eyed embrace of the late-20th-century LGBTQ ballroom scene deserves its due.

Will win: "Game of Thrones." A landmark show that brought cinematic sweep to TV gets a big farewell, finale naysayers be damned.

Should win: Agreed on "Pose," a loving look at a world that has never been celebrated on TV before, starring the largest LGBTQ cast ever for a scripted series.

Will win: "Pose" is up against the behemoth "Game of Thrones," which triggered parodies and homages, memes and talk show publicity. Even the president tried to co-opt its tagline "Winter Is Coming." The Emmy is coming.

Should win: "Fleabag." Such shocking sexual abandon and emotional dysfunction is downright un-American. Three cheers for this British invasion!

Will win: "Veep." A three-for-three winner won't be defeated in its last hurrah, especially when politics are all the rage.

Should win: The second season of "Fleabag" -- with a woman resisting her feelings for a priest -- and the debut of "Russian Doll" -- in which a New Yorker keeps reliving the night of her 36th birthday -- were deeply worthy of wins for writing and originality.

Will win: "Veep," the safe and more popular choice. But Emmy voters may learn to regret this predictable decision.

Will win: Billy Porter. He found the TV role he deserved and gets the award he earned.

Should win: Yes, yes, yes. Porter is always the best thing in whatever he's in and he's truly fierce in "Pose." But did enough people watch?

Will win: Kit Harington, buffeted by the waves of "Game of Thrones" nostalgia, will give a knightly farewell to Jon Snow with a statuette.

Should win: Sandra Oh, "Killing Eve." A tour-de-force performance of vulnerability and, to her character's dismay, brutality.

Will win: Sandra Oh. Deserved, history-making recognition as she becomes the first actress of Asian descent to win a lead actress trophy. Also makes up for her five "Grey's Anatomy" supporting nods without wins.

Should win: The mouse to Sandra Oh's cat -- Jodie Comer. She has, criminally, not earned enough recognition for her special brand of killer.

Will win: Sandra Oh. Especially since there's no Claire Foy from "The Crown" to ruin her night.

Should win: The mouse to Sandra Oh's cat -- Jodie Comer. She has, criminally, not earned enough recognition for her special brand of killer.

Will win: Sandra Oh. Especially since there's no Claire Foy from "The Crown" to ruin her night.

Should win: Bill Hader, "Barry." His scarily winning portrayal of a hit man with a Hollywood dream was voted tops last year and remains deserving.

Should win: Hader already has his Emmy. Douglas won a Golden Globe for "The Kominsky Method." The Emmy should go to Anthony Anderson, the beating heart of "black-ish," who makes lovingly exasperated completely hysterical but has been overlooked too long.

Will win: The award clearly will go to Eugene Levy, who is a comedic treasure and rightfully should be showered with awards. His last Emmy was in 1983. It's time, people.

Should win: Catherine O'Hara, "Schitt's Creek." Consider it a lifetime achievement award, with her delectably self-absorbed, absurd Moira topping her inventive catalogue of characters (and yes, I'm including the Christopher Guest films. Movies, TV -- it's all the same now).

Will win: Julia Louis-Dreyfus, "Veep." The queen of TV comedy ("Seinfeld," "The New Adventures of Old Christine," this) will add a record-setting ninth Emmy to her haul, breaking a tie with Cloris Leachman for most-honoured performer ever.

Should win: Phoebe Waller-Bridge, who in "Fleabag" needs only to look over her shoulder at us, lower her eyes and convey everything that's churning in her complex mind.

Will win: Julia Louis-Dreyfus. Who is silly enough to vote against her?

Should win: "When They See Us." The superb cast, the unsparing writing, the dismaying currency of a 20-year-old case's implications for American justice and racial inequality demand an Emmy.

Will win: "When They See Us." "Chornobyl" is a deeply worthy competitor, but Emmy voters put domestic concerns first.

Should win: In many ways, this category represented the best of TV this season -- "Chornobyl," "Escape at Dannemora," "Fosse/Verdon," "When They See Us" and "Sharp Objects." Any is a worthy winner.

Will win: "When They See Us," perhaps the best of this exciting category. It had searing acting, harrowing circumstances and brilliant writing.