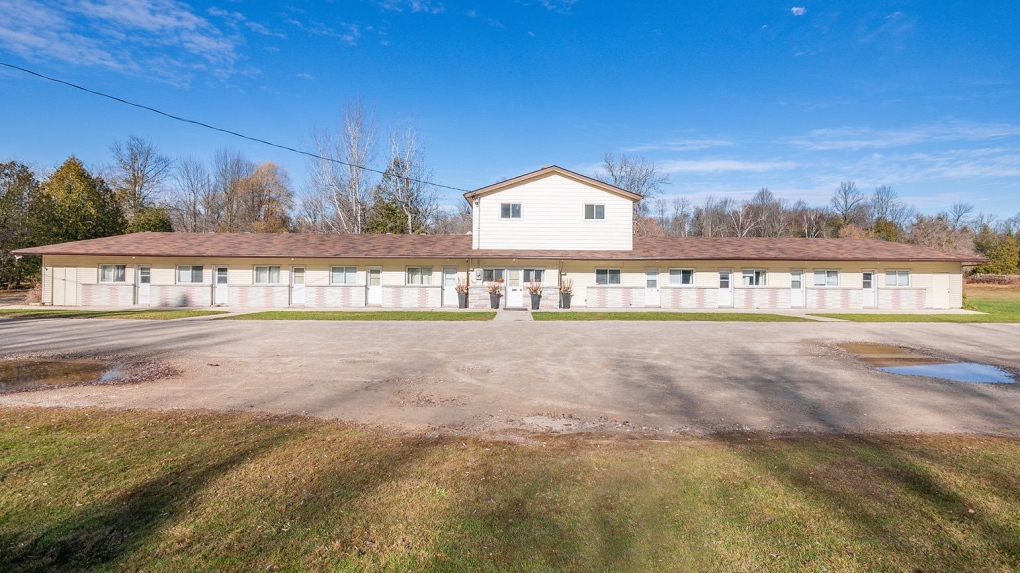 The exterior of the motel, located in Hockley Valley, Ont., was used in the show "Schitt's Creek." (Colliers International)

TORONTO -- After serving as the home for the riches-to-rags fictional Rose family in the Canadian hit TV series “Schitt’s Creek” for six seasons, the Rosebud Motel is up for sale.

The property, which is called the Hockley Motel in real life, is located approximately 87 kilometres northwest of Toronto in Hockley Valley, Ont.

According to the $2-million listing, the beloved motel features 10 units, including a two-storey manager’s suite. There is also a one-bedroom cottage, outdoor fire pit, picnic tables, and a surface parking lot on the 6.5-acre property.

The listing also boasts of an active river at the back of the site, the Nottawasaga River, which is “a highly desirable fishing river for Rainbow Trout and Salmon.”

While Johnny Rose and Stevie Budd were able to book guests in the motel on the television show, the listing says the property is “currently not operational.” However, it states the new owner will have the “ability to create something special on the site.”

The realtor suggested the new owner of the motel embrace “new travel trends following COVID-19,” such as contactless check-in and other mobile applications to “enhance the overall guest experience in a more personalized yet safe way.”

The listing also said the property is an “ideal setting” for television and movie production or could be renovated and repositioned as a “lodging operation, boutique property or long-term rental for families.”

Although the property is perhaps best known as the setting for the Emmy Award-winning show, it has also been used as a filming location for other productions, including the 2005 film “A History of Violence,” the miniseries “11.22.63,” and the Netflix series “The Umbrella Academy.”

In September, Jesse Tipping, the motel’s current owner and the president of the Athlete Institute Basketball Academy and Orangeville Prep, told CTVNews.ca he originally bought the motel in 2011 to house Canadian basketball recruits.

That’s why Jamal Murray, a Denver Nuggets player, and Miami Heat’s Kyle Alexander spent time at the motel before it became the home of the Roses.

As a long-time fan of the show himself, Tipping said he hopes the next owner will turn it into a “Schitt’s Creek”-themed motel in tribute to the show.

“The property itself is so beautiful. It’s very pretty and it's an incredible spot and the motel itself has had a great history in the community and I hope that somebody who buys it honours that history is able to keep it going,” he said.

Until that time, however, fans of “Schitt’s Creek” will have to bid the motel farewell… or as the characters David Rose and Stevie Budd would say: “Best wishes, warmest regards.”

Hockley Motel, Mono, ON from Colliers Hotels on Vimeo.