What we know so far about the Toronto van attack:

Just before 1:30 p.m. ET Monday, a van mounted the sidewalk on Toronto’s Yonge St., just south of Finch Ave. The van, belonging to the rental company Ryder, continued southbound until just south of Sheppard Ave., a stretch of just over two kilometres.

10 people were killed and 14 were injured. Several of the injured remain in critical condition.

Who are the victims?

CTV News has learned the names of four of the 10 victims: Anne Marie D’Amico, a Toronto woman who family said “only had kindness in her”; Munir Abdo Habib Najjar, a Jordanian man who was visiting family in the city; Chul Min “Eddie” Kang, a chef known for his passion in the kitchen; and Dorothy Sewell, a beloved grandmother known for sharing her love of sports.

Two other victims have been identified, but not named, including a South Korean national and a female Seneca College student. At a press conference on Tuesday, police said those killed and injured were “predominantly women.”

Where can I donate?

A GoFundMe page to raise money for the victims’ funeral expenses has been established by Canada Zakat, a Muslim-Canadian non-profit organization. As of Tuesday evening, the campaign has raised more than $100,000 of its $1 million target.

The City of Toronto has also created a fundraising campaign, called the #TorontoStrong Fund. Money raised will provide emotional support and assistance to help cover emergency expenses for survivors, their families, families of the victims, and for witnesses and their families.

What happened to the suspect?

Less than 30 minutes after the incident began, the suspect was apprehended by police following a tense standoff on Poyntz Ave., which is just south of Sheppard.

He is currently in police custody and made a brief court appearance Tuesday.

Who is the suspect?

Police have identified the suspect as 25-year-old Alek Minassian of Richmond Hill, Ont., which is north of Toronto. Police said Minassian was not known to them before this incident and had no previous criminal record.

CTV News has learned that Minassian briefly entered the Canadian military in the fall of 2017 but voluntary left training after just 16 days for reasons that remain unclear. A LinkedIn account in Minassian’s name describes him as a student at Toronto’s Seneca College.

Just minutes before the attack, a post was made on what is believed to be Minassian’s Facebook page that referenced an “incel rebellion” and praised U.S. mass shooter Elliot Rodger. The term “incel” largely refers to misogynist men who are “involuntarily celibate” and blame women. Rodger, a self-confessed virgin, killed six people and injured 14 others in California in 2014.

Has he been charged?

During a court appearance Tuesday morning, Minassian was charged with 10 counts of first-degree murder and 13 counts of attempted murder. 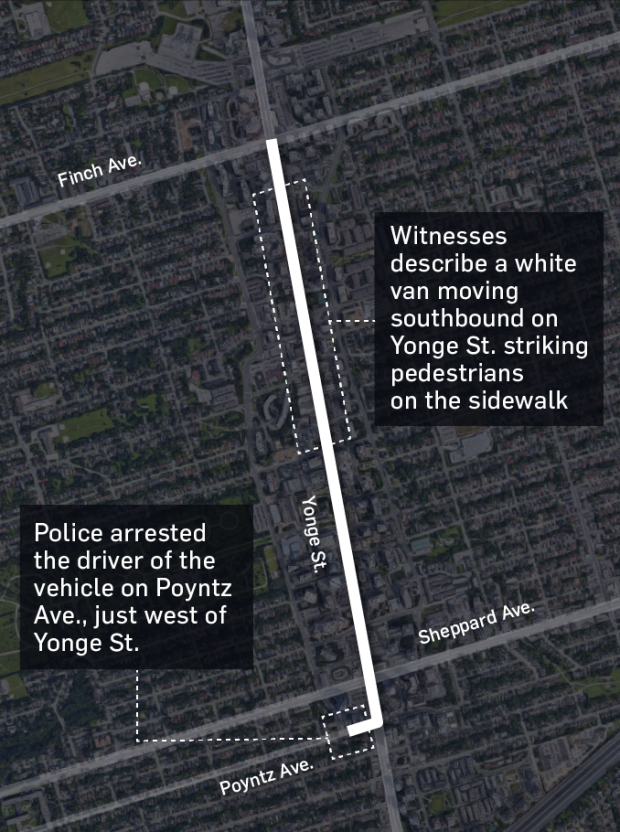