After an intense manhunt involving snipers, drones and sniffer dogs, the RCMP says it was unable to confirm a reported sighting of two B.C. murder suspects in a northern Manitoba Indigenous community. Now, experts say the teens may never be found.

Bryer Schmegelsky, 18, and Kam McLeod, 19, are charged with second-degree murder in the death of University of British Columbia professor Leonard Dyck and wanted in connection with the fatal shooting of Australian Lucas Fowler and his American girlfriend Chynna Deese.

The fugitives’ burnt vehicle was discovered one week ago in Gillam, Man. Before that, the men were spotted about 170 kilometres south of Gillam, in the small town of Split Lake.

On Sunday, the Mounties got a “credible tip” that the pair might have been in York Landing, a First Nations community about 30 kilometres by ferry from Split Lake.

But RCMP Cpl. Julie Courchaine said Monday that police had “not made contact with the individuals” and were therefore “not yet in a position to confirm that these are the wanted suspects.”

Travis Bighetty, a member of the Indigenous neighbourhood watch group Bear Clan Patrol, says he was one of the people who might have spotted the suspects at the York Landing dump.

“All of a sudden the RCMP with the canine units and the assault rifles are getting in the back of a truck,” he said. “We showed them exactly where we (saw) them,” he said.

York Landing is only connected to Gillam by ferry and bush plane, but the men could have walked there using a power line corridor.

‘They may be dead, they may have fled’

Chris Lewis, a former commissioner of the Ontario Provincial Police and CTV’s public safety analyst, says he believes the men might never be found. “Or they might (be) tomorrow,” he said.

Lewis recalled a manhunt in 1991 after three fugitives escaped from a jail in Alberta and went on a crime spree across Canada, ending near Sudbury, Ont.

One was caught in a shootout with police. The other two escaped into the bush near Gogama, Ont. They were later found to have died by suicide.

In that case, “every once in a while (police) would spot some sign in the bush that they’d been here or they’d been there and they’d focus resources on that area,” he said. The RCMP haven’t had the same luck, or haven’t said so publicly.

“They may be dead, they may have fled the area. They may have hunkered down in a cabin. We don’t know,” Lewis said.

Sherry Benson-Podolchuck, a retired RCMP officer, also believes that it’s possible the men may have died.

“If they’re out there in the bush, they’re probably running out of food and water and the bugs would be absolutely tormenting,” she told CTV News Channel. “I can’t imagine surviving too much longer without much help.”

“If they’ve died, they wouldn’t find them through thermal imaging because of course your temperature goes down,” she added. 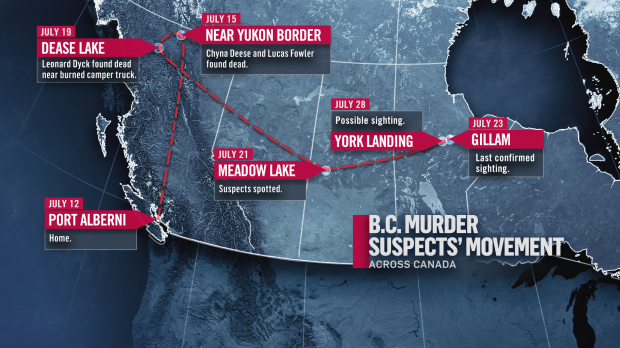 James Favel, executive director of the Bear Clan Patrol, told CTV News Channel that the two men spotted in York Landing who matched the description of the teens “stood out.”

“They were found rummaging through the dump for food, we think. People don’t go to the dump in these communities without a vehicle to seek refuge in should a bear pop up,” Favel said. “We’re talking about an isolated indigenous community. People have to ferry in or fly in, and these two guys were definitely not from around there.”

The patrol group was invited by the grand chief to support York Landing and the surrounding communities after the search for Schmegelsky and McLeod shifted to Gillam, Man. Favel said the investigation has taken a toll on the small communities.

“Everybody is kind of twisted up about this. There is a lot of nervousness, everybody’s in high alert, the town’s in lock down,” he said. “We’re really hoping for a peaceful resolution to this as quickly as possible so people can get back to their normal lives.”

Both local officials and RCMP were quick to dispel rumours that the suspects had been apprehended.

“The (2) suspects are still at large and have NOT been caught,” Leroy Constant, chief of the York Factory First Nation, said Sunday evening in a statement posted to Facebook. “Currently, Heavy winds are limiting helicopter and drones. We are urging everyone to remain indoors with windows and doors locked. Patrols of the community will be done on a 24 hour basis.”

The RCMP also made a plea for the public not to share the location of officers on social media.

Meanwhile, search efforts continued in Gillam, Man. where RCMP officers and Canadian military are going door-to-door speaking to locals, and searching abandoned buildings and trains for the suspects.

The small community of 1,200 people has been at the centre of the manhunt for nearly a week, placing heavy anxiety on an otherwise quiet area.

“You can tell when you talk to a lot of people that it’s very emotional. Some of them you can tell in their voice that it bothers them quite a bit,” Wade Taylor, a member of the Bear Clan Patrol group told CTV Winnipeg.

One resident told CTV Winnipeg reporter Josh Crabb that they flew to Winnipeg from Gillam over the weekend to escape the police activity.

But some say the ongoing police presence has brought a measure of reassurance.

“We’ve been locking our windows quite a bit… checking the yard and stuff like that,” Gillam resident Morris Beardy told CTV Winnipeg. “We feel a little bit more safe here with all the cops around.”

On Sunday, police said they had received more than 200 tips regarding the suspects, none of which established that the suspects had left the Gillam area.

Police reminded the public that anyone with tips about the teen’s whereabouts should contact their local police departments, noting that multiple tips of sightings had been posted to social media and not reported to police.

Suspects likely ‘worn down, getting desperate’

As the intense manhunt for two B.C. murder suspects in northern Manitoba nears the week long mark, experts say the teens are likely ‘worn down’ and getting desperate.

“I could imagine at this point they are getting pretty worn down, pretty desperate, they probably have been for quite some time,” survivalist Sherman Kong, founder of Maple Leaf Survival, told CTV News Channel Monday.

Kong noted that the suspects’ mental state has likely been affected, considering the conditions of the rural region and a lack of food.

“Whether or not they are going to be able to make rational decisions is questionable,” he added.

Despite reports - there is no one in custody at this time. RCMP officers remain in the community of York Landing & continue to investigate the reported sighting of the two suspects. All required resources are being used in this ongoing investigation. Updates to follow.

Canadians with tips about the suspects should immediately contact their local police. Multiple tips of sightings have been posted to social media & NOT directly reported to police. If the tips are valid, it could create a substantial delay in the response by police. #rcmpmb