Parents of autistic adult son not alone in their desperation, say advocates

The troubling story of an Ottawa couple who felt so overwhelmed caring for their adult autistic son that they decided to drop him off at a government office is not unique, say many who work with adults with developmental disabilities.

On Tuesday, Amanda Telford and her husband left their son, Philippe, at a government agency office, saying they could no longer care for him. The Telfords say their son requires 24-hour supervision and there are simply not enough services to help them.

Anne Borbey-Schwartz, a family support coordinator with Autism Ontario, says the Telfords’ situation is all too common. She says there are now many developmentally disabled adults diagnosed with autism but the system is too overwhelmed to help them all.

Many with severe autism need to live in a group homes that can offer 24-hour care but there often are not enough spaces for the demand. Borbey-Schwartz says she hopes the Telfords’ public cry for help is a wakeup call that something needs to be done.

The Telfords say their son needs round-the-clock care when he’s not in school. He has severe autism and the intellectual capacity of a toddler. He also has Tourette syndrome, cannot speak, and has to be constantly managed because of his lack of impulse control.

“He requires constant supervision and because he functions at a two-year-old level, he does not have a sense of danger about cars, traffic and general society rules,” Telford told CTV’s Canada AM Wednesday.

What’s more, Phillippe recently developed insulin-dependent diabetes and needs to live somewhere that can offer him nursing care for his insulin injections.

Telford, who’s a social worker, says Philippe also needs help with his bathing, toileting and personal care, and his food intake has to be strictly managed, because of his diabetes.

“He likes to binge eat. He will binge eat 6 or 8 bananas and that can take his blood sugar levels up,” she explained.

With their own health failing, Telford says she and her husband decided they had to make the difficult decision to leave him in the Ottawa offices of Developmental Services Ontario, the Ontario government agency that connects adults with disabilities to services in the community.

Telford told Canada AM that the conversation she had with her husband when they made their decision was not an easy one.

“It was absolutely gut-wrenching and it was very, very full of tears,” she said. “But we decided unanimously that we can no longer keep Philippe safe.”

Unlike Phillippe, John and Maria Barker’s autistic son Philip, 34, is able to communicate but he too needs constant supervision. As Philip’s parents approach their 70s, they worry about who is going to take care of him once they’re gone.

“You have to be in our shoes to know what that fear is like. It’s overwhelming,” Maria Barker told CTV News.

“It’s something we think about a lot. You try to push it to the back of your mind because it’s just too painful to think about it.”

John Barker said he may live another 15 years, “if I really look after myself. But at some point, this is going to end and then what? There’s a great big, black hole.”

Terry Hewitt, who manages community services at Surrey Place Centre in Toronto, says Developmental Services Ontario office is the agency that acts as the central access point for families of adults with development disabilities.

While Hewitt is not aware of other families who have dropped a family member at a DSO office, she does know that many caregivers feel overwhelmed.

“I can tell you, we do talk to families who are very stressed,” Hewitt told CTVNews.ca. “We have talked to families who have wondered about what they will do as they get older.”

She says if a similarly desperate family were to come to Surrey Place (which is the DSO contact point for adult developmental services in Toronto), her office would work to put them in touch with the appropriate, available services.

“The first thing we would do is change their priority levels, to flag them as needing more help, so that their case would be given a high priority,” Hewitt says.

They would then be put in touch with organizations offering respite care options, day programs and adult protective service workers.

The province does have group homes for adults with developmental disabilities, but the waiting lists are long. Hewitt says some families have chosen to place their children in nursing homes or even dropped them at hospitals while they waited for spots.

Last spring, CTV’s Avis Favaro reported on a Toronto family whose 18-year-old autistic son required hospital care following a rage incident. When the hospitals discharged him, the family refused to take him home, deciding it was safer to leave him in hospital while he waited for a group home spot.

Nearly 400 adults with developmental disabilities are on waiting lists for group home care in Ottawa. The executive director of the DSO office where Philippe was left says that was a first for her office, but it may not be the last.

"It could happen,” Anna Labelle told CTV Ottawa, “And because it's the first time we've experienced it, we have to look at what are our options and what can we do to respond.”

Amanda Telford says she contacted every level of government she could think of, from her MP, to her MPP, to her local community care access centre. No one could offer her a long-term solution.

“Everybody we dealt with treated us very respectfully, very courteously and in a professional and caring way,” Telford says.

“This isn’t about people not doing their jobs. This is about a system being at capacity, and a lack of funding for adults with developmental disabilities.”

Telford says before saying goodbye to her son on Tuesday, she told him she loved him but was just not able to keep him safe. Phillippe was taken to an Ottawa hospice where he’d been several times in recent years. But his mother says the place doesn’t offer long-term care.

“The mandate of the place is to provide short-term respite and emergency care,” Telford explained.

Telford says it’s now up to the provincial government to find him a longer term solution.

“We’re hoping that by Friday, a more appropriate and longer term solution can be found,” Telford said.

“I know that a lot of very capable people are looking into this and we are sure a suitable result will come out of this.”

Telford says she knows that hers is not the only family in Ontario going through this. The Ontario Ombudsman’s Office has been contacted by more than 700 families since launching an investigation in November 2012 into the province’s services for adults with developmental disabilities.

Ontario’s Ombudsman’s office is expected to release its report on the availability of social services for adults with developmental disabilities later this year. 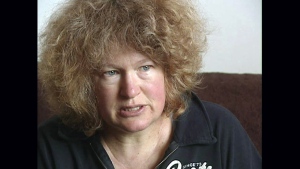 Amanda Telford on caring for her son