TORONTO -- Ontario and Quebec are expected to bear the brunt of the snowy storms this winter, with arctic blasts focused on the eastern Prairies, according to AccuWeather’s forecast.

AccuWeather, a private, Philadelphia-based company, provides weather forecasting to countries including Ireland, Japan and Canada. The full 2019-2020 Canadian winter forecast can be found on AccuWeather’s website.

The following is a breakdown of regions in Canada:

“This looks like a fairly mild winter for much of Western Canada -- especially British Columbia -- relative to normal,” AccuWeather's Canadian weather expert Brett Anderson told CTVNews.ca in a phone interview. He added provinces to the East would receive the brunt of snow this year.

But residents in B.C. should be expecting several rain and snowfall events. The overall weather pattern could mean people across B.C. and parts of the Yukon would likely see smaller amounts of snowfall.

There is also a stronger potential for late spring and summer drought here.

AccuWeather expects drier and sunnier days in places like Vancouver, Victoria and Kamloops this season. And “warmer than normal temperatures” are, in large part, due to a warmer West Coast, Anderson explained.

“Obviously, we got off to a pretty snowy start pretty early in the season but we do think the winter – December, January and February – is going to end up with slightly, below-average snowfall,” Anderson said.

Windier days are expected -- with southwestern part of Alberta likely to be hit by more Chinook winds than usual. These warmer, drier Chinook winds are defined as strong, destructive winds that can occur during storms.

But most Albertans will be spared from the bulk of arctic blasts. However, people in the province should expect a “significant early season snowfall.” 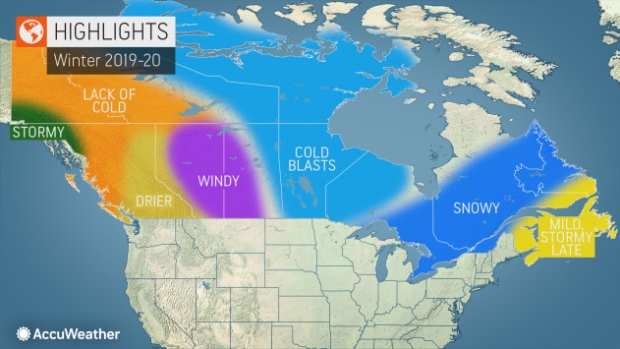 Ontario and Quebec are expected to bear the brunt of the snowy storms with arctic blasts focused on the eastern Prairies, according to AccuWeather’s winter forecast for 2019-2020. (AccuWeather)

This winter, Canadians in the eastern half of the Prairies should expect the strongest surges of arctic air and snowfall from fast-moving storms, according to AccuWeather’s forecast.

This means cities such as Regina and Winnipeg will be in the crosshairs. AccuWeather expects the majority of the winter storms to have limited moisture which means limited snowfall.

And come late winter, people in the region should be expecting drier and milder air.

During December and January, northern and southern Ontario are expected to be hit with a cold, snowy winter -- with the rest of the province looking rather stormy.

This weather pattern could potentially lead to “significant snowfall events” in regions including the Greater Toronto Area and the Ottawa Valley.

In the middle of winter, there is potential for significant ice or sleet events. AccuWeather also predicts near-average daytime highs and above average temperatures at night because of increased cloud cover.

“Not terribly cold winter for southern Ontario ,” Anderson said, explaining that this is, in part, because the Great Lakes will be warmer than normal. “But I do think the cold will be fairly entrenched up towards places like Thunder Bay, Ont.” 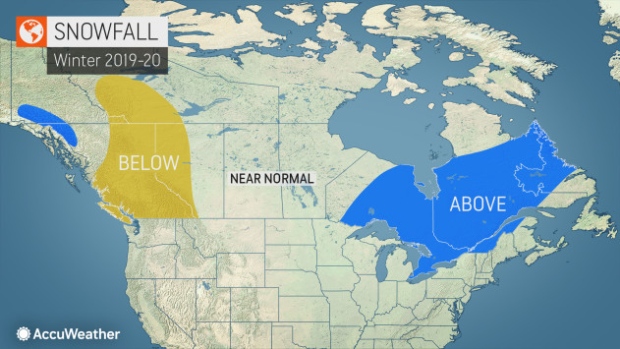 This is AccuWeather's 2019-20 snowfall forecast for Canada. (AccuWeather)

The majority of people in Quebec, including Montreal and Quebec City, should be expecting and prepared for a snowy winter.

The reason for this is a spike in the number of moisture-laden storms from the southwest. But the bulk of the winter isn’t expected to be particularly cold.

Later in the winter, parts of the province could experience a cold spell from a storm which is expected to shift towards the East Coast.

With the predicted weather, AccuWeather anticipates conditions will be favourable for skiing and snowmobiling in both Quebec and Ontario.

Well, the good news for Atlantic Canada is that the forecast should be fairly mild due to a southwesterly flow of air. AccuWeather said normal, offshore water temperatures should help lead to milder air this winter.

In fact, during the first half of winter, rain and ice will be more likely than snow for places such as Saint John, N.B., Halifax and St. John's, N.L.

“But it may turn stormy late in the winter,” Anderson said. However, residents shouldn’t expect a dry winter throughout.

Towards the middle and late part of the season -- from late January through early March -- stormier weather is expected. 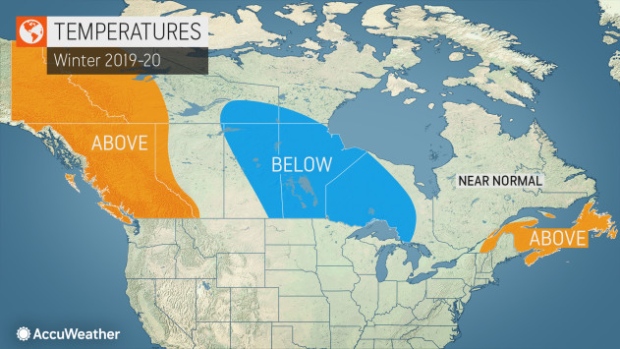 This is AccuWeather's 2019-20 temperature forecast for Canada. (AccuWeather)