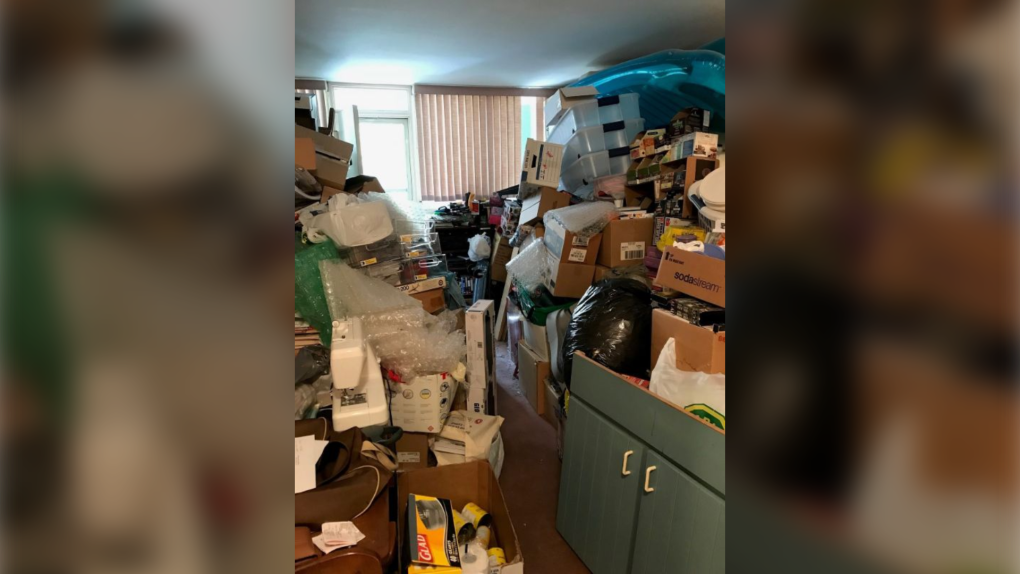 The home of a former client of the Toronto Hoarding Support Services Network is shown in this image. (Courtesy: VHA Home HealthCare)

The piles of clothing were stacked so high they grazed the living room’s ceiling. The kitchen counters were littered with boxes. The stove was unusable because of the papers heaped on top it.

There were only three narrow pathways snaking through the clutter to the living room, the bathroom, and to the kitchen in the one-bedroom unit.

Without access to the bedroom, the 62-year-old woman who lived in this Toronto apartment resorted to sleeping and spending most of her time on her couch, where she eventually developed bed sores as a result.

There were bed bugs to contend with and the home was later deemed a fire hazard.

The woman who lived there had reported mental health issues, including schizophrenia. She is also a hoarder.

And she’s not the only one.

According to the non-profit organization VHA Home HealthCare, hoarding is on the rise in Toronto, particularly among senior women.

In co-operation with 15 other agencies, VHA Home HealthCare has led the Toronto Hoarding Support Services Network (THSSN) since 2015. The network receives funding from the City of Toronto to provide community support services to 50 clients on an annual basis.

Andrea David, the regional community support manager at VHA Home HealthCare, said the coalition’s primary goal is to prevent eviction in the city.

“It’s to promote housing stability and prevent homelessness,” she explained to CTVNews.ca during a telephone interview on Thursday.

In order to achieve this objective, the network launched a new website on Friday focused on providing information and materials to support people with problematic hoarding, their families, and those who work in the sector.

“The issue of hoarding is growing in Toronto. There isn’t a lot of research or best practice guidelines that applies yet to this particular issue that’s on the rise,” David said.

The website, intended to be a one-stop spot for anyone looking for information or help for hoarding, will include online assessment tools, an interactive map, downloadable materials, videos, and links to additional resources and service providers.

“We’re hoping that it’s going to raise the profile of the issue. We’re hoping to promote the network and the work that we do,” David said.

And the issue is a severe one, according to the regional community support manager.

David said the network typically handles more serious cases of hoarding in Toronto after they receive referrals from other organizations or concerned parties.

In most cases, David said the majority of their clients tend to be senior women who are living in potentially dangerous conditions as a result of their hoarding behaviour. She said they have a nine-point rating system to assess the severity of the problem with nine being the most severe.

David said THSSN generally works with cases rated on the higher end of the scale – rated between seven and nine.

“Clothes, books, paper, are probably the top things that we see. Of course, sometimes we see animals. Like animal hoarding is becoming a little bit of an issue,” she said. “We had a case of a lady with 18 cats. We have had cases where some of them aren’t alive. They’re kept in different places in the home, in the freezer…”

To respond to these cases, David said the network first conducts an assessment of the home before creating a six- to eight-month care plan, which can include everything from counselling to clutter coaching, where a specialist works with the client to help them reduce the items in their homes.

In the 62-year-old woman’s case, David said they were able to help her minimize the clutter in her apartment following six months of services. She also received help from a mental health occupational therapist and regularly saw a nurse to treat her bed sores.

“It was a delight that in her four-month post-visit she was continuing to slowly work through reducing the clutter,” David said. “The pathways had increased. She now had a pathway to her bedroom. There was a better, wider pathway to the bathroom. She was able to maintain it.”

David said she and her colleagues are hoping to help others in similar situations by raising awareness of the problem with the launch of the website and to encourage funding for these types of services.

And although the network’s website is focused on Toronto because it’s funded by the city, David said the hoarding material on it is available to everyone.

“The information on the site and some of the tool kits, and the resources that we have available as well, that’s not Toronto-centric,” she explained. “Anybody encountering this particular issue has access to this information and can benefit from it.”

In fact, the THSSN said on its website that it’s estimated that between 1.5 and 6 per cent of the Canadian population has a hoarding problem. According to VHA Home HealthCare, hoarding rates increase with age, with 50 being the average age of those receiving treatment.