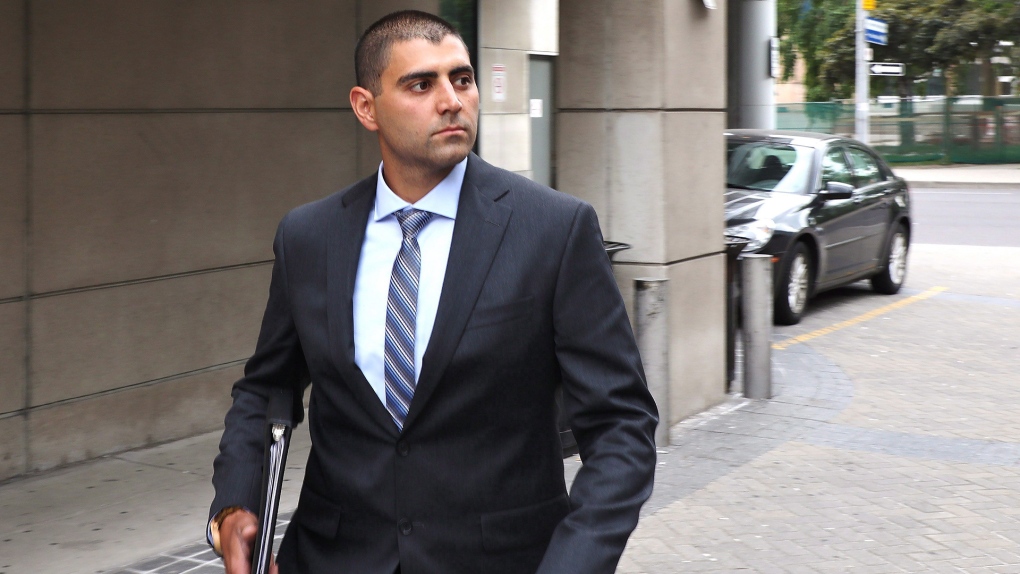 HAMILTON -- Defence and prosecution clashed Monday over whether a Hamilton-area homeowner's military training justified his fatal shooting of a man who broke into his truck at night.

Peter Khill, 28, admits he killed Jon Styres with two shotgun blasts in the early morning of Feb. 4, 2016, but has pleaded not guilty to a second-degree murder, saying he fired in self-defence, believing Styres was pointing a gun at him.

Khill has testified that he spent four years as an army reservist and that he instinctively fell back on his military training when he saw a strange man on his property.

"Soldiers react proactively, that's how they are trained," Khill's lawyer Jeffrey Manishen said in his closing address to the jury, comparing Khill's actions to those of vacationing U.S. soldiers who subdued a gunman on a train in France in 2015.

"Mr. Khill said that's why he acted the way he acted. To take control of the situation."

The jury has heard that Khill fired because he saw Styres raise his arms as though he had a gun, and thought his life was in danger. Styres was not, in fact, armed at the time, the jury has heard.

Crown lawyer Steve O'Brien argued in his own closing address that Khill's army experience should have taught him never to charge into an uncertain situation, and does not justify him behaving rashly when "30 seconds of pausing, of calming down" would have prevented Styres's death.

"The training in how to approach an enemy combatant and kill him -- that he followed closely," O'Brien told the jury. "But the other rules, he completely ignored: that civilian life is not a war zone, that soldiers must take time to genuinely assess the situation. And let me just say, everybody is required to take time to genuinely assess the situations if they can (as) there is not one law for ex-soldiers and one law for everybody else."

Khill and his girlfriend awoke to the sound of banging outside their rural home on the morning of the shooting, and saw Styres inside their truck parked outside, the jury has heard. Khill loaded his shotgun, left the home through the back door and cut through a breezeway between the house and the garage to confront Styres.

But, O'Brien argued Monday, Styres did not pose a reasonable threat to Khill and his girlfriend while they were inside their locked home. Khill should have called 911 and waited for police rather than run out of the house with a loaded shotgun, O'Brien said.

O'Brien told the jury that some of Khill's statements to police and a 911 operator on the morning of the shooting seemed to differ from his testimony at trial.

But at trial, Khill said that Styres was facing sideways with his hand at waist height when he shot him, O'Brien said.

"Jon Styres was only beginning to turn when he was shot (and) he was shot the moment he started to turn," O'Brien said, arguing that Khill's yell would have startled Styres and caused him to turn.

Styres would not have had time to raise his hands in a surrendering motion before Khill shot him, and by the time Khill fired his second shot, Styres was already dying, O'Brien said.

The Crown also disputed the veracity of Khill's story that he performed CPR on Styres after shooting him, arguing that photos taken by police show Khill does not have enough mud on him to have been kneeling on the ground next to the dying man.

Khill's lawyer, who spoke before the Crown, told the jury to expect the prosecutors to accuse his client of lying, and argued that everything Khill did on the morning of the shooting was in accordance with army procedure.

While the jury is legally allowed to find Khill not guilty of second-degree murder and convict him of manslaughter, they should acquit him outright, Manishen argued.

The fact that Styres did not, in fact, have a gun makes no difference to Khill's claim of self-defence, Manishen said.

"The law provides that somebody may actually be mistaken of whether there was or was not a real threat, providing the person honestly believed he was being threatened and there was reasonable grounds for that belief," Manishen said.

The case has garnered attention for similarities to a recent Saskatchewan case, in which white homeowner Gerald Stanley was acquitted of murdering Indigenous man Colten Boushie.

Manishen told the jury that race plays no part in the case, as Khill could not possibly have known 29-year-old Styres was Indigenous given how dark it was at the time of the shooting and how quickly events unfolded.

"He is no trigger-happy, callous, impulsive, rash individual who doesn't care about somebody he's had to confront," Manishen said. "(Khill) lived to defend his country and wanted to continue to live to defend his own life. And that young man should be found not guilty."

Superior Court Justice Stephen Glithero instructed the jury to come to a decision "without sympathy, prejudice or fear," reminding them to disregard anything they've heard about the case outside the courtroom or in the media.

The onus is not on the defence to prove that Khill acted in self-defence, he added.

"It is the Crown that must satisfy you beyond a reasonable doubt that Peter Khill was not acting in self-defence when he killed ... Styres," Glithero said.

The jury is expected to begin deliberating on Tuesday, once Glithero has finished giving them their instructions.