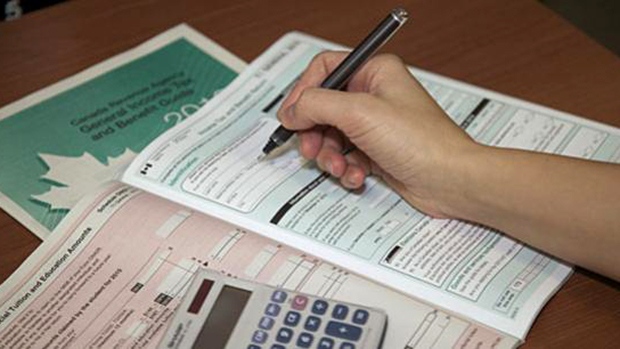 A new report suggests that Canadians spent more last year on taxes than they did on basic necessities.

The average Canadian family spent more last year on taxes than on housing, food and clothing combined, according to a new study.

The report, released Friday by the think tank the Fraser Institute, found that the typical family spent more than 44 per cent of its income on taxes last year. Basic necessities, such as groceries and housing, accounted for 36 per cent of income.

Regardless, the report serves as a reminder for just how much Canadians pay each year in taxes, said Finn Poschmann, a resident scholar at the Fraser Institute.

“More than anything else, it reveals that government has grown a lot of the past couple of generations,” Poschmann told CTVNews.ca on Friday.

The report’s findings were calculated based on municipal, provincial and federal taxes, including vehicle taxes, property taxes, alcohol and tobacco taxes and sales taxes.

But since then, government services such as healthcare have vastly expanded, Poschmann said.

“We’re certainly getting more. We have more health services, more child benefits, lots of things people like. Whether people are getting more for their money or value for money is very much in the eye of the beholder,” he said.

The report also points out that the average Canadian family makes more money than ever before, at an average of $88,865. That’s $16,655 more than the average family’s income a decade earlier.

Poschmann said that, while federal taxes have gone up, the federal Liberals are not responsible for the trend. Instead, he said that the long-term rise in government spending at the federal and provincial levels is largely to blame.

“Our economy has grown in size over the past few decades, real wages have grown. Government has grown with it in lock step. And in some years it’s grown faster than the economy and some years slower, but overall we have a much bigger government than we did a couple generations ago.”

Compared to other developed countries, Canada’s tax spending is “pretty much in the middle of the pack,” Poschmann said, with Scandinavian countries charging more in taxes.

Income taxes accounted for the highest tax expenditure last year, at $12,242 for the average family, followed by payroll and health taxes at $7,475 and sales taxes at $5,839.