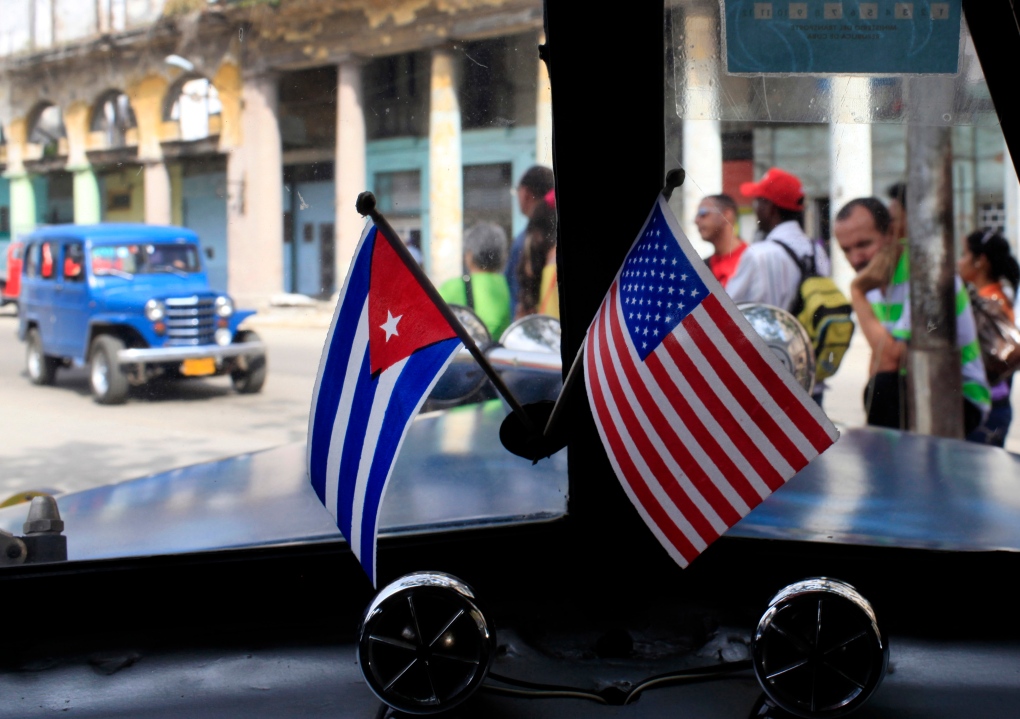 In this March 22, 2013 file photo, miniature flags representing Cuba and the U.S. are displayed on the dash of an American classic car in Havana, Cuba. (Franklin Reyes/AP Photo)

WASHINGTON -- The Obama administration, following through on its declaration of warming ties with Cuba, has eased travel restrictions and opened a wide range of new export opportunities with the communist island.

The series of executive branch moves, taken together, have had the effect of punching a large hole in America's half-century-old embargo, although only Congress has the authority to fully end the 54-year embargo. President Barack Obama announced last month that he would soften the restrictions, and a new set of government regulations took effect Friday.

Obama argued at the time that "these 50 years have shown that isolation has not worked." The new spirit of co-operation emerged after 18 months of secret talks that culminated in the exchange of imprisoned spies and the release of Alan Gross, a U.S. government contractor who had been imprisoned in Cuba for five years.

Less than a month after the Cold War foes agreed to end their enmity, the U.S. Commerce and Treasury departments unveiled new rules Thursday permitting U.S. citizens to visit Cuba without special permits.

Most U.S. travellers still will be required to go on supervised group trips, but now virtually any U.S. company or organization can offer such trips without the paperwork and inspections that discouraged past expansion of travel to Cuba. Some tour operators, already seeing unprecedented interest in legal travel to Cuba, expect some tourists to simply ignore the restrictions.

American companies also now will be permitted to export telephones, computers and Internet technology, and to send supplies to private Cuban firms. However, Cuban authorities have said nothing about the restrictions they might impose on U.S. products entering a country that has long frustrated foreign investors with bureaucratic obstacles and tapped-out infrastructure.

The changes are the latest step in Obama's plan to rebuild relations with Cuba after a history marred by suspicion, espionage and conflict. The new regulations come three days after U.S. officials confirmed the release of 53 political prisoners Cuba had promised to free.

They also allow U.S. citizens to start bringing home small amounts of Cuban cigars, long adored by aficionados but banned under U.S. law. The limit is $100 for alcohol and tobacco products and $400 in total goods.

Commercial flights between the two nations are still some time away. Before airlines offer routine service from one country to another, the two governments must agree on the terms in a treaty.

Such an agreement did exist between the U.S. and Cuba in the 1950s. However, Thursday afternoon the U.S. Transportation Department posted a notice saying the two nations need to start fresh. The U.S. airlines with 1950s permission to fly to Cuba will not suddenly regain that right and are not favoured in the government's new deliberations.

United Airlines, Delta Air Lines and JetBlue Airways have all expressed an interest in flying to the island nation.

Hotels in Havana and elsewhere generally fall short of international standards, and those with better food and service are almost always fully booked during the winter high season. So the tourism surge could be challenging.

"American tourists are really demanding," said Maikel Gonzalez, a 34-year-old hotel receptionist in Havana. "How do I explain to one that the taxi didn't come because it doesn't have tires or that there's no water in the rooms?"

Cubans also can legally rent out their homes or apartments, which could mean money outside of state control going to private citizens -- something American officials say they want.

Most of the other possible changes now depend on Cuban President Raul Castro's government.

U.S. officials say American companies will have to weigh for themselves the risks of their exports colliding with Cuban bans.

Casting a shadow on potential deals is the possibility of litigation by Cuban-Americans and U.S. firms whose property was confiscated in Fidel Castro's 1959 revolution. Some may sue companies entering into business with the Cuban government. In Washington, Congress may also seek to erect barriers to new investment.