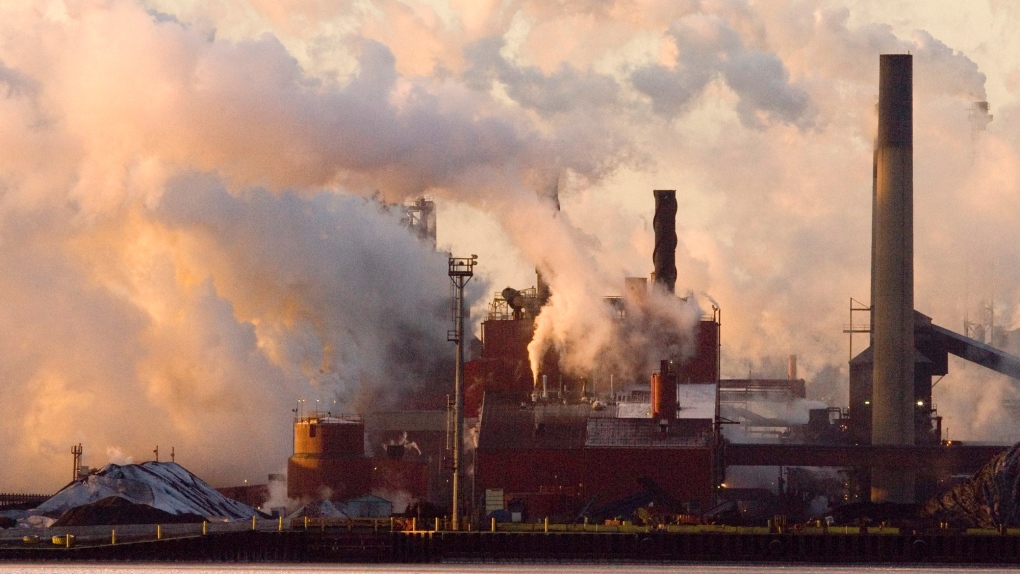 Steel plants are seen across the bay at sunrise in Hamilton, Ont. Wednesday Feb. 7, 2007 (Adrian Wyld / THE CANADIAN PRESS)

WASHINGTON -- The United States has fired a warning shot in what could become a global trade war over steel and aluminum, threatening to impose a wide range of tariffs and quotas within several months on an undetermined number of countries.

It is the biggest international exporter of both steel and aluminum to the United States, so it has a significant stake in whatever President Donald Trump decides to do with a series of recommendations he received Friday.

His administration has suggested a range of punitive options.

One would see the U.S. impose a 24 per cent tariff on steel imports from everywhere -- Canada included. Another option is a 53 per cent tariff on a smaller list of countries that does not include Canada, but does include Brazil, China, Costa Rica, Egypt, India, Malaysia, Republic of Korea, Russia, South Africa, Thailand, Turkey and Vietnam.

A third option is limits on imports through quotas. And, finally, a fourth option is for Trump to simply ignore Friday's recommendations, or do something else entirely. The president must choose a course of action by April.

"The process is ongoing," said Canadian government spokesman Adam Austen, making the point that Canada buys more U.S. steel than the rest of the world combined.

"We will continue to vigorously represent Canadians' interests with the U.S."

U.S. Commerce Secretary Wilbur Ross announced his recommendations Friday. He did so upon invoking a provision in U.S. trade law that allows the president to take punitive actions if it's a matter of national security.

Ross has employed a loose definition of national security. To him, it's not just about having enough steel to build tanks. It's also about roads, and bridges and the economic well-being of American workers.

He also spelled out the potential consequences for America's No. 1 trading partner. In short, Canada's situation is now in the president's hands: "If (Trump) goes the targeted route, Canada would be excluded," Ross told a conference call. "(But) the blanket-tariff alternative and the blanket-quota alternative would target all countries...

"(Trump) will decide what he's going to do... He is not bound by these recommendations... He could do something totally different -- or do nothing."

The recommendations released Friday also include aluminum. The president is being asked to consider a 7.7 per cent tariff on all aluminum exports from all countries, or a 23.6 per cent tariff on just a few countries: China, Hong Kong, Russia, Venezuela and Vietnam.

Ross said he anticipates other countries might fight back: "It wouldn't surprise us if there were (retaliations)."

In preparing its recommendations Friday, the administration heard repeated warnings about potential unintended consequences. For example, in its testimony, one group involved in the international steel trade shared a cautionary tale about oil.

He described how 1960s U.S. quotas on oil pushed then-ally Venezuela into the arms of Middle Eastern competitors, leading them to create the OPEC cartel -- with, by the 1970s, disastrous consequences on oil prices, inflation, the broader global economy and the American energy supply.

The government report also had some encouraging words for Canada. In several parts of the report, Canada was described as a partner and supplier to the American aluminum industry -- not a threat.

One of the witnesses who contributed testimony was a Canadian -- who happens to be a key player in the U.S. steel industry, and a longtime associate of Ross's: the Ontario-born president of the United Steelworkers union, Leo Gerard.

Gerard testified that Canada is the only country that should be exempted from any potential action in the steel sector. He cautioned, however, that the countries need to work harder to keep overproduced, dumped Chinese steel from getting mixed into North America's supply chains.

"I'm confident that ... Canada should not be named for either steel or aluminum," Gerard said in an interview with The Canadian Press this week.

"(But) they have to do something. Not only with the Chinese, which is really important. They have to recognize that the Chinese overcapacity (is a problem elsewhere)... I'm optimistic there will be some broad-based, and possibly targeted, remedies."

Gerard wants to see the U.S. to create a new trade-enforcement unit to investigate for dumped product.

A retired U.S. army brigadier general offered a similar message. In his testimony, John Adams said Canada needs to beef up its monitoring for dumped steel. But he urged that the neighbour be spared punitive action: "The one supplier in whom I have complete confidence is Canada. Not only do we currently have a steel surplus with Canada, but we share a border and have synergistic strategic, economic, and national security interests."