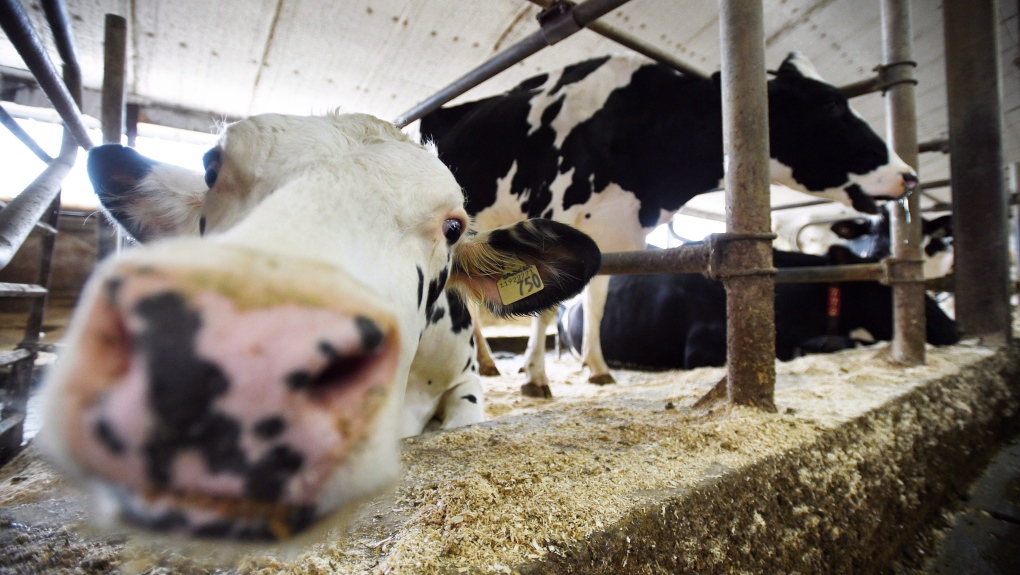 Dairy cows are shown in a barn on a farm in eastern Ontario on Wednesday, April 19, 2017. (THE CANADIAN PRESS/Sean Kilpatrick)

WASHINGTON -- A senior American lawmaker is demanding changes that would open Canada's dairy market as part of any new NAFTA, a sign of the lingering irritants holding up a deal.

His request illustrates the ongoing differences between the countries despite predictions about a deal being close, including from U.S. Vice-President Mike Pence who over the weekend said an agreement could be achieved within weeks.

Schumer is urging the U.S. team to seize a rare opportunity to lower what he calls Canada's "dairy wall," and says opening up the market must be a top priority.

"Securing meaningful and enforceable commitments that will allow U.S. dairy producers to compete with Canada's on a level playing field should be a top priority in NAFTA renegotiations," Schumer wrote in the letter, which he released publicly Monday.

"As I have expressed to you many times, I strongly believe that we should not miss this opportunity to protect our dairy producers from Canada's recent predatory trade practices."

Schumer isn't the only leading legislator for whom it is a priority; the Republican speaker of the House of Representatives, Paul Ryan, is from the dairy-producing state of Wisconsin and also considers it a key issue.

The view of American lawmakers matters in a trade negotiation.

U.S. law requires that they must eventually vote to ratify any agreement, and that they be consulted throughout the bargaining process by American trade negotiators.

Lighthizer told lawmakers at a recent hearing that dairy will likely be one of the final issues to be resolved. He expressed some understanding that the topic is politically sensitive in Canada, where the dairy industry is concentrated in the two most populous provinces, Ontario and Quebec.

The countries do not have free trade in dairy -- and the U.S. is calling for two changes.

Over the longer term, it wants the elimination of Canada's supply-management system. The system limits competition, but guarantees stability on Canadian farms by capping imports, imposing tariffs, and setting prices at the grocery store.

The shorter-term U.S. objective is to get Canada to eliminate its special rule allowing byproducts for cheese-making, skimmed off of milk, to be sold at non-supply managed, market prices.

The Canadian government's view is that the U.S. also protects its dairy market in other ways, such as price-stabilization programs and counselling services when prices crash and farms face collapse.

Some Canadian industry defenders point to analysis that U.S. farmers consistently sell dairy at below-market prices, because they benefit from a patchwork of policies to keep them profitable.