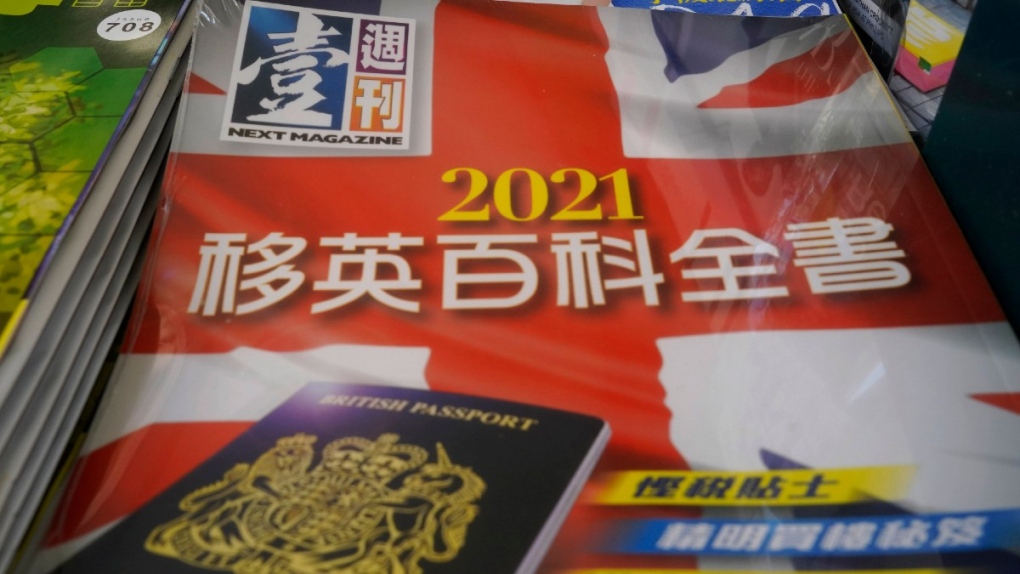 Copies of Next Magazine, owned by Jimmy Lai, are displayed for sale at a newsstand in Hong Kong, on May 17, 2021. (Kin Cheung / AP)

HONG KONG -- The Hong Kong stock exchange halted trading of Next Digital shares Monday at the media company's request after authorities froze assets belonging to its founder, Jimmy Lai, who has been a high-profile voice in the the territory's pro-democracy movement.

Later in the day, the media tycoon and nine other pro-democracy activists pleaded guilty to taking part in an unlawful assembly in 2019. Lai is already serving a 14-month sentence for his role in two other unauthorized assemblies during a period when Hong Kong residents were involved in mass anti-government protests.

Next Digital said in a filing that it requested the trading halt after authorities announced the freeze on Lai's assets Friday under a national security law that critics say is meant to snuff out dissent in the semi-autonomous Chinese territory. Next Digital publishes pro-democracy tabloid Apple Daily, and the company was founded by Lai, who owns a 71% stake and is its controlling shareholder.

The freezing of Lai's assets raises questions about Next Digital's survival as a company. Advertisers have become wary of Apple Daily's staunch, pro-democratic stance in Hong Kong, adversely impacting its revenue as authorities crack down on dissenting voices in the city at the urging of leaders in Beijing.

Hong Kong security minister John Lee dismissed concerns that the freezing of Lai's assets was an attack on press freedom and said that under the national security law, he is able to freeze assets if there are reasonable grounds to suspect they are related to offenses that endanger national security.

"The action that we have taken is acting in accordance with the laws to tackle crimes that are endangering national security. It's not directly related to journalism," he said to reporters Monday.

"It is illegal activities that we are dealing with. It is not press work. In regard to timing for my issuing of notices, I will issue it when I have reasonable suspicion that the power should be exercised," Lee said.

Lai and the nine others who pleaded guilty over an October 2019 demonstration can make mitigation pleas on May 24 and the sentences are to be handed down on May 28. They face up to five years' imprisonment.

The mass protests started over a proposed extradition bill that many saw as an infringement on the freedoms Hong Kong was promised when it was handed over from British to Chinese control in 1997 and then evolved to include broader demands for democracy. After months of protests and sometimes-violent clashes between security forces and protesters, Beijing began tightening its control over the territory.

Last year it imposed a new national security law on the city that is widely seen as giving authorities a way to crack down on dissent that was previously legal. The law broadly criminalizes secession, subversion, terrorism and foreign collusion, and police have arrested more than a hundred people under the legislation.