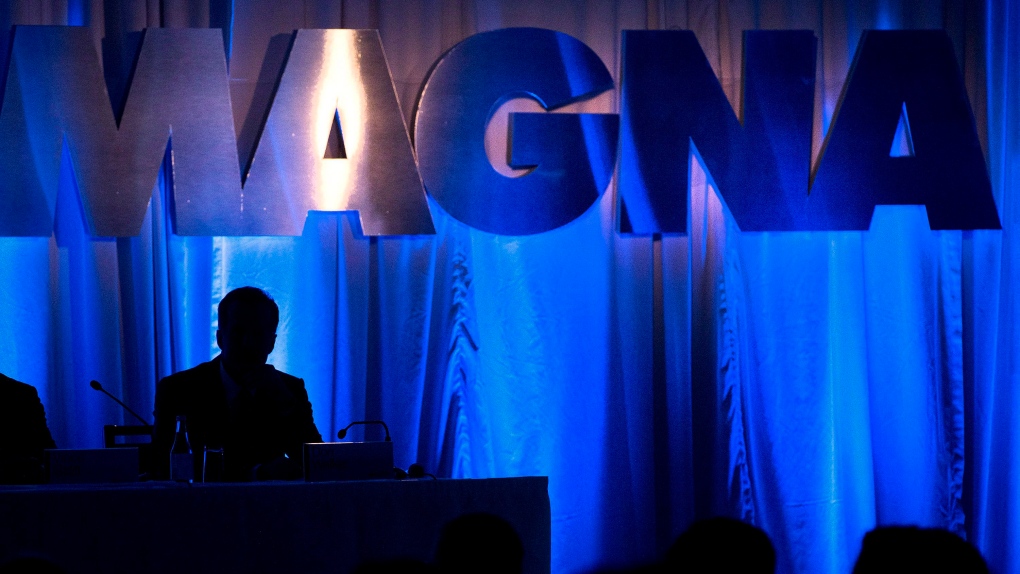 Donald J. Walker, CEO of Magna International Inc., is silhouetted as he waits for the company's annual general meeting to begin in Toronto on May 10, 2013. (Nathan Denette / THE CANADIAN PRESS)

Magna International Inc. has cut its outlook for the year on lost volume from the nearly six-week strike by GM workers in the United States.

The Canadian auto-parts manufacturer, which reports in U.S. dollars, said Friday it now expects total sales this year of between $38.7 billion and $39.8 billion, down from between $38.9 billion and $41.1 billion.

The strike by 49,000 United Auto Workers shut down production at more than 30 GM facilities in the U.S. and forced GM to cut back or suspend some operations in Canada and Mexico as well -- affecting suppliers like Magna.

"All things considered, including a labour strike at our largest customer, our adjusted third-quarter results came in relatively in line with our expectations," Walker said on a conference call.

Adjusted earnings for the quarter ending Sept. 30 came in at $1.41 per share, compared with $1.56 per share a hear earlier, but ahead of the $1.34 expected by analysts according to financial markets data firm Refinitiv.

The strike, which continued until Oct. 25, will have a greater effect on fourth quarter results, the company said.

Magna could regain some of the lost volume if GM runs overtime shifts, but production wouldn't be as efficient or as profitable, said Walker.

"Production may not be quite at the margins we would normally have in regular time, but it's still good for us if they're running extra volume."

Unadjusted, Magna had a net loss of $233 million, or 75 cents per share, after recording a $537 million non-cash impairment charge related to its Getrag joint ventures. The ventures have been hit by declines in manual transmission demand as well as declining Chinese auto sales.

"We're disappointed in the recent results and future projections in the Getrag joint ventures, in particular, the growth in the Chinese joint ventures," said Walker.

However, he said Magna's wholly-owned transmission business based in Europe continues to grow.

This report by The Canadian Press was first published Nov. 8, 2019.