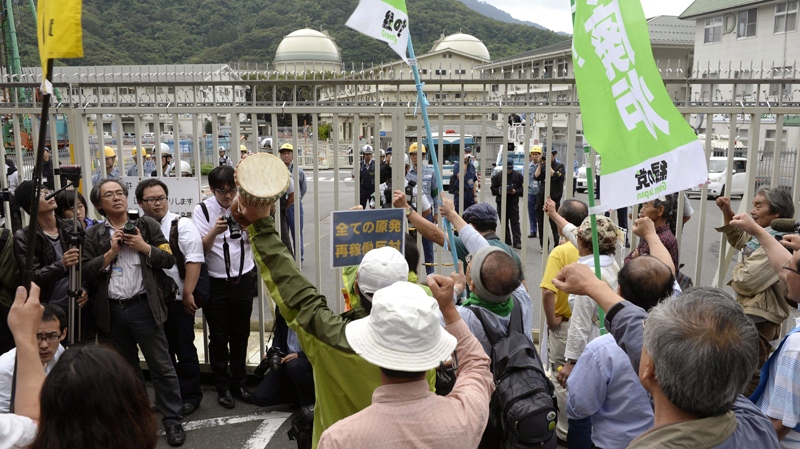 Protesters punch the air in front of a gate of the Takahama nuclear power station, background, after a freighter carrying MOX, a mixture of uranium and plutonium oxide, arrived in Takahama town, Fukui prefecture, Japan, Thursday, June 27, 2013. The power plant on the Sea of Japan coast has received the first shipment of reprocessed nuclear reactor fuel sent from France since the 2011 disaster that forced it to shut down reactors. (AP / Kyodo News)

TOKYO -- Japan is moving a step closer to restarting nuclear reactors as utilities are set to ask for safety inspections at their idled reactors, the clearest sign of Japan's return to nuclear energy nearly two and a half years after the Fukushima disaster.

With all but two of its 50 reactors off line since the crisis, Japan has been without nuclear energy that once supplied about a third of its power.

Four of nine Japanese nuclear plant operators -- supplying the regions of Hokkaido, Kansai, Shikoku and Kyushu -- will apply for safety inspections by the Nuclear Regulation Authority for a total of 10 reactors at five plants Monday, when new safety requirements take effect. Kyushu Electric Power Co. is expected to apply for two more reactors at another plant later in the week.

The new standards are stricter than in the past and for the first time compulsory, and only reactors that pass the inspections will be allowed to reopen -- possibly early next year. Each inspection could take several months, according to the watchdog, plus obtaining local consent may take another few weeks. Critics say the rules have loopholes, including grace periods for some safety equipment.

Hit by soaring gas and oil costs to run conventional power generation plants to make up for the shortfall, Japanese utility companies have desperately sought to put their reactors back online.

Nearly all the utilities owning nuclear power plants reported huge losses last fiscal year due to higher costs for fuel imports. Hokkaido Electric Power Co., for example, said it has been hit with additional daily fuel costs of 600 million yen ($6 million) to make up for three idled reactors. Nuclear operators have already requested rate hikes or plan to do so.

The new requirements specify for the first time that plants must take steps to guard against radiation leaks in the case of severe accidents, install emergency command centres and enact anti-terrorist measures. Operators are required to upgrade protection for tsunamis and earthquakes, as well as tornadoes and aviation accidents.

Safety was previously left up to the operators, relying on their self-interest in protecting their own investments as an incentive for implementing adequate measures. Tokyo Electric Power Co. came under fire for underestimating the risk of a tsunami and building a seawall that was less than half the height of the wave that hit the Fukushima Dai-ichi plant on March 11, 2011, knocking out power and cooling systems, which led to meltdowns in three of its reactors. About 160,000 evacuees still cannot return to their homes.

"We decided to apply because we're confident about the safety measures we've taken," said Shota Okada, a spokesman at Hokkaido Electric Power Co., filing for the triple-reactor Tomari plant. "We'll do everything to accommodate a smooth inspection process."

Critics say the requirements still have loopholes that make things easier for operators, including a five-year grace period -- given to reactors known as PWRs that come with larger containment chambers considered less likely to suffer from pressure buildup than ones like those ravaged at Fukushima -- for installing some mandated new equipment and a full-fledged command centre. This means about half of the 48 reactors that are PWRs, or pressurized water reactors, could operate without the safety features up to five years.

All 10 reactors set for inspections are PWRs, and filtered vents and command centres are reportedly still under way at many of them.

Opponents say the approvals are aimed at resuming reactor operations, although nearby communities lag in enacting needed emergency and evacuation procedures.