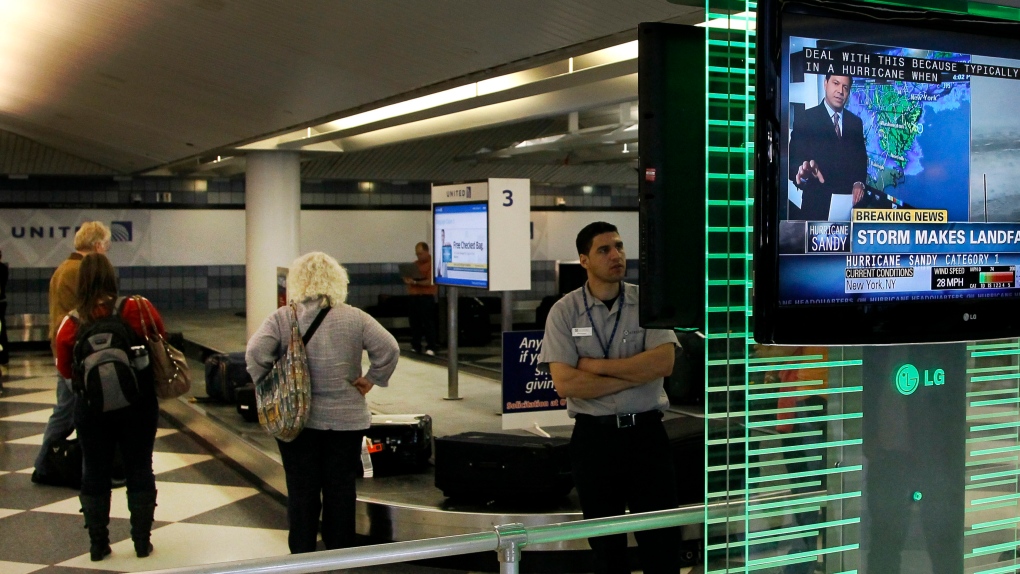 NEW YORK -- Superstorm Sandy grounded well over 10,000 flights across the Northeast and the globe, and it could be days before some passengers can get where they're going.

According to the flight-tracking service FlightAware, more than 13,500 flights had been cancelled for Monday and Tuesday, almost all related to the storm. By early Tuesday morning, more than 500 flights scheduled for Wednesday also were cancelled.

Major carriers such as American Airlines, United and Delta cancelled all flights into and out of three area airports in New York, the nation's busiest airspace. About one-quarter of all U.S. flights travel to or from New York airports each day. So cancellations here can dramatically impact travel in other cities.

Delays rippled across the U.S., affecting travellers in cities from San Francisco to Atlanta. Others attempting to fly out of Europe and Asia also were stuck.

Narita, the international airport near Tokyo, canceled 11 flights Tuesday -- nine to the New York area and two to Washington, D.C. All Nippon Airways set up a special counter at Narita to deal with passengers whose flights had been canceled.

"All flights to New York yesterday and today are cancelled. What will happen tomorrow no one knows," airline spokeswoman Megumi Tezuka said.

Sandy caused Eric Danielson to miss his first day of work at Langley Air Force Base in Virginia. He thought he'd be looking at a two-hour layover in Hartsfield-Jackson Atlanta International Airport on his way from San Francisco to Norfolk, Va.

But Sandy changed his schedule. "Now it's beginning to be a 28-hour layover until tomorrow," he said Monday.

Hurricane Sandy converged with a cold-weather system and made landfall over New Jersey on Monday evening with 80 mph winds. The monstrous hybrid of rain and high wind -- and even snow in some mountainous inland areas -- killed at least 16 people in seven states, cut power to more than 6 million homes and businesses from the Carolinas to Ohio, caused scares at two nuclear power plants and stopped the presidential campaign cold.

The storm was forecast to head across Pennsylvania before taking another sharp turn into western New York by Wednesday morning, bringing heavy rain and local flooding.

The flight cancellations were on par with a major winter storm in early 2011 that forced 14,000 flights to be scrapped over four days.

He learned he could be stuck in Hong Kong for nearly a week because the next available seat was Nov. 4. He was put on a waiting list for seats that could become available earlier.

"They just say: Yeah, it's a pretty big waiting list," said Shrem, throwing up his hands. In the meantime, he'll have to fork out $400 a night to continue staying at a nearby hotel. The airline won't pay for accommodation for stranded passengers if delays are weather-related.

Even if storm damage is minor it could be a week before operations are normal at major East Coast airports, said Angela Gittens, director general of the Airports Council International, a trade group for airports worldwide.

"The storm has such a wide swath and so many major airports are involved that it's going to take some time (to recover) because those airplanes are so far away," said Gittens, who served as aviation director at Miami International Airport Dade during several hurricanes from 2001 to 2004.

Airports in the metropolitan New York City area were open, but air carriers were not operating. The Port Authority of New York and New Jersey said Monday that travellers shouldn't even try to go to Kennedy, Newark Liberty, LaGuardia and Stewart airports.

JetBlue Airways Corp. cancelled 1,200 flights for Sunday through Tuesday. The airline is hoping to resume flights at its Kennedy airport hub Wednesday, but is worried about flooding of the airport's runways since they are all basically at sea level and near bodies of water, according to Rob Maruster, the company's chief operating officer.

The impact on airline's bottom lines is unclear. Many of the customers on flights currently being canceled will reschedule later on, so the airlines will still collect the fares. But the cost of parking planes for days, along with potential damage, will undoubtedly cost airlines millions.

Travellers overseas could wait days to get to the East Coast of the U.S.

Frankfurt airport canceled 12 incoming and nine outgoing flights because of the storm, adding to 12 it scrapped on Monday. Spain's biggest airports in Madrid and Barcelona axed 19 flights, on top of 13 canceled the day before.

Air India said its daily flights to Newark and JFK had been halted since Sunday.

South Korea's Korean Air said it cancelled three flights to New York and one flight to Washington on Monday and Tuesday. Asiana Airlines cancelled its Tuesday flight to New York. Its Monday flight to JFK was delayed by 26 hours, then was postponed again by another 26 hours.

Hong Kong's Cathay Pacific Airways had cancelled six New York flights by Tuesday. The airline said another New York flight via Vancouver will only go as far as the Canadian city.