The making of a superstorm: Part hurricane, part nor'easter and all trouble 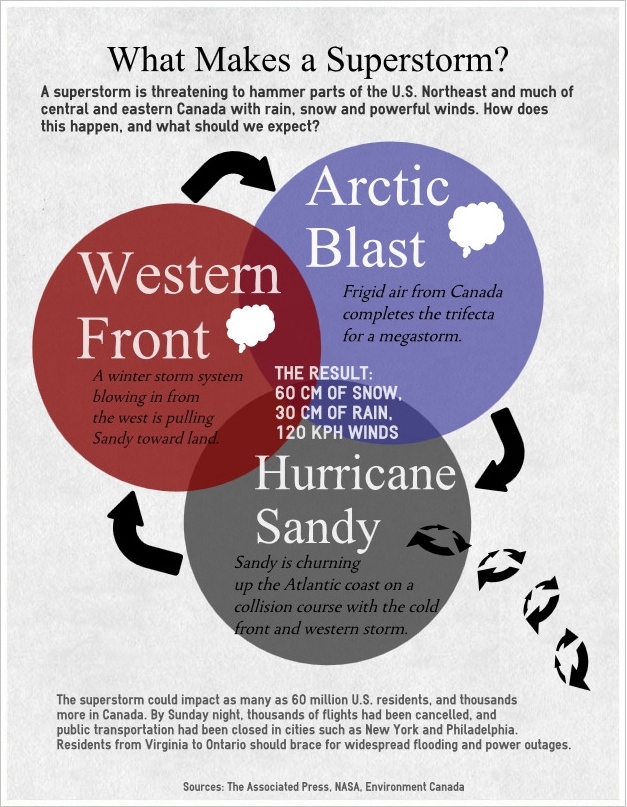 WASHINGTON -- The storm that is threatening 60 million Americans in the eastern third of the nationwith high winds, drenching rains, extreme tides, flooding and probably snow is much more than just an ordinary weather system. It's a freakish and unprecedented monster.

How did it get that way?

Start with Sandy, an ordinary late summer hurricane from the tropics, moving north up the East Coast. Bring in a high pressure ridge of air centred around Greenland that blocks the hurricane's normal out-to-sea path and steers it west toward land.

Add a wintry cold front moving in from the west that helps pull Sandy inland and mix in a blast of Arctic air from the north for one big collision. Add a full moon and its usual effect, driving high tides. Factor in immense waves commonly thrashed up by a huge hurricane plus massive gale-force winds.

Do all that and you get a stitched-together weather monster expected to unleash its power over 800 square miles, with predictions in some areas of 12 inches of rain, 2 feet of snow and sustained 40- to 50 mph winds.

"The total is greater than the sum of the individual parts" said Louis Uccellini, the environmental prediction chief of the National Oceanic and Atmospheric Administration meteorologists. "That is exactly what's going on here."

This storm is so dangerous and so unusual because it is coming at the tail end of hurricane season and beginning of winter storm season, "so it's kind of taking something from both -- part hurricane, part nor'easter, all trouble," Jeff Masters, director of the private service Weather Underground, said Saturday.

With Sandy expected to lose tropical characteristics, NOAA is putting up high wind watches and warnings that aren't hurricane or tropical for coastal areas north of North Carolina, causing some television meteorologists to complain that it is all too confusing. Nor is it merely a coastal issue anyway. Craig Fugate of the Federal Emergency Management Agency told reporters Saturday: "This is not a coastal threat alone. This is a very large area. This is going to be well inland."

Uccellini, who estimated that 60 million people will feel the storm's wrath somehow, said: "This storm as it grows and moves back to the coast on Monday and Tuesday, the circulation of this storm will extend all the way from the Midwest, the Ohio Valley, toward the Carolinas up into New England and southern Canada. It's really going to be an expansive storm system."

It's a topsy-turvy storm, too. The far northern areas of the East, around Maine, should get much warmer weather as the storm hits, practically shirt-sleeve weather for early November, Masters and Uccellini said. Around the Mason-Dixon line, look for much cooler temperatures. West Virginia and even as far south as North Carolina could see snow. Lots of it.

It is what NOAA forecaster Jim Cisco meant Thursday when he called it "Frankenstorm" in a forecast, an allusion to Mary Shelley's gothic creature of synthesized elements.

Cisco and others have called this storm unprecedented. Uccellini, who has written histories about winter storms, said the closest analogs are the 1991 Perfect Storm that struck northern New England and a November 1950 storm. But this is likely to be stronger and bigger than the Perfect Storm; it will strike farther south, and affect far more people.

In fact, the location among those with the highest odds for gale-force winds in the country's most populous place: New York City. New York has nearly a 2-in-3 chance of gale force winds by Tuesday afternoon.

One of the major components in the ferocity of the storm is that it is swinging inland -- anywhere from Delaware to New York, but most likely southern New Jersey -- almost a due west turn, which is unusual, Uccellini said. So the worst of the storm surge could be north, not south, of landfall. And that gets right to New York City and its vulnerable subways, which are under increasing risk of flooding, he said.

"There is a potential for a huge mess in New York if this storm surge forecast is right," Masters said.

Add to that the hundreds of miles of waves and the overall intensity of this storm, Uccellini said in an interview, and "we are in the middle of a very serious situation."

Forecasters are far more worried about inland flooding from storm surge than they are about winds.

There are several measures for hurricanes. And one NOAA research tool that measures the intensity of hurricane overall kinetic energy forecasts a 5.2 for Sandy's waves and storm surge damage potential. That's on a scale of 0 to 6, putting it up with historic storms, such as Katrina. It rates a much smaller number for wind.

Because of the mix with the winter storm, the wind won't be as intense as it is near the centre of a hurricane. But it will reach for hundreds of miles, spreading the energy further, albeit weaker, meteorologists said.

Uccellini and Masters said they expect the central pressure of the storm to drop to a near record low for the Mid-Atlantic or Northeast for any time of year. That is a big indication of energy and helps power the wind. This puts it on par with the 1938 storm that hit Long Island and New England, killing 800 people, or the equivalent of a category 4 hurricane.