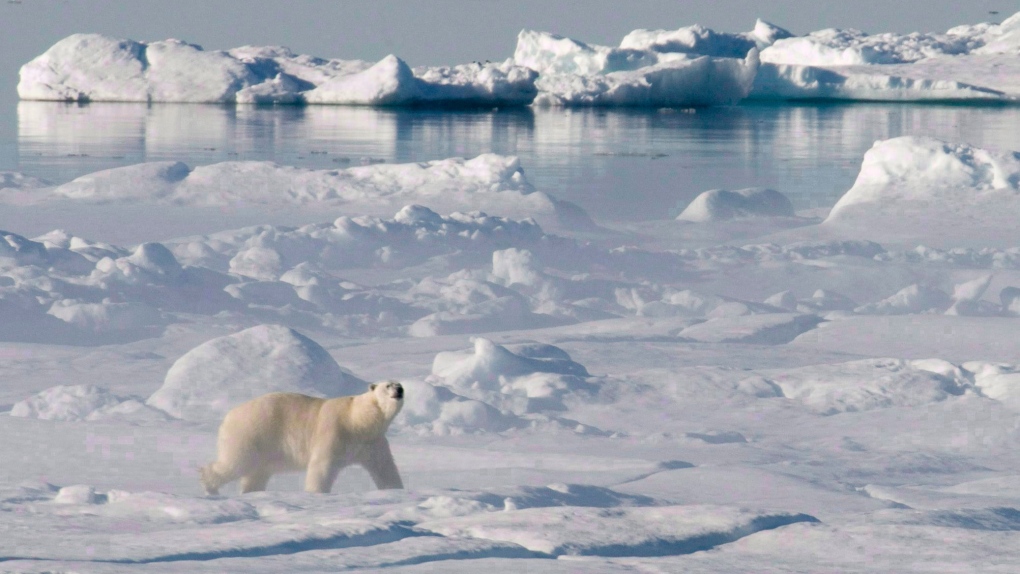 A polar bear stands on a ice floe in Baffin Bay above the Arctic circle as seen from the Canadian Coast Guard icebreaker Louis S. St-Laurent on July 10, 2008. (Jonathan Hayward / THE CANADIAN PRESS)

A new analysis shows Chinese consumers with an appetite for luxury have taken over from American sport hunters as the main buyers of Canadian polar bear fur.

But the study to be presented this week at a conference in Vancouver concludes there's no reason to believe that the sale of bear hides or other parts threatens the animal's future.

"This increasing Chinese market may have stimulated some increased hunting, but really what it did is stimulate increased exporting," said Ernest Cooper, a consultant who is to present his findings Wednesday at ArcticNet, which brings together Arctic researchers from all fields.

Canada is the only country in the world that allows commercial trade in polar bears.

Cooper, whose work has been sent to all governments that manage polar bears, found the number of hides exported by Canada has been gradually rising to 400 in 2013 from 266 in 2005 - although 2014 saw a sharp drop.

The main market for the hides used to be American sport hunters returning home with their trophies. But after the United States made importing the hides illegal, the trade shifted to China.

"The market for polar bear hides in China reflects an increasing market for all furs going to China," said Cooper.

Still, Cooper said his study offers no evidence that exporting hides leads to more hunting or threatens the population of the bears.

Countries such as the United States have argued that all international trade in polar bear parts should be banned, just as is the trade in elephant ivory. Canada, together with Inuit groups which co-manage the bears, has always argued that the real threat to polar bears is declining sea ice caused by climate change

Cooper found that the increase in hide exports was largely due to hunters taking advantage of high prices and selling hides that they'd harvested in previous years. The number of bears hunted in Canada has remained stable at about 600 a year.

"It's clear to me that the polar bear does not meet the criteria for (increased protection)."

The bears are hunted for a variety of reasons, including for food, to ensure safety and for cultural affirmation.

Cooper suggested that banning all trade in the mighty Arctic predator might actually make conservation harder.

"You take away that incentive, you open the door to hunting not being reported and the potential of more bears being hunted."