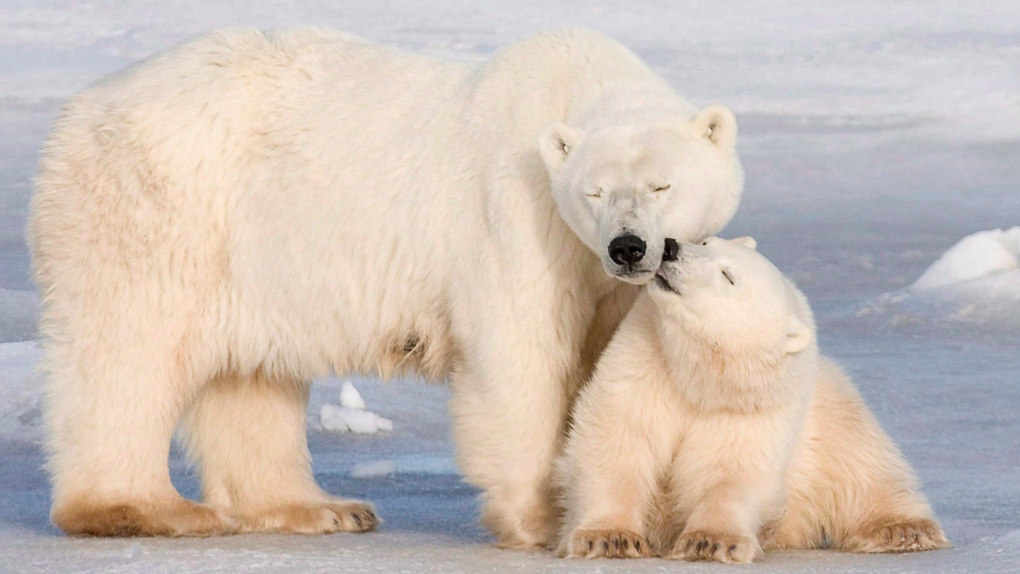 A polar bear cub nuzzles its mother in Wapusk National Park on the shore of Hudson Bay near Churchill, Man. on Nov. 4, 2007. (Jonathan Hayward / THE CANADIAN PRESS)

ANCHORAGE, Alaska -- A study of an Alaska polar bear population in summer concludes the bear's biology will not help stave off starvation in the face of global warming.

The study of southern Beaufort Sea polar bears by university, federal and private researchers over three years concludes they have no special ability to minimize energy loss during increasing periods of fasting brought on by climate warming, less sea ice and fewer hunting days.

The research rejects the idea that polar bears can avoid harmful declines in body condition in a sort of "walking hibernation," as suggested by 1970s research.

The paper published Thursday in the journal Science instead concludes that polar bears have no such ability to conserve energy and react like all other mammals when faced with limited food.

"We haven't known until now whether bears really reduce their metabolism in summer, which, if they did, may have offered a limited buffer from some of the negative effects of ice loss," said lead author John Whiteman of the University of Wyoming.

Fasting is a way of life for many animals. For polar bears, fasting can last eight months.

Their main prey is ringed seals. Hunting is most successful from April to July when seals use sea ice for rearing pups and molting.

In months following, ringed seals spend most of their time in water. Some polar bears retreat to land, where feeding opportunities are limited, or stay on sea ice that in recent years has retreated far north of the shallow, biologically abundant outer continental shelf.

"This paper gives us the first solid understanding of polar bear metabolism in summer, especially out on the sea ice over deep water far from shore, where bears have never been sampled before," Whiteman said.

The study found that activity and temperature patterns recorded for polar bears in summer were not comparable to patterns for hibernating bears in winter dens. The patterns were typical of food-deprived mammals rather than hibernating mammals, Amstrup said.

Karyn Rode, U.S. Geological Survey research wildlife biologist in Anchorage who was part of a polar bear fasting study published in 2012, said the new study confirms that "walking hibernation" does not accurately describe polar bears' energetic status in the summer.

"It's definitely a different line of evidence that further supports that they can't conserve energy when they're fasting," Rode said.

Additional studies are coming out, but scientists say it's already clear what needs to be done.

"We already know the answer to the question, 'What do we need to do to save polar bears from extinction?" Amstrup said. "All of the studies in the world won't help us there. If we don't deal with greenhouse gas emissions, those of us who have been studying polar bears for our whole lives will be nothing more than polar bear historians."